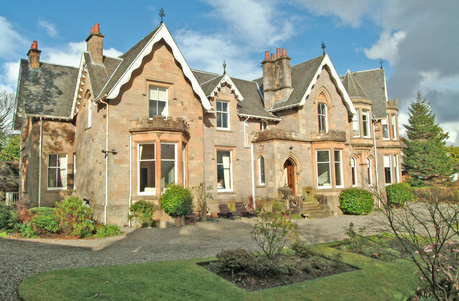 THE major part of a mansion built during the golden years of Helensburgh villa architecture has been put on the property market at an asking price of over £420,000.

Towerville, at 46 George Street, was built in 1858 and was one of the early works of renowned architect John M.Honeyman (1831-1914), who 20 years later was the architect of the Municipal Buildings in Sinclair Street — replacing an old theatre which had also served as the Town Hall.

They say: “The house was converted post war, and Towerville forms the major part of the property comprising a most impressive lower conversion of over 3,000 square feet which includes various ancillary wings and an additional very large, as yet undeveloped, basement area that contains five rooms and a wine cellar.”

Writing in the Helensburgh Heritage Trust bicentenary book ‘200 Year of Helensburgh’, Doris Gentles observes: “Towerville is a large, impressive Gothic villa in Scots baronial style with castellations, hoodmoulds, buttressed bay windows and quatrefoils to mention a few of the fascinating details of this house. The interior is an impressive as the exterior, with fine woodwork and plaster work.

John Honeyman (pictured) was born in Glasgow, the son of a prominent merchant who also had a house on Garelochside where the family spent the school holidays and enjoyed boating.

He was educated at Merchiston Castle School in Edinburgh, followed by the Universities of Edinburgh and Glasgow. He practised in Glasgow and became one of the leading domestic and church architects of the late 19th century.

Many of the buildings he designed are in Glasgow, although he was also responsible for St Michael's Parish Church in Edinburgh (1883), together with a number of churches and country houses across central Scotland.

In Glasgow, Honeyman built grand houses, churches, public and commercial architecture, including the Trinity Church (now the Henry Wood Hall, 1864), the Ca' D'Oro (1872), Rockville School (1877), the Barony North Church (1880) and the Elder Park in Govan. His publications include ‘The Dwellings of the Poor’.

He served as president of the Glasgow Archaeological Society and governor of the Glasgow and West of Scotland Technical College. He also took part in 1859 in raising the first corps of volunteer artillery in Dunbartonshire, and he continued as a commissioned officer of that body for ten years.