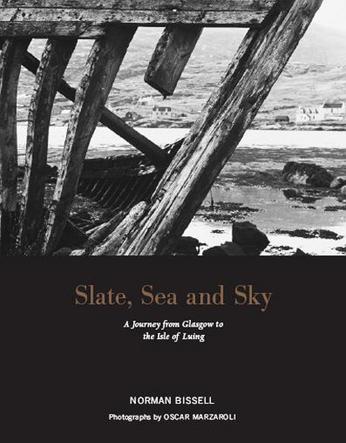 It was entitled "Slate, Sea and Sky - a journey from Glasgow to the Isle of Luing", and was a poetry reading by Norman Bissell accompanied by slides of photographs taken by Oscar Marzaroli.

Norman Bissell writes poetry, essays and reviews which have been widely published in literary journals, books and newspapers. He is also a very experienced teacher and lecturer.

His first poetry collection Slate, Sea and Sky, A Journey from Glasgow to the Isle of Luing, accompanied by photographs by Oscar Marzaroli, was published by Luath Press in January 2008. It received daily national press and radio news coverage and has been critically acclaimed by the Director of the Edinburgh International Book Festival and other poets.

His articles on cultural issues and book and music reviews have been published in The Herald, The Scotsman, the Scottish Educational Journal, The Keelie, Cencrastus, Chapman, Edinburgh Review, island, Northwords, West Coast, Classwork, the Luing Newsletter, in the books The Reckoning and Grounding a World: Essays on the work of Kenneth White, and in the papers of the Scottish Trade Union Research Network.

His interest in geopoetics and the work of Kenneth White led him to found and lead the Open World Poetics group from 1989 to 1999 and to become the director of the Scottish Centre for Geopoetics from August 2002 until the present.  He is currently researching and writing a biography of Oscar Marzaroli.

He has an MA (Honours) degree in philosophy and history from the University of Glasgow, and was principal teacher of history at Braidhurst High School in Motherwell and a member of the Scottish Examination Board history panel.

He has given lectures to undergraduate and post-graduate student teachers at the former St Andrew’s College of Education and the University of Glasgow, and at the University of Edinburgh Office of Lifelong Learning.

From 1996 until 2007 he was a full-time EIS Area Officer providing advice, representation, and training to EIS members working in nursery, primary, secondary and further education in much of west central Scotland.

He now concentrates on writing full-time from his home on the Isle of Luing in Argyll, where he is a director of the Isle of Luing Community Trust and Chairman of the Luing Horticultural Society. His other interests include ecology, natural history, walking and chess, having once played for junior Scotland in the Glorney Cup.