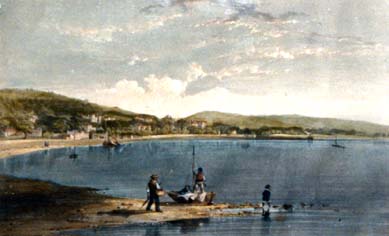 THE Anderson Trust annual exhibition for 2009 is a joint venture with Helensburgh Photographic Club entitled ‘Then and Now’.

The exhibition opened to the public on Saturday January 17 after a private ceremony the previous evening, and is on view until June in Helensburgh Library in West King Street during normal library hours.

Trustee Mary-Jane Selwood said: “Members of the Photographic Club were invited to photograph views and activities represented in some of the paintings in the Anderson Trust collection.

“Many of the paintings are of familiar local scenes, dating back over a hundred years, and local residents will, no doubt, find the comparison between then and now very illuminating. The photographers found the exercise both challenging and rewarding.”

David McGowan, president of the Photographic Club, expressed the viewpoint of the artist and the photographer when he commented: “It has been a revealing experience.

“The painter is free from many of the limitations of photographic technique, and the benefits of artistic licence have never been more apparent than in this exercise.

“To begin with, some of the viewpoints of the original pictures no longer exist or are inaccessible — or were they imaginary in the first place!

“A striking feature is the tree growth which conceals many features once on plain view and, inevitably, there has been development and new building.

“Timing of a similar conjunction of weather, sky and tide is another problem, and even with the flexibility of the modern zoom lens the choice of perspective available to the painter is difficult to mimic.

“While modern photographic technology means that it is no longer true to say that the camera does not lie, there are limits to what can be achieved even by digital manipulation.

“Our photographers have enjoyed trying to achieve closely comparable images, and at the same time to produce pictures which, despite the limitations, are in themselves pleasing to the eye.”