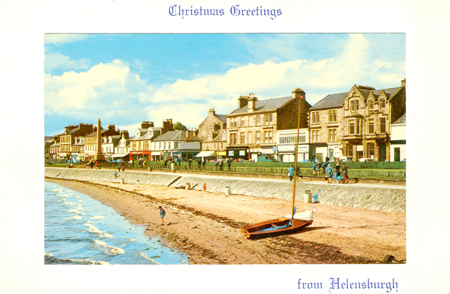 AN old photograph of the burgh seafront which has been gifted to Helensburgh Heritage Trust was a constant reminder of home to a burgh woman who lived in Canada.

Part of a Christmas card, it was a prized possession of Agnes Jeffrey McRae Wood, known to family and friends as Nan, who was born in the burgh in 1917 and died in Ottawa in 2003.

In September 2008 her solicitor, Joe Martin, and his wife Linda, stopped off in Scotland on their way to visiting their student daughter in Poland, and carried out the request in Nan’s will that her ashes be scattered on the beach.

The Rev Adam Plenderleith of Helensburgh Baptist Church and church member Brian Titchner joined the Martins on the shore in front of the Henry Bell monument and fulfilled her last wish — 59 years after she emigrated.

Nan, who worked as a civil servant, did not meet her husband David Wood, who was born in Helensburgh in 1902, until they were both making new lives in Canada. He died in 1989 at the age of 86.

Mr Martin said: “Nan was a client of mine and became a friend. When she died she had no remaining family and left her estate to charity.

“She talked a lot about Helensburgh and seems to have been very happy in the town, of which she had very fond memories. Although she made a new life in Canada, her heart was in Helensburgh.”