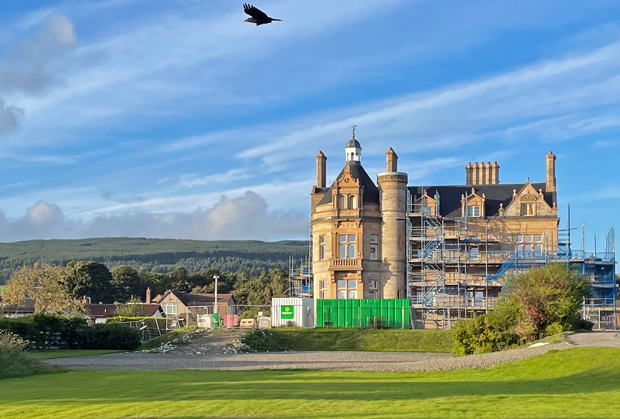 THE redevelopment of the historic Helensburgh seafront mansion Cairndhu — home for many years of the first Baron Strathclyde — is already attracting admiring glances.

The peerage became extinct when the Baron, Alexander Ure, died in the house on October 2 1928, and Cairndhu remained a private home until the Second World War when it was requisitioned by the Royal Navy for use as a degaussing base.

It was returned to private ownership in 1947 but three years later it was converted to become a hotel. Around 1984 it became a care home, and this closed in 2010.

PANACEA Homes of Glasgow are refurbishing the grade-A listed mansion inside and out and creating a mews home and semi-detached houses in the grounds in a sixteen home development.

“The apartments have each been individually designed to retain original distinguishing features such as the Anglo-Japanese ceiling by the esteemed Daniel Cottier, coffered timber panelling, skylights, and cornices,” say the developers.

“Each aspect of the house is being sympathetically addressed with architraves, fascias and doors finished in satin white paint, whilst the original ceilings are being prepared in conjunction with Historic Environment Scotland.”

It was built in 1871 in the style of a miniature French chateau by Leiper for John Ure, a prosperous 47 year-old Glasgow flour miller and merchant who went on to become a distinguished Lord Provost of Glasgow.

Mr Ure and his wife Isabella — whose Glasgow-born grand-daughter Mary Ure became a famous film and stage star — made it their family home, and he lived there until his death in 1901.

Their second son Alexander had a distinguished legal career, and in 1914 he was raised to the peerage under the title of Baron Strathclyde of Sandyford, County Lanark.

ill health forced him to resign from the bench in 1920, and he retired to Cairndhu. He was survived by his wife, and left estate of £150,180 18 shillings and one penny.