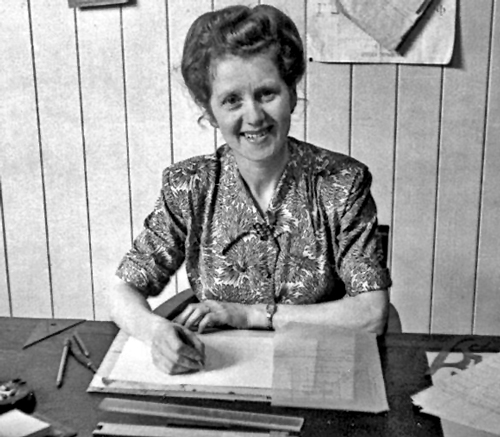 A 97 YEAR-OLD woman thought to have been the last surviving link with RAF Helensburgh and the Marine Aircraft Experimental Establishment at Rhu died recently at the age of 97.

In 2020 Helensburgh Heritage Trust presented Frances McLaren, who had no surviving close relatives, with a framed certificate of appreciation of her wartime service.

She kept it at her bedside in a nursing home near her home at Woodridge, Suffolk, and it was there when she passed away on June 24. At her funeral at Charsfield Baptist Chapel on July 9, at her request, the Dambusters theme was played.

Born Frances Shedden in Old Kilpatrick in 1923, she was very much a woman in a man’s world when she joined MAEE straight from Hermitage School.

Her intelligence, ability and personality established her as an important member of the team.

At that time she was not just the only female member of the scientific staff but at the age of 18 the youngest.

When she volunteered, she was living in Rhu because her family home was destroyed during the Clydeside Blitz.

Retired Merseyside newspaper editor and author Robin Bird, whose late father Bob also served at RAF Helensburgh as a photographer and knew Frances, said: “I knew Frances for several years from when I began investigating the MAEE history.

“She made a major contribution to my research, and the MAEE story would not have been so complete without her first-hand accounts.

“She had a wealth of stories to tell. The certificate of commendation was a unique tribute which she greatly appreciated.

“I will miss my telephone conversations with Frances and felt so close to her despite being hundreds of miles away. She told me that she did not fear death — as a Christian she would be reunited with her beloved husband.

“I take comfort in the fact that Frances had a good and long life, and I had the privilege of knowing this remarkable lady.”

While still at school Frances and three other girls were billeted in a house at Faslane called Almanarre, the home of Margaret and Roger Graham. They had no children and were about 55.

Frances told Robin: “Mr Graham received an official letter from the Admiralty saying the house and garden were needed for a railway across docks being built near Garelochead. This was around Christmas 1940.”

Her next home was at Armadale in Rhu, where Colonel Kenneth Barge and his family lived.

The Colonel was a deeply religious person who seemed to have an open house for local children. His home had large double iron gates directly opposite the pier where some huts were being built for the MAEE.

When the Hermitage school term started in August 1941 a school friend invited her for tea.

Her father was a senior scientist with the MAEE and when he learned that Frances had good exam results, he suggested she join the staff. His boss, Harry Garner, wanted replacements for the men who had gone to war.

She became the first scientific assistant at RAF Helensburgh, and she attended evening classes to obtain qualifications in electrical science and dynamics.

Frances started in the scientific office on the pier with Graham White and Frank O’Hara, supervised by Bert Smith.

He was in charge of the hull launching tank where model seaplanes and land planes were tested for ditching.

They recorded hydrodynamic findings, and she analysed the findings with a German-made Bosch machine called a metaphot, not unlike a microscope.

“I was still 18, but in the spring of 1942 I was involved in the research of rockets fired from a Sunderland,” she said. “Mr Smith was in charge of these trials.

“I sat in the co-pilot’s seat to make recordings of airspeed and altitude during firing. The Sunderland flew from Rhu to the RAF station at Bowmore, Islay.”

The rockets were attached to the womerings and the U-Boat target was a rubber dinghy belonging to MAEE’s marine section. Later it was discovered the aircraft wings had been under stress.

The pilot was a Canadian, Flight Lieutenant John Thomas Reed DFC. Aboard the flying boat on her maiden flight the crew surprised Frances with cakes from a tea shop in Helensburgh, which they devoured on the return flight.

Being a woman she had to use the mens toilet facilities on aircraft and at the base. When she went to use the ladies at the tea shop at Rhu she was told it was for customers only.

When Frances replied where she worked and that she could not afford to take tea, the owner said “go ahead then”, adding “anything for the war effort!”

However, the highlight was seeing the most secret bouncing bomb trials.

Robin said: “My father first met Frances when he took film of the Barnes Wallis bouncing bomb to be analysed by her.

“She was working at headquarters under armed guard, such was the importance of her work.

“Frances often sat in the co-pilot’s seat while firing rockets at a U-Boat target, which was actually a rubber dinghy. In fact she spent many hours at sea in a dinghy while conducting air to sea rescue trials.”

At MAEE she met and worked with James George McLaren, and they married in Edinburgh in 1946. Their marriage lasted 70 years.

When the MAEE returned to Felixstowe the couple set up home in Suffolk and Frances remained with the MAEE, working with colleagues John Allen and Helensburgh man James Hamilton. They became lifelong friends.

Her knowledge and hands-on experience at Helensburgh was put to good use at Felixstowe.

She eventually retired on health grounds, having injured her back when knocked down on the tarmac by an amphibious Seagull flying boat.

Her back hurt for the rest of her life.

Frances said: “People would not believe me when I told them a seagull had ended my career!”

Both John Allen, later Professor Allen who was involved post war in Britain’s atomic bomb project, and James Hamilton, later knighted for his contribution to the design of Concorde, passed away in recent years.

Before that all three visited an open day at Felixstowe after MAEE closed in 1956 where they were re-united with many former colleagues. They kept in close contact into old age.

She had one very narrow escape during the war. She was due to fly in the experimental Scion on March 15 1944, but colleague H.G.White took her place in the cramped observer’s seat at the last moment.

He was killed when the Scion crashed. James Hamilton was lucky to escape with relative minor injuries.