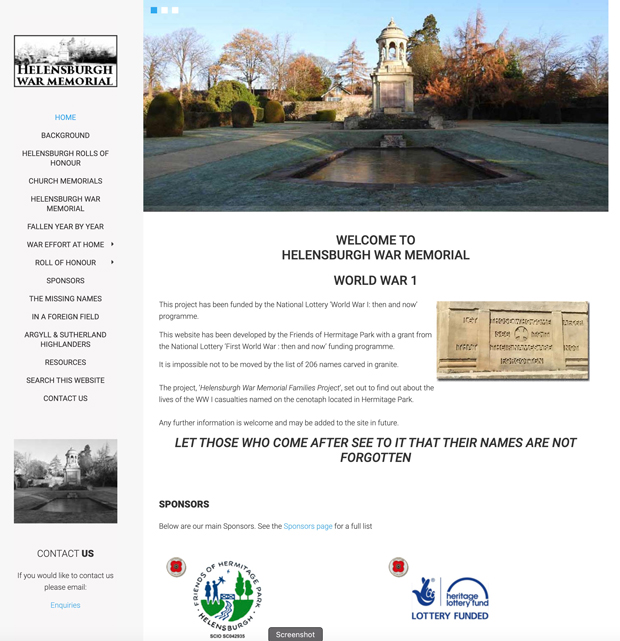 A team of four from the Friends of Hermitage Park spent more than a year researching the 206 casualties of World War One named on the cenotaph in Hermitage Park to create the website helensburghwarmemorial.co.uk.

Fiona Baker, chair of the Friends, said: “At times, the research has been heartbreaking, so many young lives lost, all over Europe and the Middle East as far as India.

“We hope the website might bring forward some further information from the descendants of the WW1 men, and one woman, remembered on the memorial.

“The altar at the memorial is inscribed ‘Let those who come after see to it that their names are not forgotten’, and we hope our project has honoured this.”

The Friends received a £10,000 grant from the National Lottery’s ‘First World War: Then and Now’ programme in May 2019, and the website, built by Jim Chestnut, was scheduled to launch alongside a DVD, pamphlet guide and memorial book — although these have been postponed until Armistice 2021 when public gatherings will, hopefully, be permitted.

The research for the project brought to light the names of Helensburgh men, and men who are associated with Helensburgh, who died in World War One but whose names are not on the war memorial — most likely because families simply could not afford to pay for their inscriptions.

There are 206 names listed on the WWI panel on the memorial. The ‘missing’ names not included add a further 59 men to Helensburgh’s contribution to the Great War, making a total of 265 who made the ultimate sacrifice.

Researcher Ann Stewart said: “With only four of us working on this project, there has been an opportunity to get quite close to the men named on the memorial. At times we have all had tears in our eyes over the lives they led and their deaths.

“It was a large project for so few of us, but it was worthwhile as it will be an archive for people searching for their ancestors.”