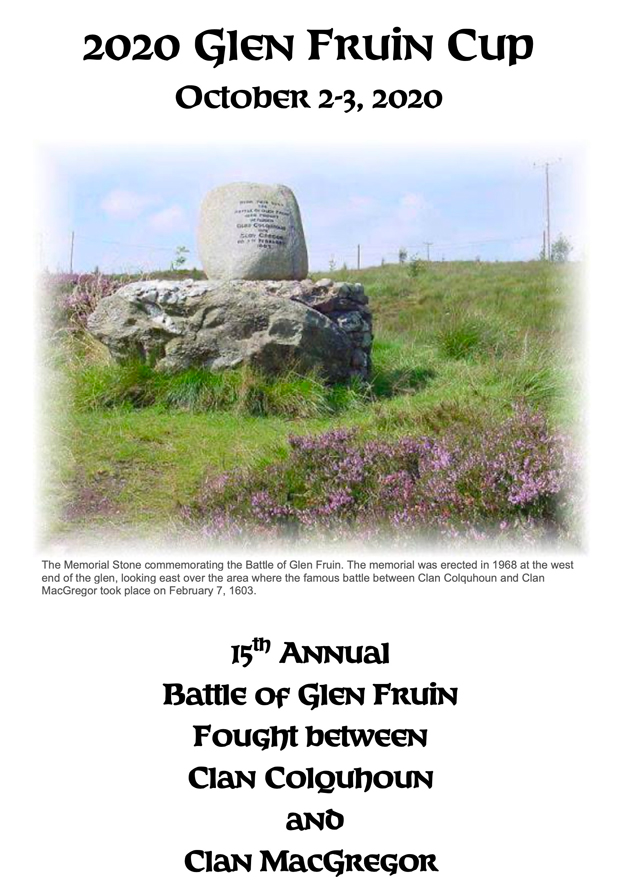 A LITTLE part of Glen Fruin can now be found at a golf club near Chicago.

The Merit Club successfully created its own monument to the 1603 Battle of Glen Fruin on the course at Libertyville, Illinois, 45 miles north of Chicago in time for the 15th annual club tournament called ‘The Battle of Glen Fruin’, created by member Mark Jensen after reading about the battle.

This club got in touch with Helensburgh Heritage Trust for help in creating a replica of the Fruin monument erected in 1968 at the west end of the glen, looking east over the area where the famous battle took place on February 7 1603. 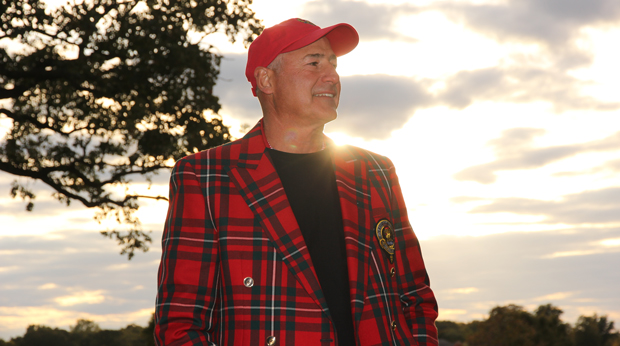 John Vernasco (right) worked with landscape architects to build the monument with rocks and stones from the Chicago area.

The club’s aim was that their own version should be ready for the 2020 year’s tournament at the start of October. They succeeded — and it certainly looks the part.

John said: “The 15th edition of the Battle of Glen Fruin was fought here at the Merit Club on Friday and Saturday October 2 and 3, and the MacGregors prevailed for the second year in a row!”

For the competition they split up the club into two teams based on the two clans, Clan Colquhoun and Clan Gregor, in what is the premier event of the club year.

Some changes had to be made to the normal agenda because of the precautions necessary for the pandemic, with only one piper instead of the intended pipe band travelling from Scotland.

“It was another memorable event,” John said. “What made it so enjoyable to all was not just the competitive golf played but the Glen Fruin rock monument dedication ceremony. The membership loved it!

“This was the first year we created a programme guide (left) and I think you’ll appreciate how we represented the Glen Fruin rock monument in the guide. It was important to have all the members understand what we were trying to replicate.

“We were able to create something close to the actual monument in Scotland, placing it beside the teeing area of the first hole.

“All the rocks, including the large boulder on the top, were found on the Merit Club property.

“The large boulder was near a bridge on hole 3 and the base rock was found in a field just north of the hole 8 tee area. This made the founder of our club, Bert Getz Snr., very happy.

“The etching was done by Troost Monument, a business that does etching for cemetery markers. 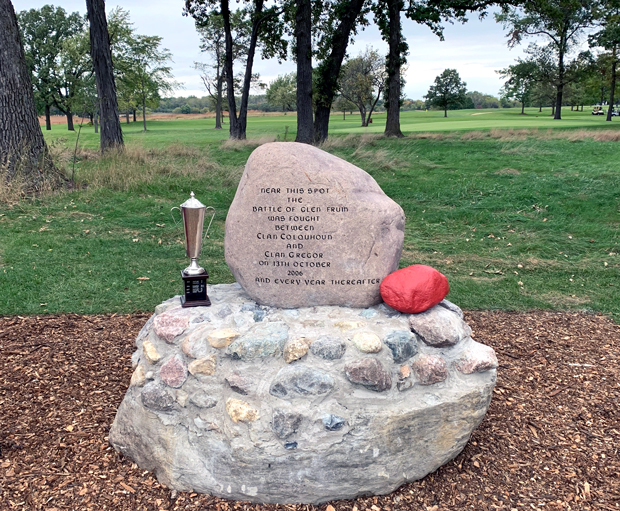 “We made a change to the wording on the rock in order to reflect the original Battle of Glen Fruin that took place on our golf club in 2006. I hope the Trust is not offended by our decision to vary the wording.”

Also in place is a copy of the explanatory information plaque designed by Sarah Cromer and written by Stewart Noble which was added to the glen monument when it was refurbished by the Trust in recent years.

John added: “We had 100 members participating, a record turnout. Everyone was very impressed with the monument and excited to have this as a major part of future battles and a celebration destination for the winners.

“The red rock beside the monument is placed there by the winning team signifying to everyone playing the golf course for the next year that the MacGregors were victorious.”

The story of the link between the club and the glen can be found here.