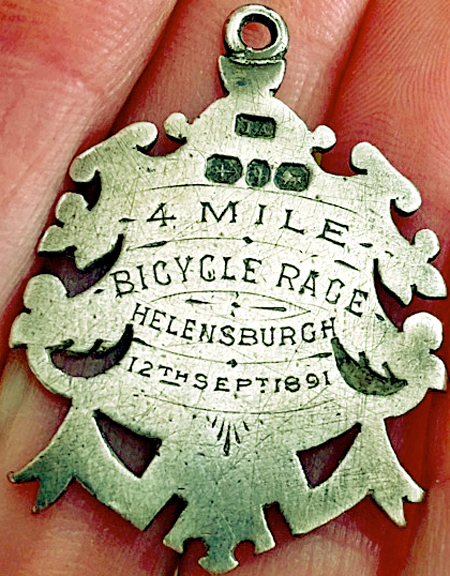 A HANDSOME silver medal found in America focussed attention on the history of cycling in the Helensburgh area.

It was found by Lesli Hiller, of Long Island, New York, among her grandparents belongings.

On the front it says ‘4 Mile Bicycle Race Helensburgh 12thSept 1891’, and on the back are initials which might be HB.

Lesli got in touch with Helensburgh Heritage Trust and asked for help in finding out more.

She said: “My first thought was that it was won by my grandfather, Edward Hughes, who was born in Glasgow.

“But one of my uncles suggested that it could have been either of my Scottish great great grandfathers, Malcolm Findlay — father of my grandmother Isabella Findlay — or William Guthrie.

“Both were born in 1867 and both lived in Glasgow when the 1891 census was taken in early April. Whether or not it is significant, William died in November 1893 of tuberculosis.”

The Helensburgh and Gareloch Times of September 1891 had no references to cycle races but there was a short piece about cycling being advocated as a cure for inebriation.

It stated: “A correspondent in the Daily Telegraph writes that two years since he had attained the weight of 17 and a half stone, took no exercise, and went to bed drunk on whisky every night, having consumed from 10-16 glasses of Scotch daily, he took to cycling.

“He gradually became aware of a remarkable phenomenon — he was losing his desire for whisky.

“He is now 43 years of age, weighs 12 and a half stone, has reduced his consumption of whisky to four or five glasses a week, and can cycle 100 miles a day!”

Cycling was certainly in vogue locally at this time. The Helensburgh Directory of 1887 lists the Helensburgh and Gareloch Cycle Club, with president Charles Kidston and captain ex-Provost John Stuart.

A few years later there was a Helensburgh Ladies Cycle Club.

Lesli commented: “Wow, this is amazing to me. I assumed it was a male relative — but who knows now!”

No more information has been established about the medal she found, but a history of local cycling can be found here on this website.