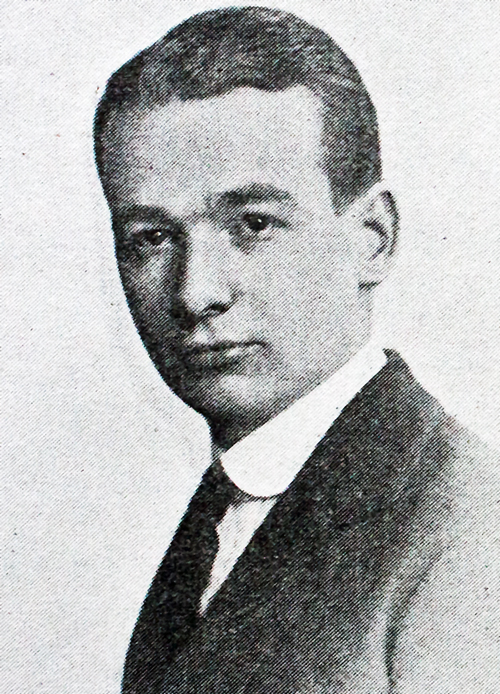 A YOUNG Cardross man who volunteered twice in World War One lost his life shortly after entering a trench with his platoon.

Second Lieutenant Frank Ritchie was killed in action near the village of Givenchy in Pas-de-Calais on May 25 1915 at the age of 22.

Frank was born in Govan on November 2 1892, the only son of shipping clerk Robert Crosthwaite Ritchie and his wife Maggie Jane Wilson who were married the previous Christmas Eve in Pollokshields.

They set up their family home at Kenmure, Church Avenue, Cardross, and Frank went to Hermitage School in Helensburgh.

He completed his education at the High School of Glasgow, then started work with Glasgow shipowners John Campbell & Sons. By that time his father was a shipping manager with the Anchor Line.

His interest in the military was shown through his training work with the High School cadet unit.

He decided to volunteer for war service early in 1915, and received a commission in the 3rd Royal Scots.

He travelled to Weymouth for training. Nine weeks later came Britain’s worst ever train disaster, the Quintinshill rail crash near Gretna on Saturday May 22

Helensburgh man Lieutenant James Crawford Bonnar of the 9th Battalion Argyll and Sutherland Highlanders, son of the town’s Provost, was one of 226 dead and 246 injured.

The accident, which involved five trains, happened close to a signal box with loops on each side on the Caledonian Railway main line, now part of the West Coast main line.

Those killed were mainly Territorial soldiers from the 1/7th (Leith) Battalion of the Royal Scots who were heading for Gallipoli. The precise number of dead was never established with confidence as the regiment’s roll was destroyed by the fire.

Their 21-carriage troop train travelling from Larbert to Liverpool collided with a local passenger train that had been shunted on to the main line, and then was hit by an express sleeper train to Glasgow which crashed into the wreckage a minute later.

Gas from the lighting system of the old wooden carriages of the troop train ignited, starting a fire which soon engulfed the three passenger trains and also two goods trains waiting nearby.

A number of bodies were never recovered, having been wholly consumed by the fire, and the bodies of the Royal Scots that were recovered were buried together in a mass grave in Edinburgh’s Rosebank Cemetery.

It was later established that the cause of the accident was poor working practices on the part of the two signalmen involved, which resulted in their imprisonment for culpable homicide after legal proceedings in Scotland and England.

The rail disaster was made much worse by the fire. The great wartime traffic and a shortage of carriages meant that the railway company had to use obsolete Great Central Railway stock.

The accident had a huge impact on the Royal Scots as a regiment and Frank Ritchie in particular.

Because of the terrible havoc done to all ranks of the battalion, Frank bravely volunteered to fill one of the gaps.

His services were accepted, and, although attached to the 2nd Highland Light Infantry, had his desire to get into action realised. Less than three months later he was dead.

An obituary in the Helensburgh and Gareloch Times stated: “It will be seen that he went to the front in a doubly heroic character, one of which being that he had not received nearly the amount of training insisted on in the majority of cases.

“He was well known and popular in Cardross, where as a golfing enthusiast he had many particular friends.

“To his parents, Mr and Mrs Ritchie, as well as to their only daughter, the keenest sympathy is extended.”

The circumstances of Lieutenant Ritchie’s death were detailed, and his many brave qualities affectionately related, in a letter received by his father from the officer commanding the 2nd HLI, Colonel A.H.Wolfe Murray.

He wrote: “It is with deep regret I have to inform you that your son Second-Lieutenant F.R.Ritchie, 3rd Battalion Royal Scots, attached to this battalion, was killed by German rifle grenade in the first trench at Givenchy, about five miles east of Bethune, yesterday at 5.30pm.

“His death was instantaneous, I am thankful to say, and he suffered no pain.

“The battalion had only just previously taken over the trenches, and your son was going round the trench at the time, which was occupied by his platoon,‘A’ Company.

“I asked an officer, Lieutenant Blackwood Porter, who is going home on leave tomorrow, to take his effects home with him. He will send them to you.

“He was buried this morning in a quiet place near the headquarters. I will see that his grave is properly kept, and I will ask the officer commanding the battalion who relieves us here to do so also.

“The chaplain of the 5th Camerons took your address, and is writing to you, but if there is anything else I can do or tell you I hope you will let me know.”

Letters received from Lieutenant Ritchie’s employers testified to the high esteem in which their late colleague was held by them.

At the morning service in Cardross Parish Church a week after his death, the minister, the Rev William Maxwell MA, referred very emotionally to the death of Lieutenant Ritchie and the sad bereavement sustained by his family.

He said that in the church where he was always present at the services, he would be much missed. 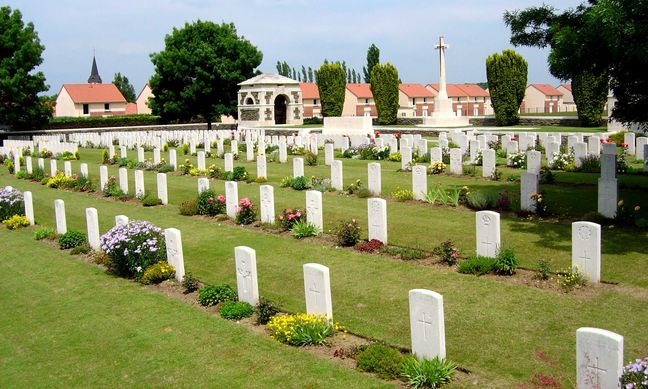 His grave is at Cuinchy, which remained during almost the whole of the war within range of German guns.

The cemeteries for British troops in the Commune were made by fighting units and Field Ambulances.

The British plots cover an area of 314 square metres, and include the Woburn Abbey section where the village man is commemorated.

Frank Ritchie’s name appears on both the Cardross village and the High School of Glasgow war memorials.