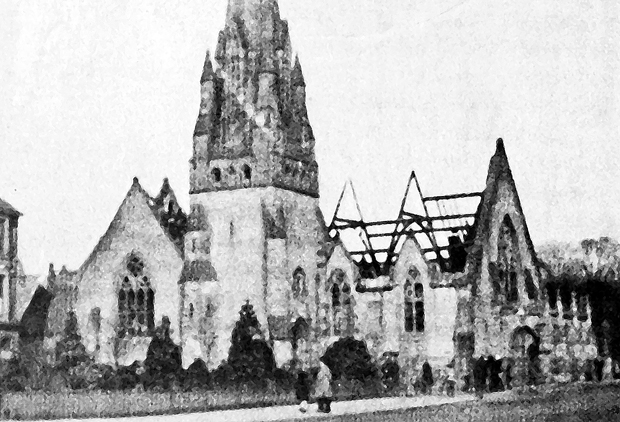 THE WORK of one of Helensburgh’s outstanding architects of years gone by can still be admired around the town.

Robert Wemyss FI Arch (Scot), LRIBA, is not as well-known as his contemporaries Charles Rennie Mackintosh and William Leiper, but he contributed a great deal to the look of the town centre and other areas.

From the arch which used to stand at the entrance to Helensburgh pier, to adding touches of style to tenement blocks, and masterminding the rebuilding of what is now Helensburgh Parish Church in Colquhoun Square after a devastating fire, the influence of Wemyss can be seen all over the town.

Robert Wemyss was born in Glasgow on March 5 1865, the son of John Wemyss, an Inland Revenue Officer, and his wife Phillis Pate.

He served his articles with the city practice of Duncan McNaughtan, and after completing his apprenticeship he worked there as an assistant.

Next he joined Burnet Son & Campbell where he was principally employed on railway work, and then for William Leiper with whom he was to have a long association and personal friendship.

He spent his holidays travelling, sketching and picking up ideas in England, Scotland and Ireland.

Wemyss set up his own independent practice in Glasgow in January 1896, and was admitted LRIBA on June 24 1912, proposed by John Bennie Wilson and the Glasgow Institute of Architects, which he had joined in 1907.

At the time of his admittance to the RIBA he was working in offices at 103 Bath Street, Glasgow, commuting from his home at 7 Glenan Gardens in Helensburgh where he was to remain until 1927.

In addition to his known works, his nomination papers stated that he had designed domestic and commercial buildings in Glasgow, but none of these has been identified.

He moved his practice office to 58 West Princes Street, and on October 6 1927, at the age of 62, he married 47 year-old Helen Macaslan or MacLaren, of Dunvegan, 35 Campbell Street, where they made their home.

The wedding took place in the Queen’s Hotel on the seafront and was conducted by the Rev A.D.Barr, the very popular minister of the then West United Free Church in Colquhoun Square.

He was a member of the church, an officebearer, and for a time a member of the choir. After the fire in 1924 he wrote a short history entitled ‘The Church in the Square’, possibly to help raise funds for the rebuilding.

Predeceased by his wife, he lived at Dunvegan to the advanced age of 90, and died on July 30 1955 in the Royal Infirmary in Glasgow after a long illness. The funeral was at Maryhill Crematorium. 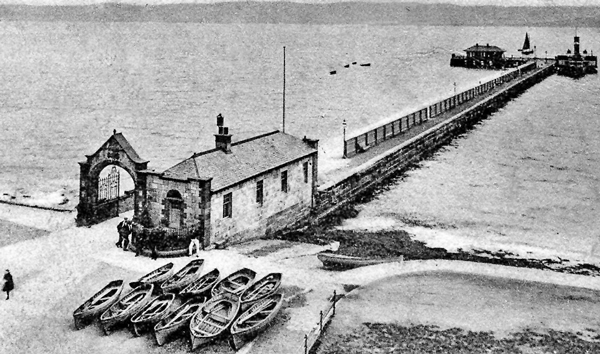 Particularly fondly remembered by older townsfolk was the elegant Victorian red sandstone arch he designed for the pier entrance in 1898. It was said to have become dangerous and was demolished in 1965.

Six years later he designed 74-78 West Princes Street in Arts and Crafts style. It is a grey harled tenement building which curves round to James Street.

The facades have ball finials, and a tall bleak chimney on the James Street side breaks the regularity. The red-bricked feature around the windows adds attractive colour to the building.

Waverley Place, 62-66 West Princes Street, has Jacobean details. It was built for a Mr John McFarlane, and is a most attractive red sandstone asymmetrical tenement building with corbelled chimney piece and delightful windows arched on the upper storey.

Doris considers that the charming tenement at 27 John Street, known as Loch Sloy Place, designed by him in 1896, with an unusual crazy paving pattern of the ground floor, is an example of his individual style.

Varied fenestration including Venetian windows to either side of a pend are attractive features of the facade.

Bourtrie, 25 Glasgow Street, was designed by him in 1898. In coloured stone at ground level and harling above, this splendid Free Style villa has two pedimented Venetian windows overlooking the south.

The variety of the fenestration on the east gable is eye-catching, especially the Wemyss touch of individuality in the lovely tripartite, stepped stone-traceried window. 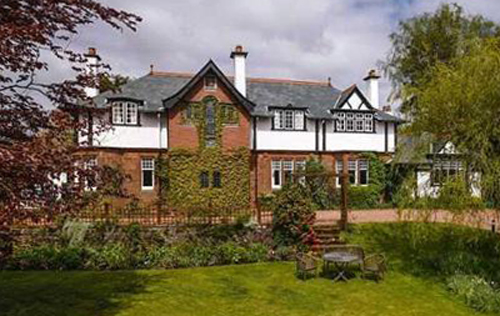 It has the red tiling and mock half-timbering details seen in William Leiper’s work in the area.

His delicate handling of the Art Nouveau details reflects his individual interpretation of the Norman Shaw influence.

His nearby Rokney, formerly Redcliffe, at 118 Sinclair Street is similar but has also a delightful variety of windows.

In 1907 he added a storey to the west wing of the Leiper designed Rosemount, 10 West Argyle Street, in what Doris considers “another example of the seamless join in the work of these architects”.

His regard for the work of Leiper ensured that the many extensions and additions he was involved in did not detract from the original.

He designed Braeriach, 4 Upper Colquhoun Street, in 1909, an Arts and Crafts villa with the usual details such as red sandstone and tiles, harling and timber of the surrounding Leiper houses without losing his individual touch. There are handsome wrought Art Nouveau gates to the front.

He designed the porch erected at the Old Parish Church in 1923, and it was dedicated ‘in memory of those who in time past worshipped here’. It remains as part of the Clock Tower, recently put up for sale by VisitScotland.

After a large part of the West United Free Church was destroyed by a major fire in 1924, he planned and designed the restoration which was beautifully and effectively carried out.

“This piece of work will remain a tribute to his skill and artistry,” Doris wrote.

One of his final commissions came in 1929 when he designed the open-air swimming pool on the seafront, a gift to the burgh from the then Provost, Andrew Buchanan.