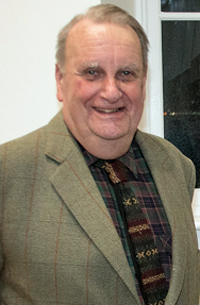 Bill, a retired solicitor who lived in Bridge of Allan, was a nephew of Nance Anderson MBE JP who donated her art collection to the burgh. He collapsed and died while on a family holiday at Melfort.

The funeral took place on Monday August 7 at St Saviour's Church, Bridge of Allan, and afterwards at Lecropt Cemetery.

After Nance's death Bill and his brother found two handwritten notes stating that she wanted her picture collection to be given to the town, and although this was not in her will, they decided to do this.

They set up the Anderson Trust Local Collection in 1981, and, to raise finance to meet costs, the companion Inistore Trust, both of which exist today. From an initial 34 pictures the collection has expanded to 117 works of art.