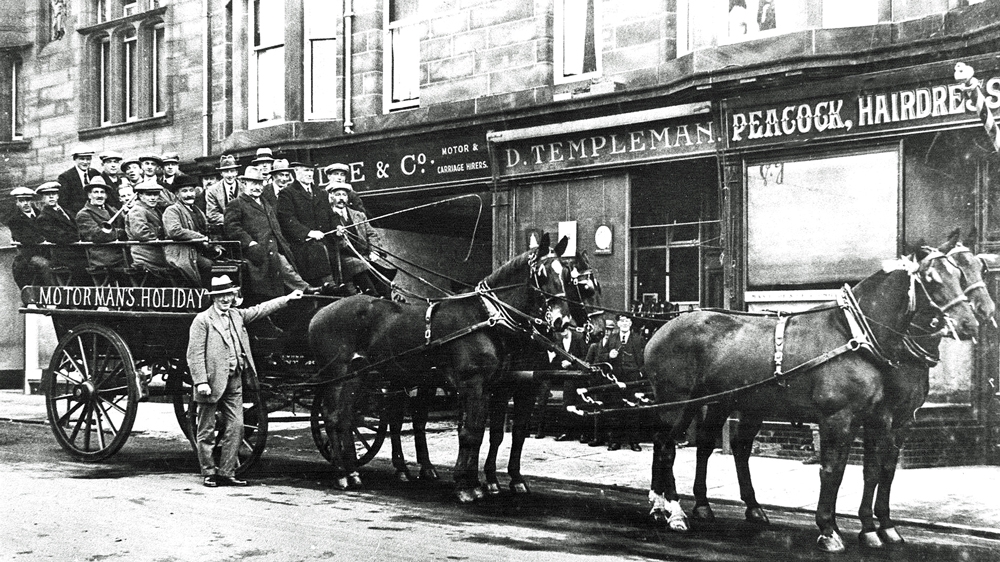 ONE of Helensburgh’s longest-running businesses was Waldie’s Garage, now a branch of Arnold Clark.

The first Waldie in business in the burgh was Adam Waldie, who had established a coach service by around 1820.

He ran the Royal Mail stagecoach to Fort William, drawn by six horses. The journey lasted twelve hours, with four changes of horse on route.

The same newspaper reported on July 22 1858 that Mr Waldie had been acknowledged for his service of omnibuses, provided for the last six years between Dumbarton and Helensburgh, by the presentation of a purse of sovereigns.

The Herald commented that, but for the narrowness of the road, they would have continued to Garelochhead.

The report added: “Given the incommodious, not to say unsafe, state of Helensburgh Quay, the omnibus will attract large numbers of people.”

The entrance was between grocer W.G.Christie and shoemaker David Templeman, underneath what is now the Mackintosh Club.

It offered open and closed carriages, two and four-wheeled dog-carts, waggonettes, omnibuses, lorries, spring-vans, carts, waggons, hearses and mourning coaches. The horses were kept in stables at the rear. 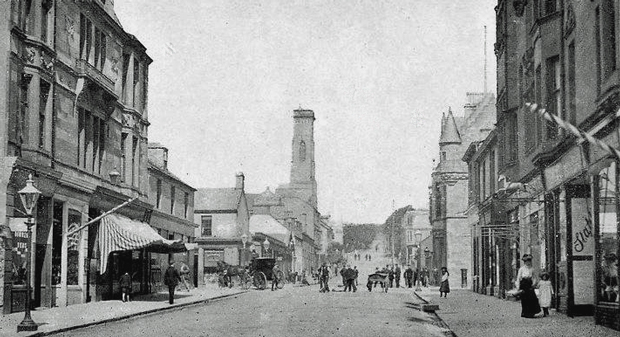 Waldie’s was listed as cab proprietors and carters in Battrum’s Guide to Helensburgh 1875, with premises at 45 and 47 Sinclair Street.

John Waldie, who lived nearby at 17 East Clyde Street, died from diphtheria on February 22 1876 at the age of 38, and the business was continued by former Cardross man Hugh Snodgrass, who might have been a relative.

The premises also housed the Quarantine Kennels under the jurisdiction of H.M. Board of Agriculture, which Mr McMurrich ran. Animals were brought to the kennels and kept for six months.

Born in 1855, James Reid (right) was brought up in the Bathgate area and trained in Edinburgh as a chemist. For a number of years he was manager of a pharmaceutical chemist’s business in the capital.

A shrewd businessman, Mr Reid bought prime sites. He was the owner of a substantial chunk of real estate in the town centre, 22-34 Sinclair Street.

At that time, the property consisted of four shops, a bakehouse, and twelve residential addresses.

According to an entry in the Helensburgh and Gareloch Times for October 25 1893, he sold to the Conservative Club a portion of the ground in Sinclair Street that he had recently purchased from the Trustees of the late Mrs Janet Rodger — making a handsome profit in so doing.

When Mr Reid and Mr McMurrich bought over Waldie’s business, Mr Reid was also the outright owner of the land and property as well.

No.34 Sinclair Street went on to become the site in 1894 of the famous Honeyman and Keppie designed Conservative Association building, now the Mackintosh Club.

According to ‘North Clyde Estuary: An Illustrated Architectural Guide’, by Walker and Sinclair, published in 1992, 22-32 Sinclair Street was rebuilt in 1898 as Carlton Buildings, described as a “muscular range of tenements”, the architects being Burnet and Boston.

James Reid entered the world of aerated waters production in 1889 when he took over the business of the late Alexander Williamson Jnr which had operated at 6 West Clyde Street for over 20 years.

A wide range of soft drinks were being produced, with much emphasis placed on the purity of the carefully filtered water used.

Initially there was little competition for his aerated water business, but by 1893 the Comrie brothers from Glasgow had set up a custom-built factory in East King Street. The Fairy Springs water supply came through solid rock drilled to 200 feet.

The response from James Reid came the following year when he built the 160 feet-long Lily Springs factory at 67-69 James Street.

This attracted huge local interest because of its concept, scale and very high standards in a building with artistic and architectural features.

It was the first sizeable building in the town to have electric light. There was spacious office accommodation, connected by telephone throughout, a stock room and a large washing machine.

His aerated water products were based on water sourced from a spring tapped by a diamond-tipped drill into a depth of 500 feet, and contained in a seam of sandstone from James Street to George Street. 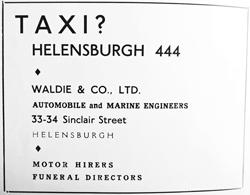 A good description of district transport in the early 1900s was given by local artist Gregor Ian Smith in an article he wrote in 1975. It conveys the atmosphere Waldie’s operated in.

“Transport was simpler in the old days,” Gregor wrote. “You either swam, sailed, walked, used a bicycle . . . or took a cab. As a result, most of my memories are associated with transport by horse.

“They pulled a variety of vehicles and came in all shapes and sizes. There are still a few of us who are able to recall the departure of the mail from Helensburgh by coach-and-pair.

“And probably still more who remember the ubiquitous cab, and cabby complete in tile hat, claw-hammer coat and riding boots.

“Cabs met all trains, often in association with badge-porters — a group of licensed luggage carriers whose headquarters were at the station.

“Cabs, broughams or landaus from Waldie’s or Frew’s stableyards conveyed us on urban and limited rural journeys day or night.

“Tales of cabs and cabbies varied from the sublime to the horrific. As youngsters we stole rides by sitting on the rear axles until the cabbies used their whips to dislodge all but the most foolhardy.

“And when a cab-horse was transferred temporarily to the shafts of the municipal watering cart, we followed it barefoot as the double-spray laid the summer dust.

“In winter we were still literally rubbing shoulders with cabs. For when the snow fell we sledged down Sinclair Street, down Colquhoun Street, Charlotte Street, Grant Street, indeed any streets with enough snow to speed the ‘runners’.

“Unfortunately cabs demanded their fair share of the highway even in snow, and there are veterans in our midst who have sledged at high speed under the heaving belly of a cab-horse and lived to tell the tale.”

Waldie’s also provided the local mail posting service, as well as a service from Helensburgh to the Rhu to Rosneath ferry and nearby villages.

The introduction of the motor vehicle was embraced by the firm, replacing horse-drawn transport.  By 1920 it also had a West End branch at 20 Glasgow Street, and an important part of the business was as funeral undertakers.

A limousine service was also provided from 1924, using Darraq vehicles, but horse-drawn cabs also continued in daily use until 1939, when the last three plied for hire from Helensburgh Central Station.

In December 1927 a motor ambulance car was acquired by the directors of the Victoria Infirmary and was stationed at Waldie’s premises in Sinclair Street. 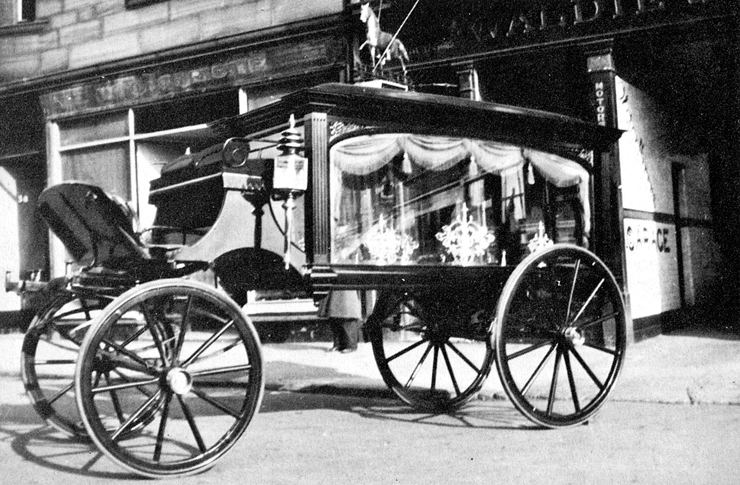 The ambulance was available day or night at the usual rate of 1s 6d per mile, with a minimum charge of 5 shillings, by telephoning the garage. It was called out 85 times during 1928, travelling to Inveraray, Lochgoilhead, Dunoon, Larbert and Glasgow.

From at least 1932 Waldie’s was run by William Aitkenhead, who had moved from Glasgow to live at Hilden, 45 Charlotte Street. He served on Helensburgh Town Council and became a Bailie.

Messrs Brown had started their service in 1919, initially to Shandon, but extended later in the year to Garelochhead. However it was agreed to grant the licence to Brown’s.

In the 1939 Helensburgh Directory, Waldie & Co. was listed as funeral undertakers, motor hirers, motor car renovators, and carting and motor transport contractors, 32-34 Sinclair Street, with the garage at 19 Maitland Street.

In 1949, Brown’s Buses took over the Waldie’s bus service from Helensburgh to Rhu and Gullybridge. Two years later Waldie’s long-established tours were taken over by Cameron Coaches of 65-67 East King Street — the premises once occupied by the Fairy Springs lemonade factory.

The Helensburgh and Gareloch Times said that ‘these popular sight-seeing tours’ would continue to run daily round the Three Lochs, the Eight Lochs, the Trossachs, Pitlochry and Largs.

The ‘Loch’ fleet of new luxury coaches were a familiar sight in the district. The firm was particularly well known in Arrochar, where they ran a service between Arrochar and Tarbet for many years.

Cameron’s themselves were taken over by the Foy brothers of Garelochhead Coach Services in 1956.

Waldie’s managing director from about 1947 was William Aitkenhead’s son George, who was educated at Larchfield School and Glasgow Academy and went virtually from school to service in the Second World War.

He survived serving in corvettes ln the horrific convoys to Russia, and later survived again when, on a Mediterranean convoy, his corvette was sunk and 87 shipmates lost their lives.

This experience left its mark in lung trouble which was to plague him for the rest of his life, but he went on to take part in the invasion of Sicily and serve in the coastal forces supporting the D-Day landings in Normandy.

After the war he returned to the town, served his apprenticeship as a motor mechanic, and, at the age of 25, took the helm.

It was a position he held for over 20 years, and he remained with the firm after it was taken over by Burmah Oil in the late sixties, working for them as general manager and a director. Like his father, he served on Helensburgh Town Council.

During his time in charge the Sinclair Street entrance with the well-known golden horse above it was closed and converted to a shop, with the entrance becoming a forecourt created in East Clyde Street — with the golden horse moved to the top of a wooden petrol kiosk.

In 1972 George, whose wife Isobel ran the Sinclair Street drapers shop G.Arthur MacInnes Ltd. for many years, left to go back in business for himself with Helensburgh Motor Company in John Street.

He was succeeded at Waldie’s by Angus Black, who managed the business for Burmah.

Another aspect was recalled by Carolann Cameron on the Helensburgh Memories website. She wrote: “Waldie’s garage had a pend in Sinclair Street and on a Sunday they showed films on a big screen for their staff.

“They put out chairs and people could take their wives and girlfriends. My Dad took my Mum and they watched ‘Mutiny on the Bounty’. My Dad said it was thrilling as the sound echoed and was loud.”

Pat McGinley, who first worked there as a petrol pump attendant, went on to become an apprentice mechanic. Later he and sister Kathleen moved to George Aitkenhead’s West End Garage, which is now Helensburgh Toyota.

He said: “The workshop had a concrete ramp inside which was to allow horse and carriages access to an upper level which at that time still had old coffins stored in it.”

Elizabeth Trueman said that in the late 1950s that upper part was taken over and became a nut and bolt factory — run by Stephen Newall and Bob Park — and later it moved to James Street. At the far end was the bodywork and spray painting part of Waldie’s.

She added: “I worked in the nut and bolt factory. One day I walked down the ramp to go down to the toilet and the door to the undertakers was open and there was a body in a coffin. I got such a shock they had to send me home.”

Waldie’s continued to trade there until Arnold Clark took over in the early 1980s. For a time they also had a temporary car showroom across the road where the flats beside the Old Parish Church clock tower now stand.

What happened to the golden horse? It has been said that it was stolen by sailors in a drunken prank, but, according to the late Harry Daly, it ended up in the Burmah Oil boardroom.

Much of the former Waldie’s premises is now owned by furniture and removals firm R.B.Steel Ltd., while the main workshop and showroom is a branch of Arnold Clark.