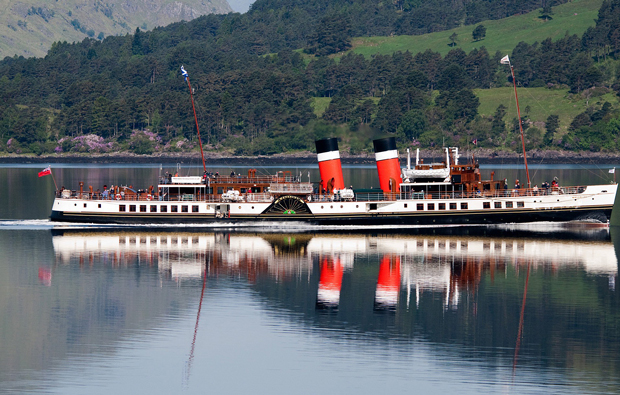 SAILINGS from Helensburgh aboard the world’s last sea-going paddle steamer began on the May Bank Holiday weekend.

Regular summer sailings from Helensburgh and Kilcreggan begin on Friday June 16 — the 70th anniversary of the steamer’s maiden voyage.

Named after Sir Walter Scott’s first novel, the ship was built for the London & North Eastern Railway to replace the paddle steamer HMS Waverley, which was sunk in 1940 while evacuating troops from Dunkirk.

Launched on October 2, 1946, from the former A&J Inglis yard in Glasgow, she was later towed to Greenock where her triple expansion engines were fitted by Rankin & Blackmore. These have now become one of the ship’s major attractions.

Waverley’s captain, Ross Cochrane, said: “She is a very special ship full of history and charm. There is a trip for everyone to places to be explored and enjoyed for both young and old.

“Every passenger who comes aboard helps this beautiful ship continue to sail and I would encourage everyone to come and enjoy a trip on her.

“Some of the most stunning scenery in the world can be found on the west coast of Scotland, and Waverley offers a unique way to experience it. I look forward to welcoming you on board.”

Fares start at £19 for adults and there are discounts for senior citizens. Children under 18 are half fare and under fives go free. To book tickets or for more information visit www.waverleyexcursions.co.uk.