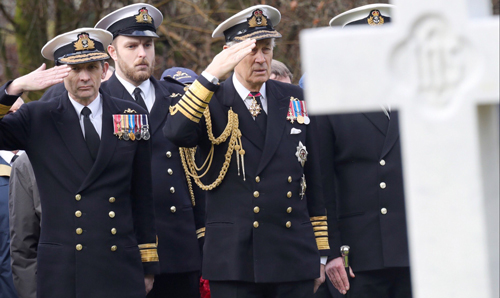 A SPECIAL ceremony was held at Faslane Cemetery today (January 26 2017) to honour 32 submariners who drowned 100 years ago in the K-13 submarine disaster in the Gareloch.

The steam-propelled submarine sank in the Gareloch on January 29 1917 after sea water entered her engine room during her sea trials. All those in the engine room were killed.

During the ceremony submariners past and present paid their respects, along with Commonwealth War Graves Commission representatives, submariners from HM Naval Base Clyde at Faslane, and the Submariners Association.

Colin Kerr, director of external relations for the Commission, said: “CWGC has looked after the graves of the men of the K-13 for a hundred years. This is what we do.

"It is very important to us that attention is still paid to these men and that their graves are visited and their lives remembered.”

Jim McMaster, chairman of the Submariners Association, added: “It is natural that we commemorate those 32 unfortunate men who died in this accident, but we should not lose sight of the fact that this was also a very successful submarine rescue for 48 men.

"Even by today’s standard this is a major achievement.”

Rear Admiral John Weale, head of the UK’s submarine service, said: “The men who perished in K-13 were, in many respects, pioneers.

“Today’s submariners recognise that the submarines they operate are not only safer, but also more effective, because we have learned from the experience of our predecessors.

"In this respect, the special bravery, ethos and comradeship of submariners and the submarine service endures.”

Also at the service were Shirley Thomas and her family, who travelled from Sheffield for the occasion. Her great-grandfather, Fred Porter, was a 37-year-old submariner who died on board K-13.

“We’ve always wanted to come up and pay our respects, and the 100th anniversary seemed like the ideal time,” said Shirley.

“Fred was in the navy on ships, then he went on the submarines — my grandmother told us he did this because it was better pay. We’re all really proud of him.”