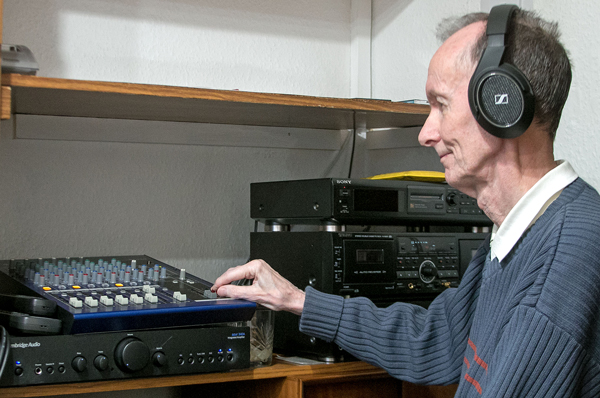 FORTY YEARS ago during the last week of December, a group of Helensburgh people sat round a microphone and recorded an experimental version of a talking newspaper for the blind.

They were so successful that the experimental version actually became the first edition of Headline Helensburgh, the talking newspaper serving the blind and otherwise visually handicapped in Helensburgh and District.

Modelled on one already in existence in Wales, it turned out to be the first in Scotland, pipping Dunfermline Sound by a few weeks.

Now there are nearly 70, most of them in the Central Belt but also covering the more rural areas north and south.

Last Wednesday evening a small team — including three of the founder members — gathered to record the first 2016 edition of Scotland’s oldest registered talking newspaper for the blind.

It has changed over the four decades. A monthly half hour of local news, views and sport has broadened into an hour-long twice-a-month cassette, with higher sound recording quality and the ability to be converted, when required, to a cd.

The development of news services on local radio stations has reduced the demand for the free service, but it still has some 30 blind recipients keen to hear the news from two issues of the Advertiser.

The full story of Headline Helensburgh can be read here. The picture shows Peter Douglas, who has recorded the master cassette from the start, at work on the mid-December edition.