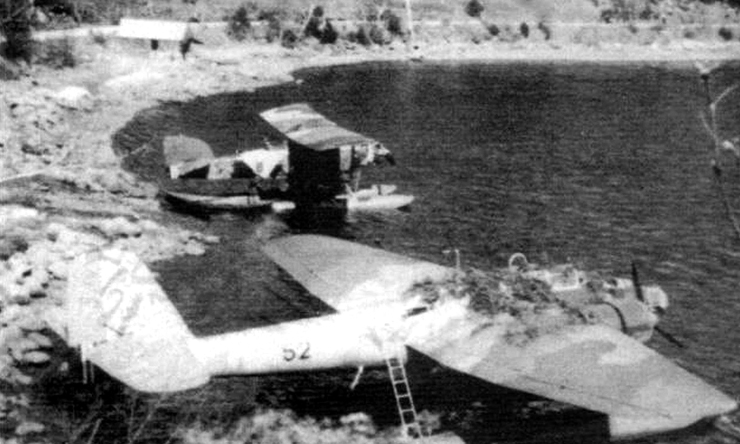 HELENSBURGH was known for a time during World War Two as ‘Little Norway’.

That was also the name given to a Norwegian Air Force base formed in Toronto during the autumn of 1940.

The Canadian base was set up following the German occupation of Norway earlier that year.

Norwegian pilots and aircrew in Canada were re-equipped and trained with American-made Northrop float planes. They then operated from Iceland conducting U-Boat searches.

But the original ‘Little Norway’ — a base for a newly formed free Norwegian Air Force — was first established at Helensburgh earlier that year.

Within days of the German invasion of Norway on April 9 1940, a Norwegian pilot and crew flew a battle scarred German-made Heinkel 115, serial number 52, to Scotland.

Retired Merseyside newspaper editor Robin Bird, author of two books about the Marine Aircraft Experimental Establishment which spent the war years in the burgh and Rhu and on the Gareloch, has researched the Norwegian element of the MAEE story.

He said that Pilot Haken Offerdal landed on the Gareloch having been directed there by the British authorities — and the aircraft naturally attracted much attention when it landed and beached at Rhu.

Although it was within the confines of the MAEE base, a number of inquisitive school children managed to get on to the beach for a close up view of the huge menacing Heinkel. They included ex-Provost Billy Petrie, who remembers the incident well.

“I was playing at the Ardenconnel football field with a friend, Robert McLean, when all of a sudden we heard an aircraft engine,” said. “It had a different sound to British aircraft.

“It was escorted by a second plane. We could see the Swastika markings, although white crosses had been painted across them. It flew low over the Rhu Church tower — so low that I could see several men lying in the gun turret.

“We ran home as we had an air raid shelter, but my father pointed out there had been no air raid sirens. They landed in the Gareloch. They opened up Rhu Village Hall that night as the men had nowhere to sleep, but the next day accommodation was found for them.”

Although it was within the confines of the MAEE base, a number of inquisitive school children managed to get on to the beach for a close-up view of the huge menacing Heinkel, including young Billy.

Norway had ordered six Heinkel 115s just before the outbreak of World War Two to beef up its marine air force wing  made up of obsolete Flyvebaatfabrikk MF 11 floatplanes.

Offerdal and his aircraft only left the fighting in Norway as the Germans advanced. His Heinkel developed engine problems while fighting the Germans, but he decided to make the hazardous flight to the UK.

Offerdal realised that the Heinkel 115 would make a ‘war prize’ for the British as it was a modern, three-seater floatplane, powered by two BMW nine cylinder air cooled engines.

He wanted, too, on reaching the UK to report fully the serious situation in his homeland, and his plan was then to return to Norway in an aircraft supplied by the RAF. But he was soon joined by three more escaping Heinkel 115s, one of piloted by Hans Andreas Bugge.

Meanwhile, the situation in Norway was confusing — and changing daily.

Just in time, King Haakon and the Norwegian Government escaped the country aboard HMS Devonshire, and a Government in exile was formed.

Only then could Norwegian forces in Britain continue the war against the Germans despite their air force having battled against the superior Luftwaffe during the invasion.

The majority of the Norwegian aircraft, both land and sea-based planes, were obsolete bi-planes. Only the German-built Heinkel 115 floatplanes were a match for the enemy who had made them.

And only the Heinkels had the power and versatility to make it safely to land on the Gareloch.

A few obsolete Hover MF 11 floatplanes attempted the long flight to the UK via the Shetlands. These canvas-covered bi-planes were powered by a single British designed Armstrong Siddeley engine.

They had open cockpits and limited flying capacity without re-fuelling.

They were only ever intended for coastal reconnaissance, and were not designed to be warplanes. Consequently the MF 11s flying to the UK either turned back, went missing, or were shot down by the British.

One MF 11 biplane, serial number F328, left Norway with Offerdal’s Heinkel F52 (pictured right at Rhu). It was lost on the way.

At Helensburgh Bugge was ordered to form a Helensburgh Group air force and await further instructions.

The Group was to consist of the Heinkels, an expected Arado 196 float plane that had been captured in Norway, and any Norwegian MF 11 that might make it.

But the eagerly awaited Arado 196 floatplane, another war prize, crashed on arriving at Rhu on April 26 1940.

Its pilot Commander C.W.Byras, RN, misjudged his landing on calm water, and wrecked the Arado.

This was a major setback. MAEE had wanted to thoroughly inspect the Arado to compare its performance with the Blackburn Roc floatplane undergoing trials at Helensburgh.

The Arado was a superior aircraft to the Roc, designed as a seaplane as opposed to the Roc which was a land-based aircraft fitted with floats.

One Roc floatplane had crashed at Helensburgh during trials in November 1939 because of ‘uncontrollable directional instability.’

But the British would not get their hands on another Arado 196 until the end of the war.

The Heinkels at Helensburgh initially remained under the control of the Free Norwegian Government in exile. The fighting in Norway entered its final phase on April 26 1940, and effectively lasted until May 28.

During this period Helensburgh continued to be ‘Little Norway’ a rendezvous point for Norwegians escaping Norway.

The bullet-ridden Heinkels were repaired at the Blackburn Aircraft factory in Dumbarton, and prepared for special operations.

The Helensburgh Group was strengthened by two British Empire flying boats converted for military use, Cabot and Caribou.

The Heinkels were to be used for leaflet drops and special operations to Norway and the Norwegian aircrew and ground crew were found lodgings in the burgh.

How many sorties the Heinkels carried out is not known. Some reports say such flights were aborted as being ‘dangerous and suicidal.’

Carbot and Caribuo were both destroyed during a secret mission to Bodo.  One Heinkel 115 was kept at Helensburgh for appraisal trials with the MAEE.

Although all the Heinkels were taken over by the RAF for special operations, the Norwegian aircrews at Helensburgh were not absorbed into the RAF but were trained in the use of seaplanes.

The Norwegian Government in exile decided to reform its air force in Toronto, Canada, equipped with American-made Northrop floatplanes.

Bugge took charge of training aircrew in the use of the Northops at their  new  base in Canada, which then took over the name ‘Little Norway.’

Once then men were trained they moved to Reykjavik in Iceland as operational squadrons.

There was no hutted camp of equipment waiting for Bugge and his companions in Iceland, so they set up base from scratch.

In freezing conditions the Norwegians worked in tents until huts could be erected. Despite the challenge Bugge soon had his 330 Squadron fully operational.

By June 1941 the Northrops were in action against the Germans conducting U-Boat patrols.

Sadly, Bugge and his crew went missing during one such flight on April 25 1942. Their Northrop never returned to base.

He was awarded his country’s Air Force Cross and War Cross posthumously.

Robin Bird said: “The fact that Bugge established a ‘Little Norway’ in Helensburgh seems to have been somewhat overlooked — not least as we celebrate the 70th anniversary of VJ Day and the end of World War Two.

“He and other brave Norwegians who were initially based at Helensburgh after the fall  of Norway had mixed fortunes in the months and years that followed.

“Their time at  ‘Little Norway’ in Helensburgh was brief, but long enough for them to reform and continue the fight to free Norway of German occupation.”

MAEE itself — which made a major contribution to the war effort — left its wartime home in August 1945 and returned to its previous home in Felixstowe.