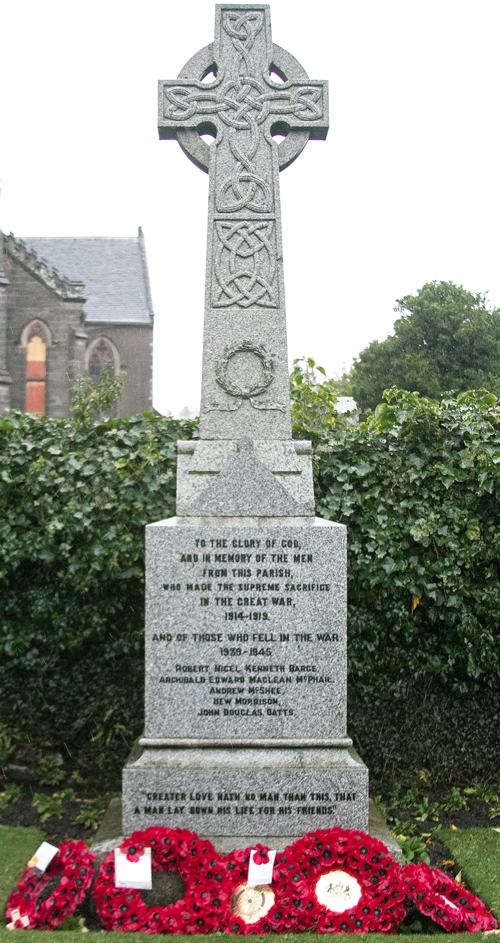 EACH Remembrance Sunday a Poppy Cross is placed at the Rhu War Memorial on the village green in memory of men who died while serving at RAF Helensburgh in World War Two.

RAF Helensburgh was the cover name for a secret wing of the Royal Air Force, the Marine Aircraft Experimental Establishment, which tested experimental flying boats.

The flying boats were kept at purpose-built hangars and slipways to the Gareloch near the Ardencaple Hotel.

Some 357 men and women served with RAF Helensburgh, which had its officers mess at the then Royal Northern Yacht Club and its headquarters next door at Rosslea, now a hotel.

Houses in and around Helensburgh were requisitioned to accommodate personnel. Ardenconnel in Rhu was the sergeants mess, while Shorelands was where the WAAFs lived.

The establishment consisted of people from all over the country, the Commonwealth, plus locals.

Retired Merseyside newspaper editor Robin Bird, whose late father Bob was the MAEE photographer, said: “It was generally regarded as a good posting, a pleasant place to spend the war.

“We have seen some of the postcards sent home depicting Rhu. However, there was never a mention of the work being carried out.

“For it was all top secret, and for aircrews that flew in the flying boats it was potentially dangerous.”

Flying experimental aircraft in all weathers resulted in accidents. The worst was when Saro Lerwick L7248 crashed into a hill near Faslane after taking off from Rhu on October 21 1941.

All seven people aboard, including a civilian recorded as being Mr Such, lost their lives.

Robin, who has researched MAEE in great depth and written two books about it, says that there does not seem to be an official list of fatalities at RAF Helensburgh or of its crews who flew land-based planes from Prestwick and Port Ellen.

The first production Sunderland Mk11, W3967, crashed off Faslane, after taking off from Rhu, just a month after the Saro Lerwick disaster.

There was only one survivor, Vincent Drake, who was badly injured and spent some time in hospital in Helensburgh.

There is uncertainty, too, about the number of fatalities when Walrus L2179 crashed on July 17 1942.

Then Graham White, a tough Yorkshireman and graduate scientist, was killed when the Short Scion fitted with an experimental hull crashed and sank during MAEE trials on the Gareloch. Frost on the wings was blamed.

At the end of World War Two operations at Rhu ceased and MAEE returned to Felixstowe where it had been at the outbreak of war.

However, flying continued from Prestwick or Port Ellen until the end of 1945 when three more fatal crashes happened.

“The irony was that the deaths included experienced pilots who had seen action and survived,” said Robin.

MAEE had a detachment of three Mosquitoes at Port Ellen.

Mosquito pilot Squadron Leader Arthur Jacques and his co-pilot Flight Lieutenant Eric John Savill were assigned to RAF Helensburgh in the summer of 1945.

They had served in the ‘Strike Wing’ Mosquito 235 Squadron based at Banff in Aberdeenshire, and had been involved in numerous dog fights and attacks on enemy shipping.

In just one week Jacques shot down three Messerschmitt Bf 110 twin engine fighters. His reward for courage and devotion to duty was a bar to his DFC and a ‘safe’ posting to RAF Helensburgh.

On October 25 1945, Jacques and Savill were taking part in rough water trials for the MAEE and successfully dropped six experimental depth charges off Islay.

On the seventh run in Mosquito DZ579 Jacques dived from 4,000 feet and levelled off at around 30 to 40 feet above the choppy sea to drop another depth charge.

However the depth charge must have caught a wave badly — causing a splash that ripped off the port tail. The Mosquito banked violently and crashed, killing both men.

The same month of October 1945 claimed the life of another experienced MAEE pilot, Flight Lieutenant Carswell, and his crew in Wellington NA929, then in December 1945 Boston bomber BZ332 killed its crew.

Robin added: ”This is why a Poppy Cross is placed on Rhu War Memorial every year in honour of those killed while serving with RAF Helensburgh.

“This year, 2015, also marks the 70th anniversary of MAEE leaving Scotland and the three fatal crashes of 1945.

“The men and women of the MAEE, besides living in the local community, used its shops and pubs.

“The Rhu Inn was a favourite watering hole for test pilots and aircrew. It is a sobering thought that the last pint they enjoyed before a crash was probably in the Inn.”

Robin has suggested on several occasions in recent years that there should be a permanent memorial to the men and women of MAEE, perhaps situated at Kidston Park overlooking Rhu Hangars. So far however, no progress has been made.

Robin donated a small engraved polished wood memorial carved in the shape of an aircraft to Helensburgh Heritage Trust, and it is on the wall of the Heritage Room in Helensburgh Library in West King Street. However the room is currently closed because of alteration work.