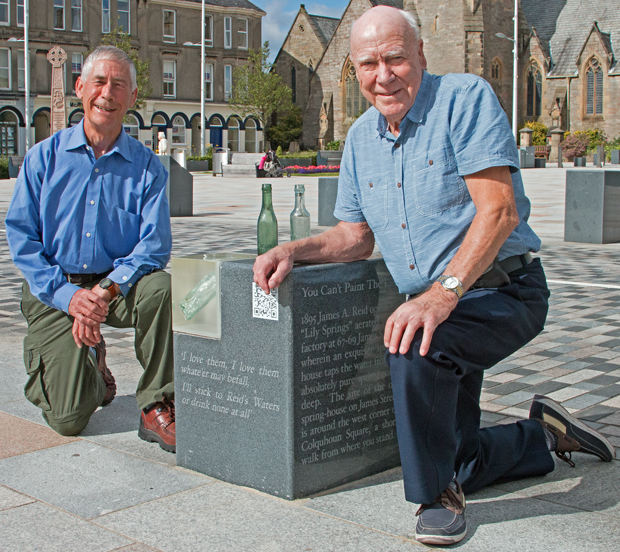 THE TOWN of Helensburgh made a major contribution to the history of Scottish lemonade, thanks to businessmen such as James A.Reid.

This was recalled by a visitor to the town in September 2015. Ian Patrick and his wife Anne, who live in Bristol, travelled north to see where his great uncle, James Arthur Reid, lived and had his own pioneering lemonade factory.

The couple were guided to the former lemonade factory in James Street, now an Argyll and Bute Council works depot, and the Reid family home a block and a half further up the hill by Helensburgh Heritage Trust director Alistair McIntyre.

Alistair, himself an expert on the old lemonade bottles often found in the town and district, said: “It was fascinating to meet Ian and his wife and hear what he knew of the family’s past.

“It was also a pleasure to show them the places they knew of. The family home was Hilsrig, now Inistore, at 58 James Street, and Ian had some old photographs of the house when it was covered in ivy.”

Possibly the first occupant of Hilsrig was a Miss Lydia Walker around 1864, and she lived there for some 20 years.

In 1887 it was occupied by a Henry Raper, then three householders at once — Mrs McMillan, James A.Reid and Walter G.Rough.

However by 1890 James A.Reid was the sole owner with his wife Charlotte, and it remained in his family until 1929 when it was bought by Nance Anderson MBE JP, who gifted the Templeton Library to the town and who changed the name to Inistore.

Born in 1855, James was brought up in the Bathgate area and trained in Edinburgh as a chemist.

He worked in both Bathgate and Edinburgh, and then for a number of years as manager for a Mr Fairgrieve who ran a pharmaceutical chemist’s business in the capital.

Confusingly there was also a Central Apothecaries’ Hall, which was first in Sinclair Street and then in West Clyde Street.

James was not yet involved in making aerated waters, but he did sell them for firms such as Duncan & Flockhart of Edinburgh, Fraser and Green’s of Glasgow, and Messrs Schweppe’s.

He was a shrewd and successful businessman, buying prime sites at the foot of Sinclair Street. One such site included four shops, a bakehouse and thirteen households.

He entered the world of aerated waters production in 1889 when he took over the business of the late Alexander Williamson Jnr which had operated at 6 West Clyde Street for over 20 years.

A wide range of soft drinks were being produced, with much emphasis placed on the purity of the carefully filtered water used.

An advert of the time described the water as coming from the ‘celebrated Ballyvoulin Springs’.

Probably because of the extra work following the acquisition of the Williamson business, James went into partnership with a chemist, Robert Young, and the Helensburgh Apothecaries’ Hall now also bore the name ‘Reid and Young’.

Because of a change in the town’s east-west numbering, it became 9 West Clyde Street.

This side of the business continued until 1910, when it was sold to another chemist, William Taylor whose brother Henry continued in business until he retired in 1973.

Initially there was little competition for Reid’s aerated water business, but by 1893 the Comrie brothers from Glasgow had set up a custom-built factory in East King Street. Its water supply came through solid rock drilled to 200 feet.

The response from James came the following year when he built the large 160 feet-long factory at 67-69 James Street.

This attracted huge local interest because of its concept, scale and very high standards in a building with artistic and architectural features.

It was the first sizeable building in the town to have electric light. There was spacious office accommodation, connected by telephone throughout, a stock room and a large washing machine.

The aerated water products sold by James A.Reid were based on water famously sourced from a spring tapped by a diamond-tipped drill into a depth of 500 feet, and contained in a seam of sandstone running from James Street to George Street.

This was the deepest such spring in Scotland. Accessing water from such a depth was regarded as unique in British engineering history at that time, widely discussed in learned journals.

Many bottles bore the legend ‘From 500 feet deep’, and up to 60,000 bottles a day could be prepared and filled. Slogans included ‘Pure as the Lily’ and ‘You Can’t Paint The Lily’ which is derived from a passage in Shakespeare.

Aerated waters were exported to the United States, the West Indies and Spain, and they had contracts to supply soft drinks to Clyde steamers — and no doubt many other commercial outlets.

Two other aerated water manufacturers in Helensburgh also sourced their water from the same spring, though they all gave their own products a unique identity.

Thus, the Reid’s product was known as ‘Lily Springs’, this name being embossed on the bottles, along with an image of the flower and a Shakespearean quotation pertaining to the lily.

Bottles from the factory of all shapes, sizes, styles and colours can still be found to this day, and Alistair has exhibited many examples in the Heritage Trust’s Heritage Room in Helensburgh Library in West King Street — half a block from where they originated. 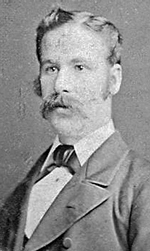 Production flourished for many years, but after a long illness James — who was also a partner in the burgh carriage and later garage firm of Waldie & Co. which he formed with William McMurrich about 1894 — died at Hilsrig on July 4 1919 at the age of 63.

His widow and family trustees continued to operate the business for some years.

In the 1930s and 40s the factory was owned by Arthur Richardson Pollock and then his widow until around 1950, when it was taken over by Garvie’s of Milngavie.

Sadly, production at Helensburgh ceased in 1957, when the water supply is alleged to have become contaminated by an algeal growth.

The Garvie’s firm continued in business at Milngavie, but they too in turn closed their doors in the 1990’s, and now houses occupy the site of their factory.