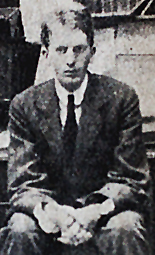 THE OLDEST surviving transmission recording made by Helensburgh-born TV pioneer John Logie Baird has been saved for the nation — thanks to a burgh businessman who wishes to remain anonymous.

The phonovision shellac disc, dating back to September 20, 1927, is the world’s oldest surviving 78 rpm video recording and features images of Baird’s famous ventriloquist dummy Stookie Bill, which he used when developing his revolutionary mechanical scanning broadcasts.

The collection, which also includes the log books used by Benjamin Clapp while conducting Baird’s transatlantic television trials and the world’s first known use of the acronym TV, was put up for sale in April and looked almost certain to go to a private collector overseas.

But a temporary export bar was placed on its sale until September 29, and the University of Glasgow has confirmed that it is currently in the process of buying the collection.

The purchase is being made possible with the financial support of a successful local businessman, who wishes to remain anonymous, who lived for 20 years in Helensburgh. He chose to help with the acquisition in order to keep the collection in the UK.

He said: “I am delighted the collection has been saved and is now coming home. It charts such an important period of modern engineering history so I felt it could not, and should not, leave these shores to move abroad. It needs to be shared for future generations.

“John Logie Baird was a Helensburgh man and a Scottish pioneer who helped change the world, and with his ties to the University of Glasgow I think it is only right and proper that this important collection should be coming to the university. Hopefully it will help inspire future pioneering engineers.”

The Baird items, which are still in the process of being bought thanks to the generous donation to the university, will be an important addition to its John Logie Baird archives.

Baird was a student at the University of Glasgow from 1914-1915, when he studied engineering. He cut short his studies when he tried to voluntarily sign up for war duties in 1915, but was turned down on health grounds.

The inventor's son, Professor Malcolm Baird, who is president of Helensburgh Heritage Trust, said: "The Baird family are happy with this outcome. Three generations of us studied at Glasgow University, going back to my grandfather John Baird (Arts and Divinity, 1860-1868), then J.L.Baird (1914-15, cut short by the war), and my sister Diana and I in the 1950s."

Culture Minister Ed Vaizey said: “It’s fantastic news that the John Logie Baird collection has been saved for the nation. He and his team made the UK a world leader in 1920s television technology, including the first-ever transmission of trans-Atlantic television pictures.

“This collection will be incredibly important for the study of the history of television, and I’m delighted that it will remain in the UK.”

■ The wedding dress worn by the inventor's mother — maiden name Jessie Morrison Inglis, who married the Rev John Baird in 1878 — is part of an exhibition of Victorian dresses currently at the Kelvingrove Gallery in Glasgow.

Baird's daughter, Diana Richardson, recalls that it was acquired by the Burrell Collection after her aunt Annie's death in 1971. It had been kept at 'The Lodge' in West Argyle Street for over 90 years, and it is in immaculate condition.

■ Malcolm Baird is to be interviewed on the BBC Scotland radio talk show 'Sunday Morning' this month. The interview will be conducted via the CBC studio in Hamilton, Ontario, saving him a 3,000 mile flight. This arises from Jackie Macadam's piece in the October issue of 'Life and Work'.