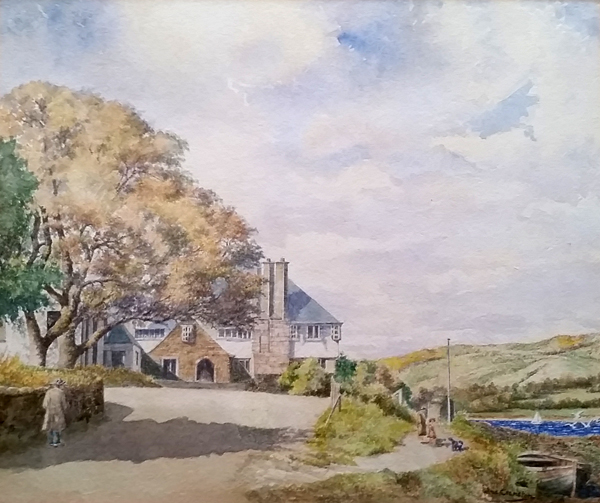 THE discovery of a painting of Edwin Lutyen’s 1896 extension for Princess Louise of Rosneath’s Ferry Inn, built in 1880, prompted a query to Helensburgh Heritage Trust.

The Arts and Crafts style building was painted by Andrew Cranston of Loch View, Suffolk Street, Helensburgh, and the painting’s owner asked if anything was known about the artist.

Obituaries published in the then Glasgow Herald and the Helensburgh and Gareloch Times in January 1954 provided some answers.

Andrew Cranston was a teacher of English by profession, and taught for 17 years in Glasgow’s Bellahouston Academy. Later he became headmaster at Croftfoot, Mount Florida and then Kinning Park Schools.

He retired in 1942 and moved to Lochview, Suffolk Street, Helensburgh, with his wife.

Their only son, also Andrew, was killed in action in Normandy in 1944. He was a Lieutenant, serving with the Bedfordshire and Herts Regiment, but on attachment to the Royal Ulster Rifles. He fell on July 10 in the battle of Le Mesnil, and is buried in the war cemetery at Ranville in Normandy.

A keen and prolific water colour painter, Andrew had pictures hung at the annual exhibitions of the Royal Scottish Society of Painters in Water Colours. In his younger years he wrote and acted for an amateur drama company in Glasgow.

A Deacon of Helensburgh Congregational Church, he produced paintings of the town churches and Rhu Parish Church, and gifted them to the congregations.

Burgh man Gordon Burgess recalls: “His wife used to do a weekly house to house collection on behalf of the Red Cross during the war years and was known in our family as the penny a week lady. She was sadly changed by the loss of her son.

“As part of my efforts in the Writers’ Workshop I wrote an essay entitled ‘Remembering Mrs. Cranston’. It probably contains some errors of fact, but it was written as a memory of childhood some seventy years after the events described.”

He wrote: "I was interested to see a reference on your website to my grandfather, Andrew Cranston.

"As a small boy, I spent several happy summers with my grandparents in the late 1940's and early 1950's, and was a regular visitor to the old outdoor swimming pool on the pier — where I learnt to swim, under the redoubtable Mrs Kirk — and the putting green on the front, which must have been a pretty easy one, as I recall often scoring less than 36 for the 18 holes!

"I can't add much to the biographical details about my grandfather. I was only 12 when he died in 1954, but I can let you know that his wife, Effie, came to live with our family in Broughty Ferry, near Dundee, and eventually lived to see the arrival of my daughter in 1974, at the ripe old age of 94.  She was a stalwart member of the Baptist Church in her latter years.

"I was interested to read Mr Burgess' remarks about the effect the death in combat of her son, Andrew, in Normandy in 1944, had on her.

"Of course, I was too young at the time to appreciate the enormity of the death of one's child, but I do recall finding my grandmother a bit cheerless, albeit unfailingly kind, throughout the final twenty years of her life. I do wish I had been more sensitive to the reason for her sadness.

"Also, my interest in this side of the family — my mother was their daughter — was re-awakened this summer when I found myself in Normandy, and, almost by accident, located my late uncle's grave in the Ranville War Graves cemetery. My oldest son, and my daughter and her young family, were with me, and it was a profound experience.

"I am fortunate enough to have one or two of my grandfather's water-colours on my walls.  He was a multi-talented man. Sadly, most of his talents passed me by!"