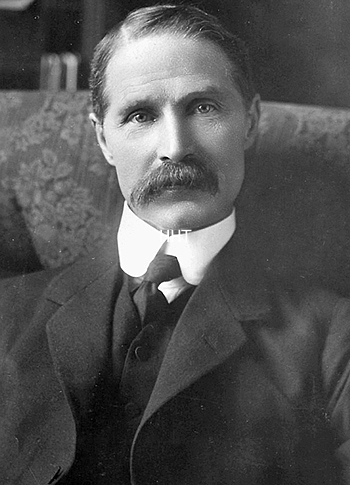 THE RESPONSIBILITY of being Chancellor of the Exchequer during the First World War was a huge one for Helensburgh man Andrew Bonar Law.

But in 1917 the man who would become Prime Minister had to undertake his state duties while burdened with the terrible sadness of losing his two elder sons in action.

Bonar Law was born in Rexton, a small village in eastern New Brunswick, Canada, on September 16 1858, the youngest of five children, and he also had two younger half-sisters.

His father, the Rev James Law, MA, was a Scottish Free Church minister, his mother Elizabeth a member of the Kidston family of rich merchant bankers which played such an important part in Helensburgh’s history.

Tragedy struck for the first of several times in his life when his mother died in childbirth when he was only two.

He worked as a boy on his father’s smallholding until, at the age of 12, he went to live with his mother’s Kidston cousins in Helensburgh, where their family home was the now demolished Ferniegair.

After school and university he worked for the Kidston family business and then in the iron industry, but his dream was of a political career.

He was married in 1891 to Dumbarton shipbroker’s daughter Annie Pitcairn Robley, and they had four sons and two daughters.

But she died suddenly in 1909 at the age of 42, collapsing after apparently recovering from a gall bladder operation, and it was a shattering blow to Bonar Law.

He had entered parliament in 1900 at the age of 42, in the middle of the Boer War, as Conservative and Liberal Unionist MP for Glasgow Blackfriars and Hutchesontown.

In 1911 he became leader of the Conservative Party, and when war broke out in 1914 he became a member of a coalition government with the Liberals.

1916 was a gloomy and worrying year for him as he experienced for the first time the anxiety of a father whose son is exposed to daily peril in the front line.

He was deeply devoted to his eldest son, James Kidston Law, and was distressed that he had joined up at the outbreak of war without telling him — an attitude he was afterwards ashamed of.

He did not object to his second son, Charlie, joining up straight from school although he was barely 17.

Early in 1916 Jim, who had transferred from the Royal Fusiliers to the Flying Corps, completed his training and joined an Observation Squadron in France.

In July 1916 he had a serious crash, trying to avid a convoy of motor lorries which crossed the airfield as he was taking off. He had serious concussion and was given prolonged sick leave in England.

Lord Beaverbrook, a close friend, wrote: “Jim had gone out a boy who Bonar understood. He returned a man whom Bonar failed to understand. His father found a difficulty in adjusting himself to the new relationship.”

The first son to be killed was the high-spirited and charming Charles John Law, who was educated at Miss Johnston’s School in Helensburgh and at Eton.

He was in Germany studying at Weimar at Christmas 1913 as war loomed, but as he was only 17, he was not interned and was allowed to return to England, arriving 36 hours before war was declared.

He joined the 3rd King’s Own Scottish Borderers and, commissioned as a second lieutenant, was sent overseas to Egypt, and was soon promoted to Lieutenant.

He wrote his last letter on April 16 and said: “My dearest father, We are just going into a large action and I hope it will be a success and that we shall scupper the whole lot of Turks.”

Three days later he was reported missing at the battle of Gaza. He was just 20 years and two months old.

For many weeks it was thought, on the strength of a German newspaper report, that he might be a prisoner of war, but there was no further news.

About the middle of June, just when it seemed certain that he had been killed and hope had almost vanished, a message was received from the Vatican that his name was among those of prisoners in Turkish hands.

Bonar Law had numerous letters of congratulations, but alas his hopes were yet again to be cruelly disappointed.

Unbelievably there had been a mistake and the word ‘not’ had been omitted when the message was deciphered.

One tribute to Charlie read: “He was a young man of great promise, a great favourite with everyone who knew him, and, in the homely words of one of his close friends, ‘one of the best’.”

Another friend wrote to the Times about him and said: “Those who were privileged with the friendship of Charles Law have suffered by his death a loss which to them will not, and to his family cannot, be repaired.

“He was the embodiment of all that is best in public school life. He played all games with enthusiasm and he loved the open air. He was modest, affectionate, and full of the joy of life.

“He was intensely popular with his brother officers, and, as I know from letters which have been received, he was beloved by the men he led.

“His death marks the breaking of yet another lamp which, having shone so brightly over the home, was surely destined to shed it radiance far afield.”

Worse was to come for the Chancellor and his family.

After Jim’s accident he had returned to France but had not been involved in combat missions.

In July 1917, now a Captain, he was testing machines and wrote to his father complaining of boredom, but adding: “It is a safe job anyway which will commend itself to you.”

In September, at his own insistence, he was posted for the first time to a fighter squadron. At this period the casualty rate among fighter pilots was very high.

After a week of fighting he was shot down on September 21. The body was never identified, and his name in inscribed on the memorial to missing airmen at Arras.

This second bereavement came as a terrible, almost overwhelming, blow to Bonar Law. For the time he was incapable of work, sitting despondently gazing at nothing.

Beaverbrook persuaded him to go to France to see Jim’s brother officers and find out what had happened.

He saw the Squadron Commander, talked to pilots who had fought along with Jim, then asked if he might see a plane his son had flown.

He was shown one riddled with bullets from a mission a few days earlier. He climbed into the cockpit and asked if he could be flown in it, a request which was declined.

He sat in the cockpit alone for three hours, and afterwards seemed less melancholy.

From France he wrote to his schoolboy son Richard, later to become a Conservative MP: “I was very proud to hear the way they talked of him. They all spoke of Jim as an exceptionally good pilot.”

The Chancellor seldom spoke about his loss, but he wanted time to recover from these blows and he resigned as Leader of the House and Conservative leader.

In the 1918 General Election he was elected member for Glasgow Central.

Other Conservatives were enthralled with Prime Minister Lloyd George and were considering leaving to join a new party Lloyd George was planning to form. 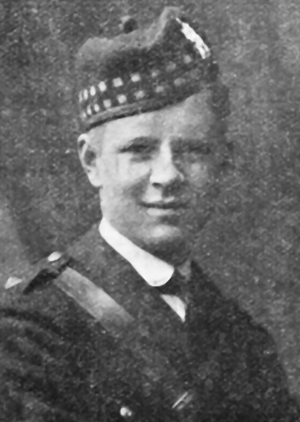 This roused Bonar Law, and he persuaded them to end the coalition, forcing Lloyd George to resign — whereupon King George V invited Bonar Law to form a new administration.

He became Prime Minister at the age of 64 years and 37 days.

He proposed what he called a ‘Tranquility Manifesto’ in an attempt to help Britain recover from war damage.

But he himself, a teetotaller but heavy pipe and cigar smoker, felt increasingly unwell and was diagnosed with throat cancer, forcing his resignation in May 1923 to be succeeded by Stanley Baldwin.

The shortest serving Prime Minister of the 20th century, he died six months later on October 23.

He wanted to be buried in the family plot beside the north wall of Helensburgh Cemetery beside his wife and sons, but as he had been Prime Minister the family agreed that the final resting place of his ashes should be the Nave in Westminster Abbey.

Jim and Charlie’s names are inscribed on the war memorial in Hermitage Park.