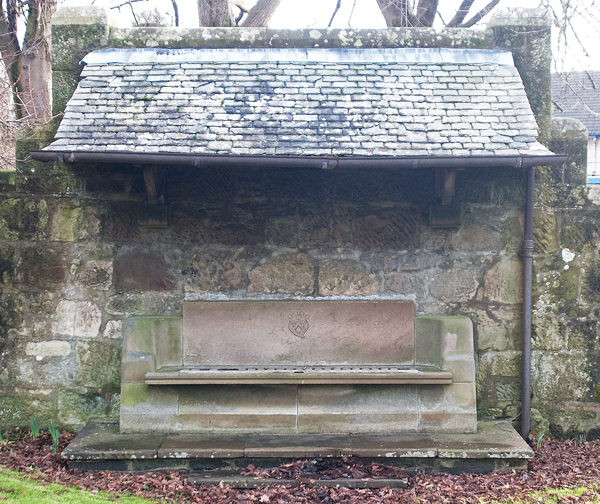 PEOPLE driving through Cardross give it barely a glance, if they notice it at all.

Villagers walk past it many a time without giving it a thought, except when they want to rest weary legs.

It is of course an ornamental stone seat at the corner of Main Street and Station Road, and it was presented to Cardross on the afternoon of Saturday August 27 1932.

Behind the project was the village branch of the Scottish Womens Rural Institute who set up a fund to pay for it, to which many non-members of the branch also contributed.

The ladies were out in force for the presentation ceremony, which was reported in detail by the Helensburgh and Gareloch Times.

Miss Eunice Guthrie Murray of Moore Park, who in her earlier years was both one of Scotland’s foremost activists for women’s rights and the first Scottish woman to stand for parliament, presided at the ceremony.

This was a great day for the members of the local branch of the Institute, she said.

Some months ago the idea had originated, and living as they did amidst beautiful surroundings, they thought that they might give something that would not only be good to look upon, but which would be of use to their fellow citizens.

She called upon the Lord Lieutenant of the County, war hero Sir Iain Colquhoun of Luss, to hand over the gift.

Miss Murray said that they were greatly honoured in having Sir Iain with them, and that his enthusiasm for every good cause connected with his native county, and Scotland generally, was well known.

She added that no-one had done more for the preservation of the beautiful in Scotland than Sir Iain, and to preserve the beautiful was almost as good as to create it.

The audience warmly welcomed him, and he said that it gave him great pleasure to hand over the beautiful seat to Arthur Mitchell, of Helensburgh District Council.

Sir Iain said that he had the greatest admiration for the WRI, both collectively and individually, and it was one of the finest movements ever started in Scotland.

Whenever they wanted anything done in his village of Luss they appealed to the local branch of the Institute, which never failed them.

He congratulated the members upon having conceived the idea and upon their energy in having it carried through to a successful finish.

He said that there were far too few villages in Scotland where a practical interest was taken in preserving and beautifying its features.

“People ought to take a pride in their native village; it has an effect upon the character of the individual,” he said.

“During the Great War, when you asked some men where they came from, they replied with pride when they gave the name of their native town or village. Others replied as if they were ashamed to confess they belonged to such a place.

“I am impressed with the pride the members of the WRI have shown in their village, and if Cardross makes an application for a grant for a playing field to the National Playing Fields Association, I would give it my heartiest support.”

Mr Mitchell expressed his admiration for the spirit of enthusiasm which was always animated and was a characteristic of the Cardross Branch of the WRI.

He said: “In this handsome seat you have the symbol of women’s consideration for the weary, and many passing pilgrims will take advantage of it.”

This gift from the WRI would, he hoped, act as an incentive to others to work for the improvement and beautification of the village of Cardross.

Votes of thanks followed, by Miss Coulson of Edindonnach to Sir Iain and by Commander the Hon A.D.Cochrane, DSO, MP, to Miss Murray.

The Commander said that, although he had not had the pleasure of knowing Miss Murray personally, he had heard nothing but the greatest good of her and of the happy knack she had of doing things and getting them done.

Miss Murray, who in 1945 was awarded the MBE for her public service, did not miss the opportunity to call for the village to have a bowling green, a tennis court, and a children’s playing field. 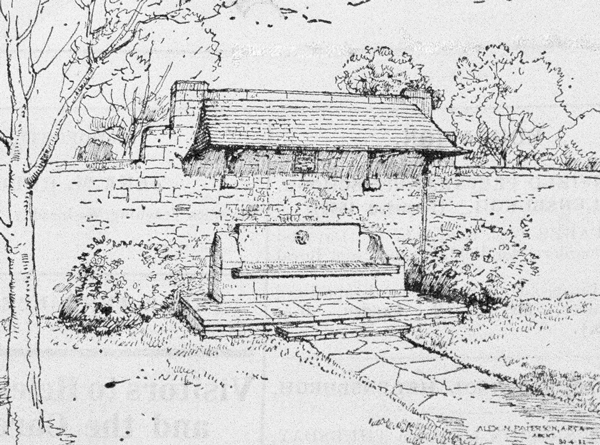 The ornamental seat was designed by well known Helensburgh architect and artist Alexander Nisbet Paterson, who was responsible for Helensburgh’s Clyde Street School, the Hermitage Park War Memorial, and many other local and Glasgow buildings.

Mr Paterson drew the sketch of the seat (left). It was built with light grey freestone from Hewarth Burn Quarry in Northumberland, is nine feet long, and has an oak grating inset on the seat.

It is raised on a stone flagged platform, and the occupants are protected from the rain with a roof of green Elterwater slates projecting from the wall.

On the wall is a stone panel with the inscription: “For the use of their village and intrusted to its care, this seat was erected by the Cardross Branch of the Scottish Women’s Rural Institute, 1932 A.D.”

All the mason and builder work, including the lettering and carving, was carried out by the Helensburgh firms of William Jack & Sons and James Williamson & Son.