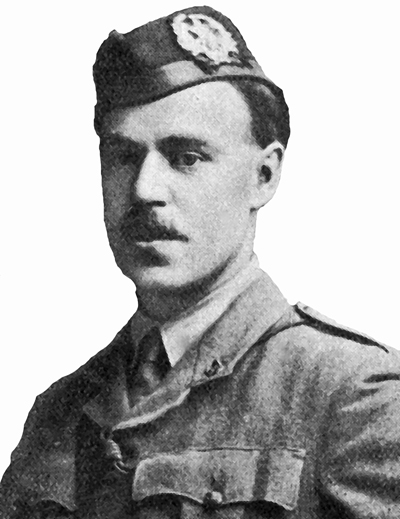 A HELENSBURGH man had a glittering school and university career, died in action in World War One . . . and has the possibly unique distinction of being married after his death.

It was an extraordinary end to a remarkable life for the second son of a clay manufacturer, Campbell Rodger, and his wife Catherine, who lived in Rossland, East Montrose Street.

Mathew Freer Rodger was born at Rossland on November 5 1885.

His early education was at Miss Johnston’s School in the town, then Larchfield Academy, and as a boarder at the prestigious Merchiston Castle School in Edinburgh from 1900-4.

There he became a star pupil — twice winning the Merchiston Essay Prize, becoming a prefect, and eventually school captain. He was in the rugby 1st XV, the gymnastics eight, and the shooting eight.

Next came a scholarship to Corpus Christie College, Cambridge, where he graduated BA in 1907.

The college magazine said: “After a residence of three years he left with a third in Greats, a class which those who knew him felt to represent but poorly an exceptionally clear and able mind, a deep interest in theoretical problems, and a very genuine literary gift.

“In athletics, meanwhile, he had done yeoman service to the college.

“He became successively secretary and captain of the rugby XV, in which his skill and experience at three-quarter were often the mainstay of a combination at times somewhat lacking in these qualities.

“From his unvarying position at bow he helped to raise the college boat well into the first division from the last place but one on the river, and he also rowed in an eight which acquitted itself with conspicuous credit at Henley.

“All the teams and crews of which he was a member derived a peculiar inspiration from his sturdy physical strength, quiet perseverance, and unfailing good humour.”

After leaving Cambridge he studied at Edinburgh University and graduated BA, LLB in 1911.

He served his legal apprenticeship with R R Simpson & Lawson WS (now Shepherd + Wedderburn) and was admitted to the Society of Writers to Her Majesty’s Signet, an Edinburgh-based private society of Scottish solicitors, in December 1911.

In 1914 he was employed with Carmichael and Miller WS (now Aitken Nairn WS), but shortly after the outbreak of World War One he obtained a commission as a 2nd Lieutenant in the 3rd Cameronians (Scottish Rifles) on September 26 1914.

He was promoted to Lieutenant in March 1915 and transferred to 4th Cameronians. Finally he was attached to 2nd Cameronians.

The magazine continued: “His sterling qualities and athletic training fitted him admirably for the trials and hardships of the Front, and fleeting glimpses of him at home on leave always reveal his old cheerful and courageous self.

“We were hoping great things for him, when all at once the end came in a successful attack on a German trench.”

He served continuously in France from May 1915 until his death, killed in action near Le Transloy on October 23 1916, aged 30, in the final offensive mounted by the British Fourth Army during the Battle of the Somme.

He died while leading his company attacking trenches six other battalions had tried and failed to take.

A total of 81 Cameronians lost their lives that day, including Captain E.M.MacHarg, the brother of Andrew S.MacHarg, of Redcote, Henry Bell Street.

Mathew’s brother wrote in a letter to one of Mathew’s friends: “MacHarg his captain, who had also become a great friend, fell with him on the same day.

“Mathew in his last letter to me said, ‘MacHarg is going strong and I am his faithful second.’ So he was, to the death.

“I think his outstanding virtue was his faithfulness, with himself, to his friends, to anyone who had any claim on him whatsoever, to his country, to his God.”

Despite the late stage of the war and an inevitable weariness due to the attrition of so many tragic deaths, the Scots Law Times’ editor was moved enough to comment: “His is one of the many promising lives cut short by this merciless war which has exacted so heavy a toll from the legal profession.”

The Merchistonian Magazine printed a letter from a fellow old boy which stated: “I remember last winter reaching a tent camp at Merbecque in the perishing cold.

“I think Mathew must have seen how perished I was having spent a long time in the East.

“On returning a little later from duty to my tent I was ever so astonished to find Mathew busy with some pioneers he had collected, making my tent more comfortable.

“I have never forgotten the incident or ceased to remember his out of the way kindness.”

He is named on the World War One war memorials in Hermitage Park, Helensburgh, and Merchiston Castle School, but strangely not on the Corpus Christi College memorial.

It was after his death that what the Signet magazine described last August — in a series about Writers to the Signet who died in World War One — as the story of Mrs Rodger and the fatherless child unfolded.

Seven days after Mathew’s death, a baby boy was born on October 30 1916 at 2.50pm in the Royal Maternity Hospital in Edinburgh, to whom the mother gave his father’s name, Mathew Freer Rodger.

The Lieutenant had a girl friend who became his fiancée and the mother of his child, and after his death she petitioned the Court of Session in Edinburgh to be declared his wife.

This is how the Scotsman of Wednesday December 19 1917 reported the case under the headline ‘An Officer’s Marriage’ . . .

Evidence was led in an action in which Helen Esson or Rodger, Dryden Place, Roslin, Midlothian, asked the Court to declare that she was legally married to Matthew Freer Rodger, who was a Writer to the Signet in Edinburgh, and who was killed in action while serving as an officer in the Army.

The pursuer, 26 years of age, said she first met Mr Rodger in January 1910 near her home, which was then in Lindsay Road, Leith.

They met frequently after that, and about Christmas 1910 he began to visit her parents’ house.

They came to be on affectionate terms, and he frequently talked of making her his wife.

From 1911 until war broke out he visited her at 71 McDonald Road, Edinburgh, to which her parents had removed, and he corresponded frequently.

In October 1914 he got a commission in the Army, and went to Nigg.

One Sunday evening while he was on leave they attended church. After coming out, he took the measurement of her ring finger in wax

Next day he put an engagement ring on her finger, saying: “You are all mine, Nell. Be good till I come back.”

She told her parents of her engagement. Mr Rodger left a package in the house, which was opened after his death and found to contain her letters to him.

He went to France in May 1915, and on more than one occasion when on leave spent the night at her parents’ house. He was there on 1st February 1916.

His room had a borrowed light off the kitchen, where the witness slept. She was sitting beside the fire, when he tapped at the window and climbed through.

He drew her on his knee and made love to her. What subsequently took place was on the faith of his engagement to marry her.

He said that she was all his, and she regarded herself as being married.

Mr Rodger sent her an allowance of £3 a month from 1st June until his death, which took place on 23rd October of that year.

She gave birth to a child on 30th October 1916 at the Maternity Unit in Edinburgh, and she registered the child as legitimate.

Deceased qualified as a W.S. shortly before the outbreak of war, and his home was in Helensburgh. The witness received a large number of letters from Mr Rodger.

He spoke in this correspondence of his promise to marry her, and his efforts to get leave from the front in order to do before the child was born.

Lord Anderson said it was a clear case, and granted decree of declarator of marriage.

To the credit of the legal system of the time, Lord Anderson granted a decree of declaratory of marriage.

Following this declaration of marriage, Mrs Rodgers was entitled to the Writer to the Signet widows’ pension — from the WS Dependants’ Annuity Fund — which she enjoyed until her sudden death at a private nursing home in Adelaide, Australia, on 11th April 1930 in her 38th year.

Anyone who had any claim on him whatsoever, to his country, to his God. For those who are faithful unto death there is a promise.

Two months after the Scotsman report, the Singapore-based Straits Times ran a report of the case under the misleading headline ‘Young Widow’s Story of Dead Officer’s Visits’, and described it as a very romantic story.