A WORLD War Two code breaker from Helensburgh has told of ducking from bombs and being chased by geese during her time working in secret underground bunkers at the famous Bletchley Park.

Mrs Betty Balfour, 87, signed up to the Wrens aged 17 and attended the Government Code and Cipher School before being stationed at the Milton Keynes facility — home of the Enigma machine.

Like thousands after the war, Betty slipped back into everyday life, never speaking of her experiences as a code breaker – including a never-heard-before alternative use for the Enigma machine – and her service remained unknown to those closest to her.

“My parents died without ever knowing what I did,” she said. “We never spoke of it — we signed the official Secrets Act and took it very seriously.”

It was her father, Alan Ranken, a Glasgow solicitor, who signed off on her first step towards becoming a code breaker, much to the displeasure of her mother Elizabeth.

Betty was the youngest of three, with twin Helen born just an hour before her, and sister Mary three years her senior.

As Helen was preparing to join Mary at St Andrew’s University, Betty decided that she wanted to have an adventure, and she signed up to the Wrens on a whim.

On October 25, 1944, an ‘innocent’ Betty took the train to London aged 18. She said that the idea of living in a large city did not scare her, instead it felt like life was opening up.

She added: “When the doodlebugs went off we just dropped to the ground and hoped it wasn’t you that was hit.

“I was young and didn’t think anything bad was going to happen, but it did. I lost three cousins and my first boyfriend, Johnnie Mellor, who was a rear gunner. He was shot down and killed.”

After a series of interviews, and a six-week training session at Mill Hill which ‘weeded out the dross’, Betty and her fellow Wrens were taken away to their new accommodation, but they never stayed in one place long.

She said: “We stayed about an hour from Bletchley Park and we moved around all the time between different accommodation so that if one place was bombed we wouldn’t all die.

“We knew we were expendable, but it was what was in our heads that was important.”

It is only 70 years later that the extent of the role of the codebreakers in the Second World War is known, and although they are now hailed as hidden heroes, Betty said the day-to-day work was boring.

During ten-hour shifts in underground hunts, the Enigma machine would produce reams of paper and Betty would sit at one of the long tables and decipher Japanese code.

Betty added: “I still remember the code YOSERO, or Mr Yosero. We got to know the people at the other end of what we were doing.

“I also remember that we had to divide everything into five. It was appalling, boring work, but it was most important.”

She said the Enigma also had another great — less publicised — use. “When the girls were on the nightshift we used to hang our smalls from the Enigma because it was a great way to dry them,” she said.

"It used to be festooned with bras and pants all through our night duty. Back then it must have looked a real sight."

The women faced some challenges on their way to the underground hunts and they used to have to run the gauntlet past hungry geese that lived in the pond outside Bletchley Park.

She said: “One day I had forgotten to put on my shoes and instead I was wearing my pink furry mules, and all the geese made for me. I had to run in my bare feet with the geese snapping at my heels.

“Safe to say I never forgot my shoes again!”

Betty served with the Wrens for four years. After her time at Bletchley, she was transferred to Arbroath and then Reading, but she still never shared her code-breaking past with family or comrades.

It was not until friend and fellow Wren Margaret Ayling visited Bletchley herself some years later that she found out about Betty’s past when she saw a picture of her in an artifact on display.

In turn she posted her a gift of a tea towel to act as a knowing nod to her past.

After the war, Betty worked as a receptionist at a hotel in Scarborough, a sales girl in a Glasgow department store, the civil service, and property journalism. She is twice married and has two sons Callum and Gordon.

The grandmother-of-two moved to Cove in 1983 before settling in Helensburgh in 1986, where she retired following a successfully career as a property sales guru.

Betty has always had a love of animals, and in the 1960s she bred the world’s smallest Chihuahua, Chica — weighing just one ounce. 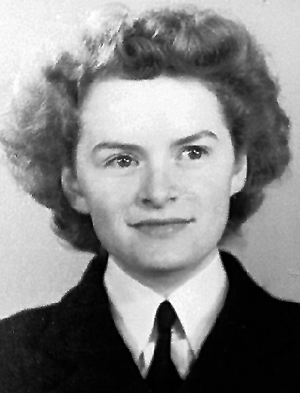 In 1998 she revisited Bletchley Park after she was asked to open the wing of Brook Hospital following the discovery of a portrait of her uncle Harry Ranken, a Victoria Cross recipient, in a hospital cupboard.

Harry was a Medical Officer with the King’s Royal Rifle Corps during the First World War.

During her return visit with son Gordon in September 2014, Betty — who still keeps a crossword book handy — had hoped to meet up with fellow Wrens. However the couple she keeps in contact with were too ill to travel, and Betty said she is one of the few left.

But Betty has always taken on life with a smile, and even in those dark days in the code-breaking huts, she said the girls still had their fun.

“You made the most of the little things, like a lunch break, and to me it was all real life,” she said. “It was obscure, very demanding, and eye straining work, but in the end I supposed it saved the war.”