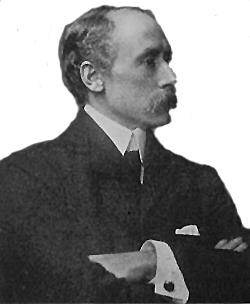 AN EXHIBITION of paintings by one of the Helensburgh and district’s most distinguished artists was held in a Glasgow gallery in August 2014.

Cyril Gerber Fine Art said that this was the first James Kay RSA RSW exhibition to take place in the city, although his works are held by most of the major public collections in Scotland.

The artist lived for many years at Portincaple and is buried at Faslane Cemetery. He had several studios in Glasgow, including four in West Regent Street where the gallery is situated.

“It was therefore fitting that his paintings return to this location,” said gallery director Jill Gerber.

Best known for his paintings of harbours and Clyde scenes, James Kay was born in Lamlash on the Isle of Arran on October 22 1858, but lived for some 33 years in the Loch Longside village in a house called Crimea, now renamed Dalriada.

Before devoting himself entirely to painting, he spent some time working in a Glasgow insurance office, and joined the St Mungo Art Club. He delighted in studying the river Clyde in all its aspects.

He was not one of the famous ‘Glasgow Boys’, although he was friendly with some of them, including James Guthrie, George Henry, and A.E.Walton.

His first picture in the Royal Academy was 'Towed into Harbour on the Clyde', hung in 1889 and then bought by an English collector, and his first in the Paris Salon was in 1894.

From then he had works on display in most of the important exhibitions in Britain, Europe and America every year. 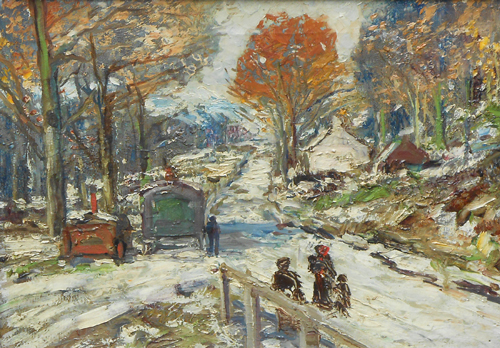 In 1903 his canvas, ‘Toil and Grime’, a picture of shipping at the mouth of the River Kelvin, was awarded the silver medal and diploma of the Société des Amis des Arts at Rouen in France.

The same year his ‘River of the North’, a winter scene in Glasgow’s busy harbour, gained the highest honour a foreign artist can receive at the hands of the Salon jury and of France when it was awarded a gold medal, and was purchased for the Luxembourg collection.

In 1906, he won the gold medal and diploma at the 37th Exposition Municipale des Beaux Arts de Rouen, where his picture ‘Winter’ was purchased for the Rouen Municipal Collection.

The following year his ‘Launch of the Lusitania’ in the Royal Glasgow Institute of the Fine Arts was bought by the Corporation of Glasgow for the municipal collection.

"In his river paintings, he strived to capture the atmosphere of industrialisation, the smoke and grime, rather than romanticizing about the sea,” said the critic Annie C.O’Neill.

“Smoke, steam, water, light and the great silhouetted forms of ships captured this reality in a dramatic way."