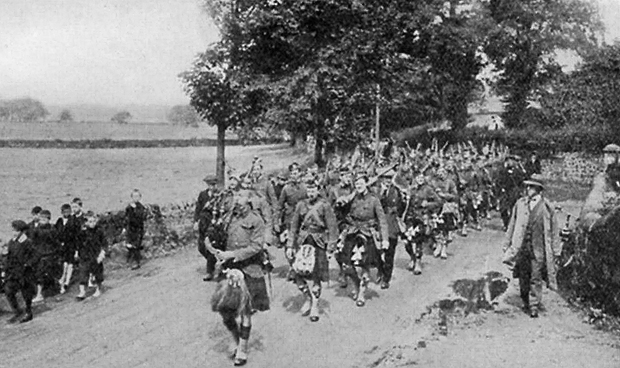 BRITAIN declared war on August 4 1914, and that day the Helensburgh Company of the 9th Argyll and Sutherland Highlanders were on the march.

On Monday August 34 2014 the commemorations of the 100th anniversary of the ‘Great War’ began, and many a local family recalled with pride, and often sorrow, the part relatives played in the conflict.

The war is actually considered to have started on July 28 with Austria-Hungary’s declaration of war with Serbia.

Many countries became embroiled within the first month. Others joined in the ensuing four years, with Honduras announcing hostilities with Germany as late as July 19 1918.

However Romania entered the war — for the second time — one day before it finished on November 10 1918.

In Britain the Daily Mirror reported that the declaration was made after an ‘unsatisfactory reply’ came from Germany to the British ultimatum that Belgium must be kept neutral.

The Mirror headlines were: “Huge crowds cheer their majesties at palace — £100,000,000 voted in Commons in five minutes — German invasion of Belgium with airships”.

The report continued: “Great Britain is in a state of war with Germany.

“It was officially stated at the Foreign Office last night that Great Britain declared war against Germany at 7pm. The British Ambassador in Berlin has been handed his passport.”

The war was supposed to be over by Christmas, but dragged on for four long years of bloody stalemate.

Although the war in the trenches of Europe was the main focus, the conflict soon became a ‘world war’. Japan was allied to the Entente forces and the Ottoman Empire soon joined the Central Powers.

Conflict between the imperial forces of these competing power-blocs in Africa and South America aggravated the situation.

The names of most of the local men who lost their lives are recorded on the Cenotaph in Hermitage Park and several smaller memorials around the district.

The officers and soldiers of the 9th Argylls, many of them from the Helensburgh area, served with distinction in France and Flanders from February 1915 until July 1917, when the nucleus was broken up and sent as reinforcements to the front line.

His distinguished service won the Military Cross and Bar, and two Mentions in Despatches, before the incident for which he won the Victoria Cross on November 4 at the age of 29 — seven days before the Armistice was signed.

The VC citation reads: The citation reads: “For conspicuous bravery and devotion to duty during the forcing of the Sambre-Oise canal at the Lock, two miles from Catillon, on November 4 1918, when in charge of the bridging operations at this crossing.

“Although wounded, Major Findlay continued his task and after two unsuccessful efforts, owing to his men being swept down, he eventually placed the bridge in position across the Lock, and was the first man across, subsequently remaining at this post of danger till further work was completed.”

Another VC was won at Istabulat, Mesopotamia, on April 22 1917 by a Cardross man, Eton-educated Lieutenant (later Lieutenant Colonel) Graham, who served with the 9th Argylls.

While in charge of a machine gun section, he came under heavy fire and was seriously wounded several times. He insisted on carrying the ammunition and continuing to fire at the enemy, and was awarded the VC by King George V later that year.

He began his military career as an officer in the Argylls, but then became a pilot candidate. He joined the Royal Flying Corps in December 1915 and was assigned to 27 Squadron.

On May 26 1917 he received the Military Cross for his prowess as a bombing formation leader.

The citation reads: “For conspicuous gallantry and devotion to duty in carrying out long-distance bomb raids. On one occasion, although his engine began to fail, he continued to lead his formation, and succeeded in bringing back most valuable information.”

The next month he was awarded a first bar to his MC, and the citation noted that he never hesitated to attack an enemy on sight. It continued: “His consistent dash and great fearlessness have been worthy of the highest praise.”

The citation reads: “He is a most inspiring patrol leader who has destroyed 23 enemy aircraft, and shot down eight others out of control.”

On August 3 1918, he was awarded the DSO. On September 16, he was gazetted for his second bar to his MC. The citation reads: “For conspicuous gallantry and devotion to duty in his leadership of offensive patrols.”