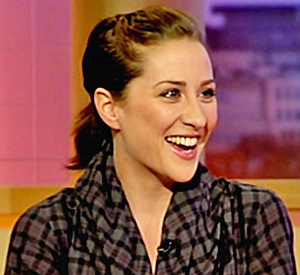 HELENSBURGH-BORN Morven Christie was back in Glasgow for the 2014 Commonwealth Games.

She starred in the opening event for ‘The Tin Forest Festival’ for the National Theatre of Scotland in the South Rotunda courtyard.

The show included poems, songs, speeches and jokes inspired by the 'Dear Green place' when Morven joined Gary Lewis, Paul Riley and Barbara Rafferty to bring to life the words of Billy Connolly, Alasdair Gray and Jimmy Reid, and highlight extracts from newspapers and journals stretching back to the 1850s.

Morven said: "When I first read the script, I was blown away by it, and I think it offered a totally unique perspective on everything which makes Glasgow the place it is.

"I know that lots of people were excited by the Commonwealth Games, and this is exactly the sort of event which put the city in the spotlight and reminded people how many great things have emerged from it.

"It was a celebration, something really life-affirming, and yes, parts of it were sentimental — but that's what you would expect from what is a love letter to Glasgow. Hopefully, we put people in the right mood."

The very versatile actress, who lives in London, has been busy recently filming the six-part ITV series ‘Grantchester’ with a cast which also includes James Norton, Robson Green, Tessa Peake-Jones and Kacey Ainsworth.

"We've been shooting for the last four months and the first trailer was on just before the kick-off of the World Cup, so this is an exciting time," said Morven.

"It features James as a parish priest, who starts investigating after one of his parishioners dies in mysterious circumstances. It is very distinctive, beautifully filmed, and there has been a lot of love poured into it. I am confident it will appeal to those who like Downton Abbey.”