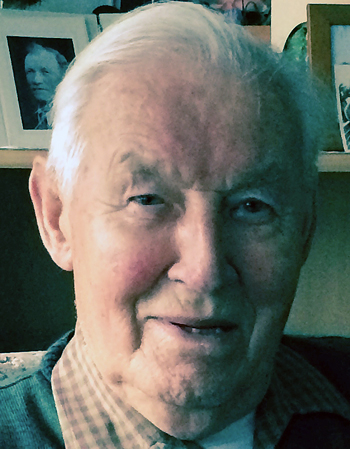 A German prisoner of war who was imprisoned at the POW Camp at Stuckenduff, Shandon, from 1946-7 wrote this account specially for Helensburgh Heritage Trust in January 2014.

I will begin in December 1943 in Thorn, West Prussia, when my military training ended.

The cold weather in Thorn left me with diphtheria and scarlet fever. Thus I did not go to Russia in January 1944, as my comrades in the company had, and where the first of them had already fallen. Already then my guardian angel had saved me from Russia. Until my illness passed, it was March 1944.

After subsequent sick leave of one month I was transferred to Baumholder, where the new Rommel division was being formed. I was assigned to an SMG group (Schweres Maschinengewehr, or heavy machine gun) as a “Schütze 4”, who had to carry the ammunition boxes.

First, our unit moved to St. Nazaire. It was thought at first that the Allies would land there. Presumably, information got out that this would not happen: our unit was moved into Normandy with our Panjekärchen (carts with two wheels on which the big gun was loaded).

In about mid-May, we had dug ourselves in with tents on the heights. In the following weeks, with the French, we set up so-called "Rommel asparagus" in the swamp. These are about 4-meter-long logs that are buried in the earth and then connected with barbed wire.

On D-Day at about 2.00 o´clock, I was standing guard and saw the Allied planes drop so-called Christmas trees, which were beautiful to look at. That was roughly in the area of ​​Carentan. In the morning I got myself a liter of milk in the village. The French said to me: "Get out, the Allies have landed."

Our unit was then moved toward Carentan, where the parachute troops had landed. At our first stop, we saw then the first gliders and parachutes in confined pastures. We hadn’t had food or water for about two days.

Looking for chocolate or anything edible in the pastures, which are separated in Normandy by thorn hedges and ditches, I saw something white that moved. I went to it and saw that a black-faced paratrooper had put a white sock on his gun. I cocked my gun and walked toward him. He was trembling with fright all over.

Since I did not speak English at the time, I said to him: "Ich tue dir nichts (I won’t harm you)." Because of my calm tone, he realized that nothing would happen to him. Finally, he offered me his canteen with the words: "Good Water”.

For safety reasons, I let him drink first and then drank too--after days of no water. Before, I had taken his sharp parachuting knife that he wore on his legs. He was then transported to the prisoner holding area.

The following day we were assigned to search for hidden paratroopers. With me was a Saxon comrade. There I also discovered my first corpse - a white American paratrooper. He sat on an embankment, eyes open, I looked at him but saw no wound or injury.

My colleague searched him, and took a leather case that contained an image with a blond woman from New York. I said to him, "leave that with him". He said to me: " I like it."

A few days before American troops had already landed with ground forces such as tanks. We were supposed to cover the withdrawal of the company with our SMG group (an officer and us 4 men).

A tank stood in front of the entrance to the pasture. The accompanying soldiers came into the paddock and shouted: "Komm an Boy, Händs up". 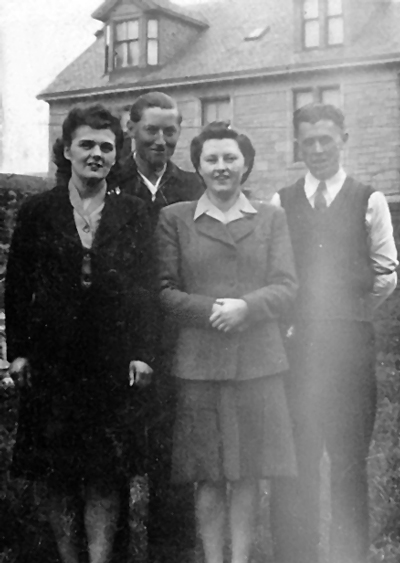 We came to the prisoners’ center and were searched. They discovered the American’s case with my Saxon comrade. I said to him: "You should have left that with the dead man."

A guard struck him in the behind with the butt of his rifle. I said to him, "See, that’s what you get. If they had found the ring with you, they would have killed you right then and there. We marched to the flat coast and were transported to an English ship on landing craft. That evening I ate my first meal in three days.

During the fighting I probably had a good guardian angel; merely a piece of shrapnel had torn a hole in my uniform. By boat we went to England and then by train to Scotland.

After about two weeks in a camp with Nissen huts we were loaded on a ship (the "Queen Mary One"). She was a troop carrier and took 2,000 German prisoners of war to America. Because of the submarine threat they made the voyage known before hand, so that the submarines would not attack.

After about 5 days we reached New York, and were taken from there to Camp “Patrick Henry” in West Virginia by Pullman car. In the camp soldiers of the “Africa Corps” greeted us. In the camp canteen I drank my first Coca Cola.

In the American military kitchens, the prisoners served the Americans their food. We received the same catering as the soldiers. Once a month we were allowed to write a letter to the German family. The German authorities blacked out the fact that we got chocolate, which I could later see in Germany.

In May 1946, America released all prisoners of war. It was said: "You’re all going home." In truth, we went to Scotland for the road building.

First, we refused to work, but that did not change anything. It wasn’t Scotland’s fault or anything. Politics had just decided it. We took the train every morning in the direction of Inverness, past Loch Lomond. But I never saw Nessie.

As of January 1946, we were able to move quite freely. We could go into the town of Helensburgh (about five miles from our camp). We could also use the double-decker bus. For this we needed but real money.

So I went after work from about 5pm in the city and did gardening work. In February it was snowing in Scotland despite the Gulf Stream, so much that the train could not drive and we had to stay at the camp — so we had plenty of time.

The Scots are known to like playing football. Therefore, the football coach came to the camp and asked us if we could clear the football field from the snow for the weekend, so 20 of us did. Finally, I grabbed the broom and cleared the remaining snow in front of goal. 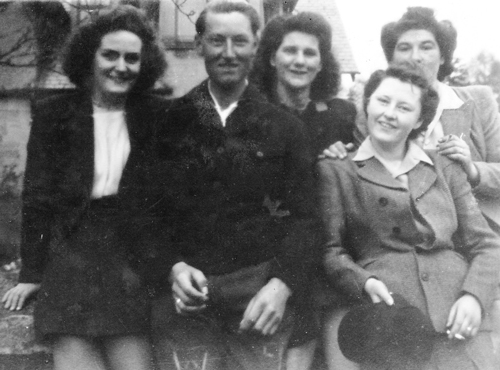 This must have pleased the coach, Jack Shields, because he invited a colleague and me to come to his house for lunch on a Sunday.

Now you have to know that meat in Scotland at the time was still rationed and they had to share the meat with us.

I became very friendly with Jack's daughter, May, and I remember attending an afternoon dance event when the guys sat on one side and the girls on the other. She invited me to a concert or a walk, although I had PW written on my trousers.

May and I had the same birthday, April 4, and she was two years younger than me. She had a brother, Dennis.

On one occasion we went motor boating across the Clyde, drinking Sailor Beer.

Through this friendship, I was invited every Sunday and they told me that my home was annexed by Poland; I should stay in Scotland and work in agriculture.

I told them I first wanted to return Germany and find my family, from who I had no sign of life. So in October 1947, I came to Hamburg and at first lived with my uncle in Hamburg-Altona. From there I traveled to the Rhineland to my brother.

Here ends my report of captivity. Until then, my guardian angel had always saved me from harm and for this I am thankful.

■ Paul, who was 88 when he wrote the article, lives in the town of Königswinter, a city and summer resort on the right bank of the Rhine in the Rhein-Sieg district, in North Rhine-Westphalia. He served in the German Border Police from 1948-58 when he joined the German diplomatic service in which he served until his retirement in 1990. This article was translated from German by his friend, Dr Andrew B.Denison.