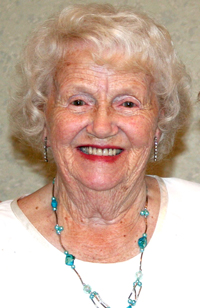 THE loss on Wednesday May 28 of one of Helensburgh's best known women is being felt right across the West of Scotland.

Jean Petrie will be remembered by everyone who met her, and there were thousands, as a gentlewoman of great grace and dignity, and by her family as “a five star mum”.

Jean was the devoted wife and constant support of Billy Petrie, former Provost of Argyll and Bute Council and Freeman of Argyll and Bute who gave 45 years of his life to public service on local authorities ranging from the old Dunbartonshire County Council to Strathclyde Region and on a host of other bodies throughout Scotland. He is one of the two honorary members of Helensburgh Heritage Trust.

Born in Auchinleck in Ayrshire, Jean came to Helensburgh as a two week-old baby and grew up in the town with her parents and her younger brother John.

As a young girl attending Hermitage Primary School she found herself sitting near a lad called Billy and the two became friends unaware that they were destined to spend their lives together.

Jean was a keen swimmer and was involved in the town swimming club as well as in many church and youth organisations, and when she graduated from the Commercial College in Glasgow her first job was as secretary at Helensburgh Police Office which was then in Sinclair Street.

One of Jean's great joys was the adventure of travel, and she travelled extensively throughout her life. But her first venture into international travel was when she moved to New York, crossing the Atlantic on board the Queen Mary, to work for the Paisley company J & P Coats, and she spent 18 months in the Big Apple before coming home to Helensburgh.

A job with a Glasgow solicitors meant a daily commute to the city, a journey she often made in the company of her old school friend Billy, who was, by that time, back from National Service in the RAF and working for the National Coal Board.

The friendship developed over time and the couple were married in St Columba Church almost 59 years ago. Because Jean lived at that time in a flat above the Sun restaurant, a red carpet was stretched across Sinclair Street and the traffic stopped to allow her to walk to the church where her groom was waiting.

The newly weds took their honeymoon in Barcelona.

Jean was a devoted mum to Elizabeth, Billy and Barbara, and rejoiced in becoming a grandmother in time to Alan, Sheryl, April, Lynsey, Nicola and Fraser, and then great-grandmother to Lewis.

Jean threw herself with huge enthusiasm and energy into Billy's public life and was always at his side providing her own brand of gentle grace to every event she attended. She will be remembered by thousands for her gift of words, always knowing the right thing to say whatever the occasion.

Happy to remain, however, in the background, Jean was not one for making speeches, but she was all in favour of taking action where she felt it was needed, and it was Jean who was the power behind the establishment of senior citizens lunch clubs in Helensburgh, Rhu, Garelochhead, Rosneath and Cove and Kilcreggan.

She canvassed tirelessly for Billy in every election and was also closely involved in a group that provided holidays in Spain for elderly people.

She was the inspiration behind the establishment of the now famous New Year Swim at Rhu Marina and attended herself every year to lend a hand. The Swim has now raised well over £11,000 for the RNLI as well as many thousands more for other charities supported by the swimmers.

Jean enjoyed many special occasions at Billy's side including being a guest on the Royal Yacht Britannia when the ship visited the Gareloch.

She considered it a great privilege to have met Her Majesty the Queen and many other members of the Royal Family and attended a number of Royal Garden Parties at the Palace of Holyrood House in Edinburgh.

Her happiest memories of such events were a visit to Buckingham Palace as an invited guest and as a guest at the Mass when Pope Benedict visited Glasgow.

In her later years she was losing her sight, but kept up with the local news as a recipient of Headline Helensburgh, the talking newspaper serving the blind and otherwise visually handicapped in Helensburgh and District.

Jean will always be remembered for her unassuming personality, her warm and gentle nature and her wonderful smile, and she will be missed by more people than she herself would ever have believed.