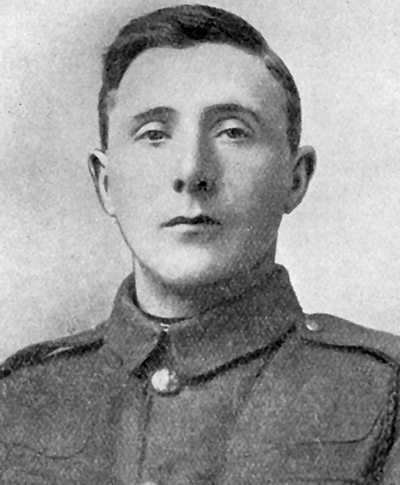 THE YEAR of 2014 marks the centenary of the start of World War One, and many men from Helensburgh and district lost their lives in the extraordinary conflict.

One is particularly remembered in the annals of the local regiment, the Argyll and Sutherland Highlanders, as he was the first man in the 1/9th Battalion to die in Flanders during the Great War.

Lance-Sergeant George McKinlay Mackay was born at his family home, 37 Sinclair Street, Helensburgh, on October 9 1890, one of six children of whom five were sons.

His parents were journeyman plasterer George Mackay and his wife Jeanie, nee Logan.

He died on March 20 1915 at the age of 24, some hours after he was shot by a sniper while returning on the road back from the front line trenches in Dickebusch in Ypres, Belgium.

An upholsterer to trade and an enthusiastic Territorial, George was serving in A Company, which was the Helensburgh company.

His brothers Hugh and James were serving with the Royal Engineers, and Duncan with the 2/9th Battalion at Dumbarton.

The eldest brother, William, would have gone to the war too, but the nature of his employment prevented him, and he was drilling with the Citizen Force.

George wrote letters to his sister which show that he was very fond of her, and he was missing his family, who by this time lived at 82 West Clyde Street.

The first news of his death reached the Helensburgh and Gareloch Times in a letter home from Walter M.Bryden, son of the paper’s proprietor and editor.

He wrote that George was shot through the stomach the previous night coming up from a trench. Two others were wounded.

He wrote: “It is with the profoundest sorrow that I write to acquaint you of the death of your son, Lance-Sergeant George Mackay, who died from wounds received in leaving the trenches about 11am on March 20.

“We had done our spell in the trenches, and had been relieved about 9.45pm on the night of the 19th, and your son was shot in the right side when about 300 yards away from our trench.

“We were passing a ruined house called Sniper’s Barn when he was hit, and fell within two yards of me. Fortunately we were near a dressing station, and in little more than a quarter of an hour he was having his wound attended to.

“From the dressing station we had him conveyed to hospital, where on the following morning he painlessly passed through life to death.

“It will be a great satisfaction to you to know that he received a soldier’s burial, and was carried to his rest with his country’s flag wrapped around him.

“His grave is in the military churchyard here, and a cross will shortly be erected to his memory. Meanwhile, let me assure you of my deepest sympathy with you and yours in deep sorrow; in his death I feel a sense of deep personal loss.

“He will not readily be forgotten in the company of which he formed so bright and cheerful a member. He is the first of our battalion to lay down his life for his country.”

In a letter to his own family, Second Lieutenant Warr stated: “Lance-Sergeant Mackay was in my platoon, and was shot within five feet of me. Poor chap!

“We buried him in the sweet little military churchyard here yesterday afternoon. There was a large attendance, and the pipes led the way to the grave playing our beautiful Lord Lovat’s Lament.

“Being his platoon officer I took a cord, the Colonel taking the head. And we laid him to rest within sound of the guns with his country’s flag wrapped around him.

“At the close of the simple and touching service the pipers stood, one at the head and the other at the foot of the open grave, and played Lochaber No More while we all stood at attention.

“Then, led by the Colonel, we all saluted the dead, and went away in silence.

“No words could describe the haunting pathos and beauty of the wail of the pipes far away from our hills in this foreign land.

“But it is a good place for the poor fellow to sleep in — he lies in the shadow of the great church, its towers shattered and ruined with shell fire.

“One day, when the war is over, this little God’s-acre where so many heroes rest will be fair and beautiful, and I will consider it a duty to re-visit it.”

In a very sympathetic letter to George’s father, Colonel James Clark paid a warm tribute to the young soldier.

“He was a good soldier, who did his duty, and who will be greatly missed,” he wrote.

“He passed away quite peacefully, and I had the melancholy privilege of laying his head in the grave. Remember in your sorrow, which must be bitter, that it was an honour to have such a son.”

George was buried in what is now the Dickebusch New Military Cemetery south west of Ypres, and a little holly bush was planted at the head of the grave by his comrades.

He was well liked by his fellow soldiers, as a tribute written by Private Lachlan McDiarmid from Alexandria shows:

“It’s hard to lose a comrade, one you know, so kind and true,
Willing to help — a better pal, in fact, there are few —
He was doing his duty, along with the rest,
Marching to the trenches, German hordes to test,
Hit by a bullet, our gallant Sergeant fell.
“His comrades gathered around him as he lay upon the ground,
They did the best they could, but he uttered not a sound,
Along the road they carried him, their hearts were sore that night,
For they had lost a comrade, who with them no more would fight,
In a little spot in Belgium, he lies buried with the brave.
“Always will he be remembered among the rank and file,
He did his duty nobly with the gallant 9th Argyll;
And when we come marching back again, Bonnie Scotland dear to see,
We'll remember our young Sergeant, wherever he may be;
Then we'll tell you of his kindness, and his cheery smile,
And of how a brave young Sergeant fell with the 9th Argyll.”