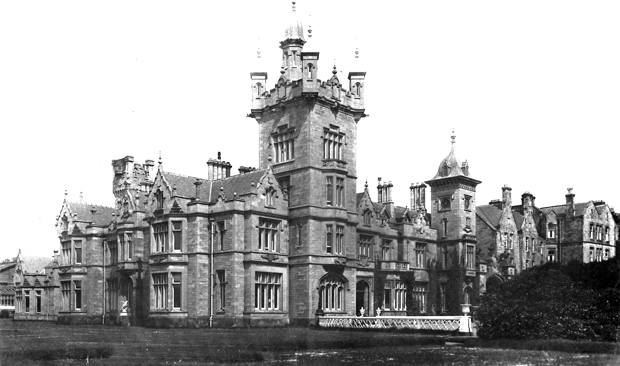 WEST SHANDON HOUSE, the home of the father of Clyde shipbuilding, Robert Napier, was Helensburgh and district’s biggest and best mansion.

The imposing structure was built over a period of years in the mid-19th century, and in its later years became Shandon Hydro.

It dominated that part of Garelochside until it was demolished in 1957.

Born in Dumbarton in 1791, the successful shipbuilder and engineer bought a large area of ground at Shandon in 1833, on which he built a small house where he lived during the summer months.

By then he had many pictures and other works of art which really called for a gallery, and eventually the first house disappeared, to be replaced by the mansion designed by architect John Thomas Rochead, who designed the monument to William Wallace at Bridge of Allan.

The building of West Shandon House extended over many years, but the great tower was erected in 1852. Napier lived there until his death in 1876, surrounded by his large collection of paintings, curios and objets d’art he had acquired from all over the world.

Fine white sandstone was brought from Bishopbriggs using the Forth and Clyde Canal, and the woodwork, after various differences with contracting joiners, was completed by men from Govan shipbuilding yard.

In designing and building the house, special attention was paid to producing a structure that would require few repairs, and no expensive was spared.

In his 1904 book ‘Life of Robert Napier of West Shandon House’, James Napier wrote: “The most attractive part of the house was the museum and picture-gallery, where was to be found one of the finest amateur collections in Scotland.”

This included many typical examples of the early Italian, Dutch, and Flemish masters.

Raffaelle was represented by a Holy Trinity, which once formed part of the collection of David, the eminent French painter; Titian, by a portrait of his daughter; Guido, by a Magdalen from Lord Chesterfield’s collection; Paul Veronese, Tintoretto, and Da Vinci, by Scripture subjects.

Italian landscape art included works of Pannini, Salvator Rosa, and other well-known artists. There were numerous examples from Rembrandt, Rubens, and Van Dyck, and some of the masterpieces of Dutch painters.

The school of British art was represented by Reynolds, Wilkie, Raeburn, and contemporary artists.

In the museum and throughout the mansion were pieces of fine furniture, Dresden, Vienna and other European porcelain, miniatures, snuff-boxes, clocks, watches, old locks and keys, metal-work, guns, swords, armour, and numerous sculptures.

Special attention was always directed to a statue of a veiled lady executed by Thorwaldsen.

There were extensive greenhouses, and the grounds were laid out with great artistic taste.

The winter climate on the Gareloch permitted the growth of various foreign trees and shrubs too tender to succeed elsewhere, and conifers and rhododendrons abounded. 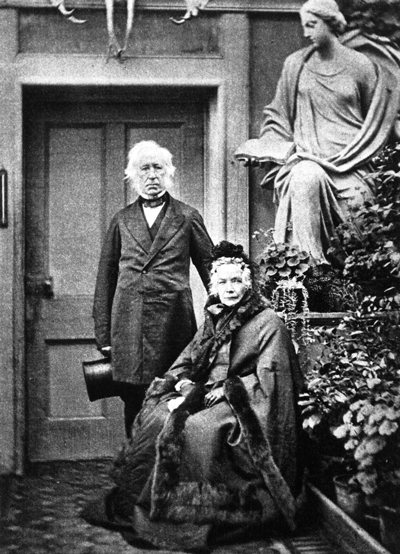 Mr Napier’s hospitality was boundless. He extended a warm welcome not only to private individuals but also to public bodies, and he took a prominent part in entertaining the British Association when they visited Glasgow in 1855.

Locally he played his part, taking a great interest in the church at Rhu, which he attended regularly, and he was on very friendly terms with the Duke of Argyll and his family.

He was a patron of Helensburgh and Gareloch Horticultural Society, and paid for the impressive monument above his friend Henry Bell’s grave in Rhu Churchyard.

After his death the sale of his art collection by auction at Christies in London lasted 20 days and realised nearly £50,000. The mansion was sold for £37,500, but was resold in 1877 for £40,000 to a company which converted it into a hydropathic hotel which opened in 1880. They added a swimming pool and Turkish Baths.

It was in the Gareloch that, in 1917, the ill-fated submarine K13 dived and failed to re-surface, an incident which resulted in two rows of tombstones in Faslane Cemetery.

The following year the house and grounds became part of a submarine experimental base.

The mansion and its grounds were requisitioned in the summer of 1918 by a group called the Clyde Anti-Submarine Committee, which co-ordinated and developed the anti-submarine research in its area. Shandon was chosen because of the sheltered waters of the Gareloch.

The Clyde Committee was soon joined at Shandon by the scientists of the Lancashire Anti-Submarine Committee as the Mersey contained too much silt for its studies.

At the end of the war the Government decided to reorganise and consolidate this research, the two civilian groups were disbanded, and Shandon was chosen for the location of the new Admiralty Experimental Station.

This opened in February 1919, with staff and equipment being transferred there from other establishments which then closed.

However, AES Shandon did not last very long. There was growing Government concern about its running costs and it too was closed in January 1921, with the hydrophone and asdic development transferred to a new Admiralty research laboratory at Teddington and to the Royal Navy experimental establishment at Portland.

After 1921 the building was again used as a hotel and hydropathic establishment, but again during the 1939-45 War the house and grounds were taken over for military and naval purposes.

When the war was over it reverted to being a luxury hotel with two indoor salt water swimming baths, the only covered tennis courts in Scotland at that time, its own fishing pond, rambling and riding in the hotel’s 82 acres of wooded country, and yachting and sailing from a private jetty.

A later development was to convert the building into luxury flats, with common dining and recreation rooms.

But that was to be the last chapter in its history. On July 18 1956 the building was put up for auction in London. A few months later the demolition squad moved in.

The building, with its copper-domed turrets giving it something of the look of a Sultan’s palace, dominated the loch. Today only a few hundred yards of wall mark the spot.