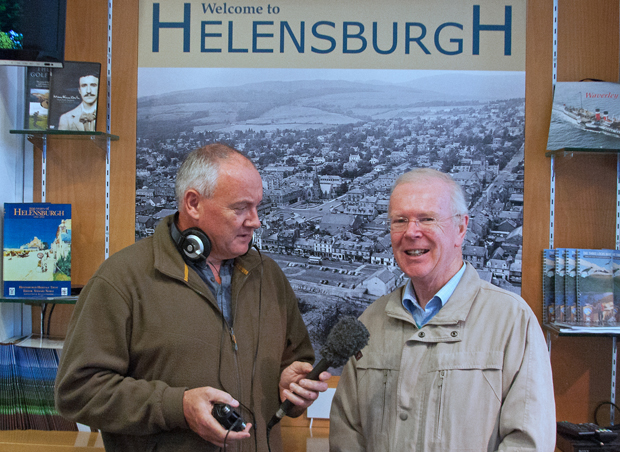 HELENSBURGH Heritage Trust chairman Stewart Noble was interviewed on Monday October 7 2013 for the BBC Scotland radio programme 'Out of Doors', which was broadcast on Saturday October 19.

Stewart was at the Tourist Information Centre at the foot of Sinclair Street to meet broadcaster Mark Stephen and take him on a town centre walk to point out some of the burgh's historical and other features.

"Quite a lot of the interviewing was conducted as we were walking, and the first interview was held on the slipway beside the tourist information office — he actually wanted the noise of the waves against the sea wall!" Stewart said afterwards.

"The interview when broadcast will last for about six minutes, about a quarter of what he actually recorded, and it is difficult to know just which bits he will edit out.

"I spoke about the the beginnings of the town, and how it expanded in three stages; competition between the Clyde steamers, and steamer racing; Henry Bell and the Comet; Rowland's pharmacy; St Andrew's Kirk — the porch, interior, the Bonar Law window, and the John Logie Baird window; the Municipal Buildings with the stone cat and the stone handcuffs; and the former Conservative and Unionist Association building in Sinclair Street."

Mark is Radio Scotland's most prolific features presenter. He presents the highly popular weekly outdoor magazine programme, the equally popular but slightly less anarchic history series Past Lives 16 weeks out of the year, and the one-on one conversation series Turning Points 26 weeks a year. Last year he also presented programmes about the global economic importance of the bicycle in Namibia, China and Denmark.

Mark did Journeys of Faith to Ethiopia, India and Japan, and he also did a whole series of programmes from Malawi. He has done short series on diving, National Service, William Wallace, Bonnie Prince Charlie and poisonous snails.

Mark and his wife Jean live on a smallholding in rural Aberdeenshire, from where he drove to Helensburgh. They have two daughters, Rebecca and Jessica, three horses, three cats and a labrador-ish mongrel Abby. His ambition is to go to Antartica and/or own a Tiger Moth biplane.

The Helensburgh material can be heard on the BBC iPlayer or on the BBC Radio Scotland website until Sunday October 27. Both websites lead to http://www.bbc.co.uk/programmes/b03dvjxl

The programme started at 0630 and the interview with Stewart was broadcast at around 0740. A podcast of the programme is also available from the same websites.