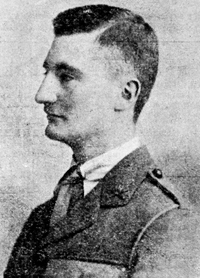 HELENSBURGH Heritage Trust is backing a campaign to ensure that a World War One hero from Cardross is not left out of official commemorations.

The government is to create memorials to Victoria Cross winners as part of next year's events to mark the centenary of the conflict. But Lieutenant Reginald Noble Graham, who served with the Argyll and Sutherland Highlanders, may be omitted as he was born in India.

The Trust believes that Lt Graham's heroism should be celebrated. He won the VC for bravery while serving in the 9th Battalion of the Argylls at Istabulat, Mesopotamia, on April 22 1917.

While in charge of a machine gun section, he came under heavy fire and was seriously wounded several times. He insisted, however, on carrying the ammunition and continuing to fire upon the enemy, and was awarded the VC by King George V later that year.

The Department for Communities and Local Government recently announced plans to commemorate UK-born World War One VC winners with special commemorative paving stones, as part of the 2014 centenary, but Trust chairman Stewart Noble said that it would be unfair to exclude Lt Graham on the grounds that he was born in India.

"The Helensburgh area is proud of Reginald Noble Graham, and accounts of the hero's welcome on his return to Cardross make quite clear how strong his local links were back in 1918," said Mr Noble. "That he might not be commemorated next year, simply because he was born in India, is totally unacceptable.

"Young people need to know our history, and commemorating the bravery of Lt Graham would be a powerful way to make the Great War more relevant to them today. The government should close this loophole so we can commemorate him next year."

Trust website editor Donald Fullarton added: "Because of Britain's links with India at that time, a lot of British children were born in India, and it is ridiculous not to treat them in the same way as those born on British soil. For example, Cliff Richard was born in India, yet he is a British icon."

The Department for Communities and Local Government has said that no VC winners will be forgotten, and further plans will be set out soon.