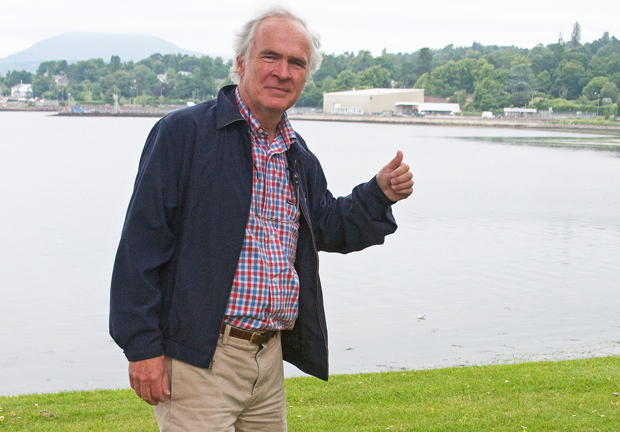 THE DAY four Heinkel aircraft flew over Rhu and landed in the Gareloch during World War Two is still remembered by a number of villagers.

One of the men who was dispatched to RAF Helensburgh to work on the aircraft was Norwegian Hans Strandrud, and in July 2013 his son, also Hans, came to see where his late father worked at the Marine Aircraft Experimental Establishment at Rhu Hangars.

The Heinkel 115s arrived following the fall of Norway to form a special squadron of ‘Helensburgh Heinkels’ commanded by Commander Bugge.

The Norwegian pilots managed to get some German airmen drunk in a pub, and were able to steal the keys of the flying boats from them, then fly them to Scotland.

The aircraft were appraised and tested by the MAEE boffins, so they could be used for special operations.

There were problems servicing and beaching the Heinkel floatplanes because of lack of beaching equipment, knowledge and spares.

Hans Snr, who was born on November 3 1903, trained as an engineer and flight mechanic, and took part in expeditions to Antarctica in 1936/7 and Spitsbergen Island in 1938. A summit in Antartica is named Strandrud Mountain after him.

He was posted to Helensburgh on July 27 1940 to work on these aircraft before they left in November of that year.

Hans Jnr, a lawyer in private practice in the Norwegian town of Lysaker, near Oslo, said: “My father was at sea as an electrical engineer on the Christian Salveson-owned whaling production vessel SS Sourabaya when Norway was invaded, so his ship berthed in England at Milford Haven.

“He reported to the Norwegian Embassy, and became a Petty Officer in the Norwegian Naval Air Force on July 12 1940. They sent him to Scotland as he was an aircraft fitter and engineer and had experience of foreign aircraft such as the Heinkels.

“He went up to RAF Helensburgh with documents amended from alien to Norwegian Air Force, and reported for duty with MAEE after being cleared by the local police.”

He was billeted in Oakfield, a guest house at the corner of Henry Bell Street and East Clyde Street, now the Maybury B & B. The Norwegian pilots stayed at Kinnear House in Charlotte Street, then a small private hotel.

Robin Bird, author of two books about MAEE, said: “The Norwegian Squadron based at Helensburgh was made up of captured He 115s and the four Norwegian 115s which flew from Stavanger when Norway surrendered in June 1940.

“They landed in the Orkneys where a white cross was painted over the swastikas, and then flew on to the Gareloch.

“They intended to perform leaflet drops over Norwegian cities in the wake of the defeat, and did that. However British Intelligence then realised the potential of the Heinkel squadron as ‘spy planes’.

“Two Heinkel He 115 floatplanes were modified by MAEE and Scottish Aviation in Dumbarton to fly agents into Europe, and were then flown to Calshot, Hampshire.

“When returning during the early hours a lone He 115 was met by a Hampden bomber. However, they were mistaken as German by Polish Spitfire pilots, who later claimed that they were not informed of the Heinkel’s true identity.

“The Heinkel was hit and forced to land within sight of Calshot. The pilot put out the fire and the Spitfires called off the attack. 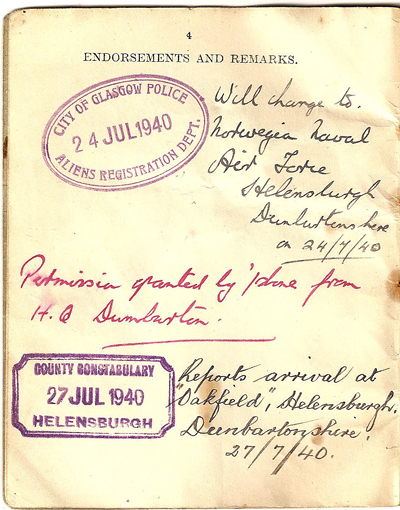 “The repaired Heinkel was then flown to RAF Stranraer before resuming secret flights taking agents into Europe. The Polish pilots were reprimanded for not finishing off the Heinkel.

“At first three of the Norwegian Heinkels were based at MAEE Helensburgh, and were given new serial numbers starting BV. They were later joined by the captured aircraft.”

Hans remained at Helensburgh until the Heinkels left at the end of 1940, and he was posted to Canada for training with Northrop bomber floatplanes. Then he went with the Norwegian 330 Squadron to Iceland and was there for two years.

After the war he returned to Norway in July 1945, and left the Royal Norwegian Air Force having risen to the rank of Lieutenant. The following year he joined Scandinavian Airways as a Flight Engineer, and he retired in 1963 at the age of 60. He passed away in 1971.

Hans Jnr said as he looked out over the Gareloch from Kidston Park: “My wife Kari and I have been in Egglescliffe, a village in County Durham, with my stepdaughter for a family christening, and we decided to come north to visit Helensburgh. I had always wanted to come here, and sometime I hope to go to Iceland too.

“I am very interested in what my father did in the war, and it is good to see where he worked. It is also interesting that Rhu Hangars still exists, although it is now a Media Centre.” 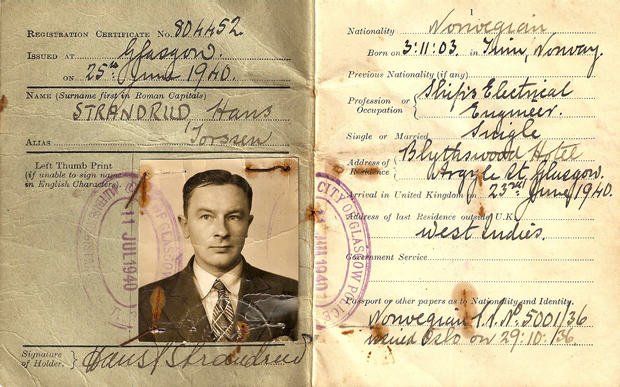