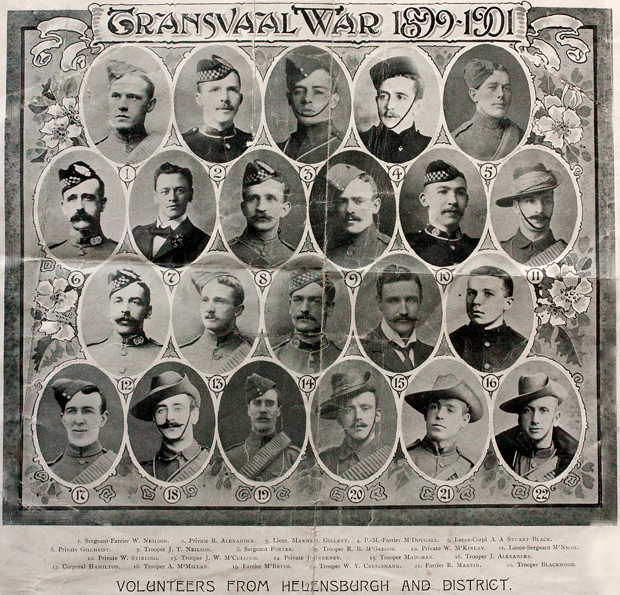 So when the Volunteers, Yeomanry and sharpshooters came back from the war they were given a reception in the Victoria Hall in June 1901 by the Provost, Colonel William Anderson, and the Magistrates.

The Provost said that a carriage clock would be sent to each of them. In fact they were presented personally at a ceremony in the Municipal Buildings in November of that year.

One of the clocks — the one presented to Private William McKinley — was bought in May 2013 by Helensburgh Heritage Trust, assisted by an anonymous benefactor, for £5,000.

It will be displayed in the Heritage Centre at Helensburgh Library in West King Street when a suitable display case is found.

When the Trust appealed for a picture of Private McKinlay, a donor came forward with images of all twenty two.

They were published in a supplement to the Helensburgh and Gareloch Times weekly newspaper on July 3 1901, and a copy was donated by Mrs Mairi Gallagher of Rhu, whose great grandmother’s brother, John Westwood McCulloch, was another recipient.

Sadly, Trooper McCulloch died at home in 1906 at the age of 30, having never married. Mairi said: “The family story is that he was traumatised by the war and was never quite the same when he came home.”

She still has the clock, and while it is in working order it is not in as good condition or as valuable as the McKinlay clock. A copy of the supplement — entitled Transvaal War 1899-1901 — will be displayed with the clock.

But what of the other eighteen? The Trust would welcome more details about them.