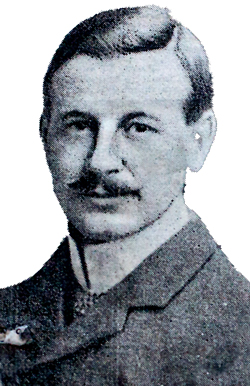 HELENSBURGH mourned the loss in January 1919 of a medical man who had been praised for devotion to duty.

But the life of Major William Smith Sinclair, MB, CM, DPH, very much had its ups and downs.

Born on June 24 1872, the son of burgh dentist Charles Stewart Sinclair and his wife Agnes, he was educated at Larchfield School and went to Glasgow University where he graduated as a doctor.

He went into practice at Pemberton, Wigan, and in 1898 at the Windsor Hotel, St Vincent Street, Glasgow, married jeweller’s daughter Mary Yuile Duncan, of Maxweltown, Dumfries. Both were 25.

They set up home at Brooklands, Upholland, just a few miles from Pemberton, and two years later their only child, Keith was born.

But things were not going well, and in 1903 he disposed of the practice because of his health — he was an epileptic and had become addicted to drugs.

He worked for a few years as a locum, and the marriage deteriorated. In 1908 he obtained a post in Weber, Hawkes Bay, on the North Island of New Zealand, and a letter from him posted in a port of call was the last his wife ever heard from him.

On Monday January 18 1913 the Glasgow Herald reported that Lord Hunter, after hearing evidence, granted a decree of divorce to his wife on the grounds of the doctor’s desertion.

In New Zealand Dr Sinclair was now in a busy practice, but when the First World War broke out in August 1914 he volunteered to join the Medical Corps.

He served in Egypt from 1914-15, at Gallipoli where he took part in the famous landings, and in France on the Western Front from 1916-18 as a Captain, reportedly doing excellent work.

The following year, while his son Keith, then 19, was with the Army of Occupation near Cologne in Germany, the now Major Smith of the New Zealand Expeditionary Force crossed the English Channel from France to Brighton, intending to travel to Helensburgh to visit his father, of Lorn House, 108 West Clyde Street.

But at short notice he was ordered to return to New Zealand in charge of a troopship, the intention being that he would then come back to Britain to take a second contingent of returning soldiers back to their homeland.

However he did not complete the voyage and died at sea on January 25 1919 from disease.

The Helensburgh and Gareloch Times reported that there appeared to have been a very large number of patients on board ship, and it was thought that the very hard work, added to the strain of nearly five years in the field, was the cause of Major Smith’s death at the age of 46.

The obituary concluded: “To deceased’s father, and to the other relatives, the deepest sympathy is extended in their bereavement. The medical profession, in Major Sinclair’s death, has lost a very skilful member.”

His body was taken back to New Zealand, and he was buried at Canterbury Provincial Memorial, Christchurch, Canterbury.

His name can be seen in the First World War section on the Cenotaph in Hermitage Park. His father died in the town in 1945 at the age of 99.