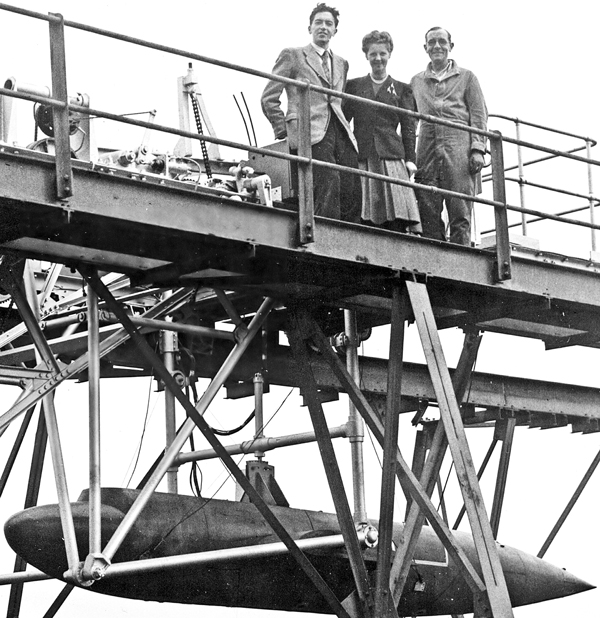 THE Marine Aircraft Experimental Establishment in Helensburgh and Rhu during the Second World War featured on BBC-1 TV during Remembrance Week . . . for the second time.

Last year BBC1 TV told the story of Pyro, the cat that flew with Bob Bird, the MAEE photographer, in a special edition of the Antiques Roadshow, and this year they interviewed Mrs Frances A.McLaren, a former MAEE scientific assistant, for a programme which was broadcast at 9.15 am on Tuesday November 6.

Now well into her 80s and still a car driver, Frances lives in Woodbridge, Suffolk, and she has vivid memories of when, as Frances Shedden, a schoolgirl evacuee from Clydebank billeted in Rhu, she joined what was called RAF Helensburgh.

Frances said: “I gained my Scottish senior leaving certificate at Hermitage School in Helensburgh, where I studied maths, physics, and chemistry, English, French and Latin.

“This enabled me to gain a place at Glasgow University, where I hoped to gain a BSc and then teach maths and science subjects. But this plan came to nought as the Clydebank Blitz actually happened while I was taking my exams.

“My family escaped to safety by moving out of the house on the first night of the raid. A landmine hit our home the second night — and they would have certainly been killed.

“On the advice of a girlfriend’s father I applied for the MAEE job because, as many civilian males had joined the fighting forces, Principal Scientific Officer H.M.Gardner, who was in charge of the establishment, decided to recruit women.”

After an interview Frances was accepted as a scientific assistant, and went to Glasgow Technical College to study applied dynamics and electrical science, gaining a first class pass.

Scientific officer A.G.Smith set them to work on both scale models and full size, testing models in the hull launching tank and performing take off and landing tests with Sunderlands and other seaplanes.

Frances examined and analysed films from the tests on a magnifyng machine called a Megaphot, which resembled a microscope.

She recalls that in the spring of 1941 she went with Mr Smith to the RAF station at Bowmore, Islay, where rockets were fitted under each wing of a Sunderland.

“We flew out to sea, where a marine standby boat anchored a large rubber dinghy as a simulated submarine, and seated in the second pilot’s seat I took various readings in the cockpit,” she said.

“The test pilot, Flight Lieutenant Reid, who was Canadian, became so expert at hitting target dinghies that we ran out of dinghies!”

A year later she was moved to the civilian HQ, then a villa called Rosslea and now the Rosslea Hall Hotel, working in a small back room.

She said: “I was guarded by two RAF men while I analysed films known only to me as ‘Top Secret — Highball Trials’. Only after the Dambusters raid did I know what I had been working on!”

Times were hard for a fashionable, growing 18 year-old. She lived in lodgings, food was available on a points system, and clothes on coupons. Film analysis in a dark room could be tedious and hurt the eyes.

She was advised that if she was killed in a flying accident the only compensation her dependents would receive was £7 for a coffin. She was not issued with any warm clothing, and all she had was a ‘Mae West’ inflatable lifejacket and a parachute.

Nevertheless she considers that her wartime work with the MAEE civilian and service team were some of the happiest days of her life.

“It is gratifying to have worked with so many brilliant scientists, who were also friends,” she said. “We left our mark on aviation history with our backroom endeavours.

“The facts and figures gained from all the aeronautical and hydrodynamic tests done on model and full-scale land and sea planes are those used today for our modern aircraft.”

After the war MAEE returned to its original home in Felixstowe, and Frances went south with her colleagues and decided to stay there.

As well as the BBC she has told her story to retired Merseyside newspaper editor Robin Bird, son of the MAEE photographer, and he intends to include it in his forthcoming second book on the establishment.

Her story also features in 'WW2 People's War’, an online archive of wartime memories contributed by members of the public and gathered by the BBC. It can be found at www.bbc.co.uk/ww2peopleswar.