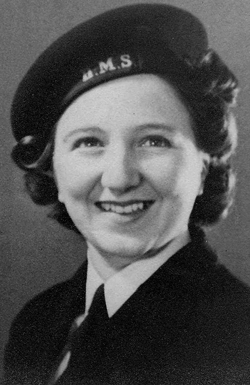 STORIES from World War Two usually feature bravery or tragedy, but for an unemployed Helensburgh girl enlisting was to result in romance.

Marion Reilly, who died in September 2016, spent her later years in Cambridge with her daughter Linda. She treasured memories of her wartime work on degaussing at Helensburgh pier, through which she met the man who was to become her husband.

Her story was supplied to Helensburgh Heritage Trust by her son Paul, who lives in Woodford Green, Essex, and it is an extract from her book ‘A Link in the Chain’ which she published privately.

Marion, nee Glennie, was born in Blairgowrie, Perthshire, but the family then moved to Helensburgh.

At the beginning of September 1939, I found myself unemployed. Our neighbour and good friend, who was the Town Clerk, knew me well, and when approached by the Naval Authorities who wanted to enlist some local girls as members of the Womens Royal Naval Service (Wrens), he put forward my name.

A WRNS Officer knocked at our door one day in December and offered me a post as a technical Wren.

She described the job as photographic work, but it was in the de-gaussing department of the Admiralty, and involved working on the pier.

It proved pleasant and interesting work, but perhaps I should explain what work I was doing and why it had such an impact on my life.

When the Second World War started, one of Hitler’s first aims was to destroy our shipping, and to do this the Germans commenced laying magnetic mines around our coast, in estuaries and harbours.

If he had succeeded, this would have had a devastating effect on our efforts to win the war, but fortunately the answer to this campaign was speedily formulated.

The story has been well documented; how one of these mines, dropped in the Thames Estuary, embedded itself in the mud and at low tide was sighted and excavated by two naval officers.

It was disembowelled and its magnetic mechanism exposed. I think that for this feat the officer was awarded the Victoria Cross (see note at end of article).

The mine was designed that a magnetic needle inside responded to a ship’s magnetism and so triggered off the mine — and naval scientists quickly came up with a defence against it.

To de-magnetise our large ships, cables were slung around their decks and smaller ships were ‘wiped’, sending the ship’s inherent magnetism in the contrary direction.

Ranges where ships could be tested and corrected, by sailing over cables sunk in the sea-bed, were set up all round the British Isles.

The ship’s magnetic force could then be calibrated to give their permanent longitudinal magnetism, and the exact current could be introduced into their equipment.

The system was completely successful, the problems were overcome and most of our ships sailed in safety.

The headquarters of the De-Gaussing Organisation were in Portsmouth, but the first de-gaussing range with under-sea cables was set up on the Clyde off Helensburgh, with our headquarters on the pier.

We were a small team with two naval officers, a physicist, five Wrens, a motor boat and crew, and a Morse code signaller.

My companion Wrens were 18 year-olds, all fresh from boarding schools, and I had never had any office training, so we were a very naive and helpless bunch at first.

We had no idea what was expected from us, so when after the third day, our Lieutenant asked why we were not having tea as usual, one of the Wrens brightly responded by saying: “We can’t. There are no clean cups left.”

Eventually it all began to run smoothly, working on shifts to cover the tidal movements and the arrival and departure of ships. At 25 I was older than the other Wrens, so I was given a stripe and promoted to Leading Wren.

We worked hard but it was an enjoyable time, though marred by sad war news of battleships sunk and many merchant ships torpedoed.

The Clyde suffered from Hitler’s blitzkrieg. Clydebank was severely hit and in Greenock the large whisky distillery on the hillside was set on fire, causing a tremendous conflagration.

Meantime, at the de-gaussing headquarters in Portsmouth, part of my destiny was being formulated.

Fred Reilly had been commandeered at the beginning of the war by the Admiralty to work on de-gaussing and was now in the process of getting the organisation to work.

All was running well until September 1940 when it was feared that Hitler might invade the South Coast. So almost overnight, the Naval headquarters was evacuated and Fred, with others, was despatched to Scotland.

They travelled north by car, but found it a nightmare journey. There were of course no motorways then, and the N1, the old North Road, was the most direct way north. 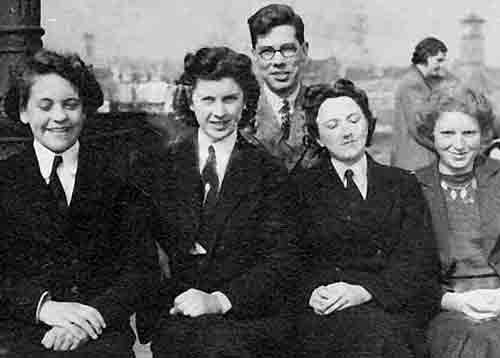 At that time, this necessitated travelling through the many towns on the route. Worse still, there were no signposts and even the railway station signs were removed — to confound the enemy if he landed.

Fred reached Helensburgh eventually and the new headquarters were set up in Cairndhu House, then empty, and in a number of large houses without occupants.

As Fred was head of the DG department, my work brought me into contact with him. We also met at local dances, and Glenn Miller’s music brings back those days vividly.

Eventually we became engaged, and we married three months later, in July 1941.

Although it was wartime and there was a great deal of austerity, we had a splendid wedding, going from the church to my house where we held a reception.

The naval establishment was ‘dressed overall’, complete with flags, to honour the occasion, at the behest of Captain (later Admiral) Jellicoe, who attended the festivities.

Some time later, Fred’s section of the Admiralty removed to Bath so I immediately requested a transfer to that part of the world.

The chance came soon and I left the burgh to move to Avonmouth, near Bristol.