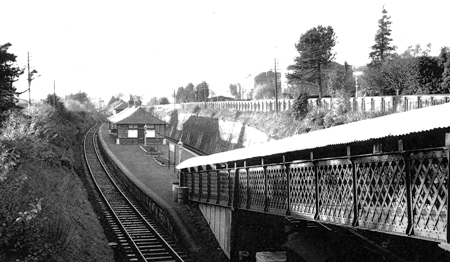 IT HAS been reported — and subsequently denied — that Network Rail is considering closing Helensburgh Upper Station.

The station has been named as 'at risk' in a route utilisation strategy which sets out a vision of the future for rail passengers and Scotland's thousands of miles of track and railway stations.

The £1.4 billion plan consists of a ten year range of options for improving the nation's rail links, but it concentrates on preventing overcrowding and log jams on routes into and within Glasgow and Edinburgh.

However this would be at the expense of rural stations — many historic and picturesque — with up to 23 facing the axe.

In return for more frequent and longer trains, and longer platforms, to benefit city rail travellers, Helensburgh Upper and a range of more remote stations, mostly in the Highlands, might go.

Certainly the station at the top of Sinclair Street is not what it once was in the heyday of steam.

Children used to race from one side of the bridge over the railway to the other as engines passed underneath belching smoke after climbing the hill from Craigendoran, which for some time was the steepest railway ascent in Scotland.

The station was an island one then, with lines on either side as it was used as a passing place.

While a small train — known as 'the Wee Arrochar" — took local people on the Craigendoran to Arrochar route, many local commuters to Glasgow came and went using the high level service. Many local people also used the sleeper to London.

Now down to one platform and without its attractive old buildings, it is still used by trains on the popular West Highland Line, which first opened in 1894. But the fact is that fewer and fewer passengers join or alight at Helensburgh Upper.

Any saving from closing it would be miniscule in terms of the costs of running the railways, and a case can be made on historical and practical grounds for keeping a stopping place which is so much part of the folklore of one of the world's most famous railway lines. It even had a goods yard where the Maclachlan Road flats now stand.

Writing in Helensburgh Heritage Trust's bicentenary book, Stewart Noble recalled that when the upper station and the excavation of a very deep cutting was planned, many of the residents of that part of the town were not happy about the railway invading their privacy.

They tried to persuade the West Highland Railway to build special walls to preserve this privacy, and to keep anything as unpleasant as a train from their gaze.

“They were unsuccessful,” Stewart writes, “but three years later the railway gave them £110 and told them to arrange the work themselves.”

It may not be what it once was, but the line is still an attraction to many travellers. In 2008 the Friends of the West Highland Line entered into a partnership with Network Rail to improve the appearance of the station.