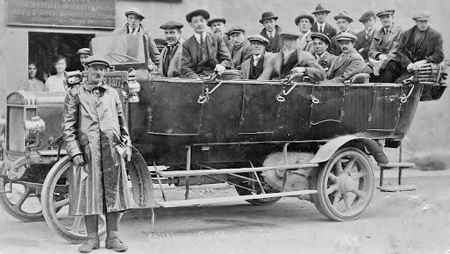 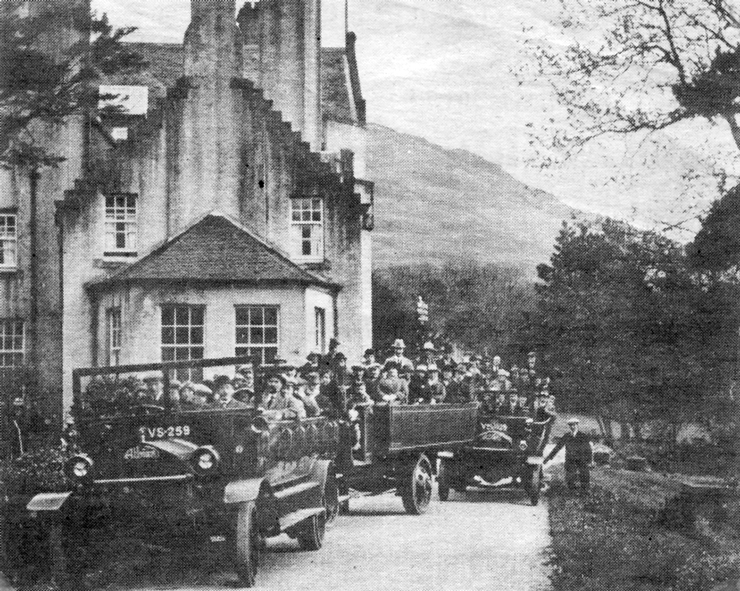 A charabanc outing outside Arrochar Hotel shortly after the end of World War One.

The trip had been organised on behalf of employees of Messrs A.L.Scott, a Glasgow firm of boot and shoe manufacturers, based at Campbellfield Street, and with warehouses at St Enoch Square and St George’s Road.

At the wheel was James Scott Lorimer, an experienced driver. Self-employed, he was also owner of the vehicle.

It was a fine day, and the afternoon run went very smoothly. The party stopped off at Arrochar for a leisurely sojourn, when they “partook of refreshments”, before setting off again about 8 pm on the homeward leg of the journey.

Less than four miles down the Loch Long road however, treat turned to terror when a large elm tree suddenly toppled over the open-topped vehicle. Three people died, with several others injured.

The fatal casualties were Dugald Mathieson (18), a salesman from Maryhill, Peggy Chapman (24), a saleswoman, also from Maryhill, and James Sutherland, from Cranstonhill, employed by Messrs Scott as a motor driver.

The first two died at the scene of the disaster, while Sutherland died next day at the Western Infirmary, Glasgow.

The injured were Annie Blain (20), a saleswoman from Oatlands, John White (22), a salesman from Paisley, Isa Sleigh (26) from Kirkland Street, and Catherine Hyde (26) from Dalmarnock Road.

The death of Dugald Mathieson was especially tragic, as for most of the journey he had sat beside the driver, but shortly before the accident — probably after leaving Arrochar — he had moved to the back seat to be near his girlfriends.

The dead and injured were taken to Arddarroch House, Finnart, where they were attended by Dr Imrie from Garelochhead. Also promptly on the scene were Superintendent McKay from Helensburgh and other police officers.

It seemed like an act of desperate misfortune, as indeed it was, but it emerged that the stability of the tree had been compromised by two separate actions at the site beforehand.

The unfortunate incident was to form the basis of protracted legal action which reached as far as the House of Lords, and which came to be known as the Loch Long Charabanc Case. This is how events unfolded . . .

The Fatal Accident Inquiry took place at Dumbarton Sheriff court on July 30 1925, before Sheriff Menzies and a jury. Procurator-Fiscal H.L.Yendall examined witnesses on behalf of the Crown, while also present were legal agents representing various parties.

They were George Bradley, on behalf of the Western District Committee of Dumbarton County Council, J.G.Patrick, on behalf of the owner of the charabanc, along with Alexander Bell and William Ritchie, both appearing for the passengers in the vehicle.

James Scott Lorimer provided a gripping and compelling account, and his narrative includes:

“At a part of the road about 500 yards south of the farm of Craggan (near Glen Douglas road end), I saw a large elm tree on the left hand side of the road.

“A rock jutting out on the north, or Arrochar side, prevented me from seeing the tree until I was nearly alongside it. The ground rises abruptly at this part, which was well-wooded at one time, but now a good deal of timber had been cut down.

“The tree was growing in a recess on a projecting piece of ground on the north side of the road. It was about 14-15 inches in diameter, and some 30 feet in height. As I approached, it was swaying and just on the point of falling.

“I appreciated the danger, and in an effort to escape the falling tree, I accelerated the speed of the vehicle, but did not quite clear to prevent the trunk of the tree hitting the back of the rear seat.

“I heard the crash, and drew up within 20-30 feet, when I found the rear seat of the charabanc had been cut clean off, as well as the second back seat. There was only one passenger that I saw, a young lady, left sitting on the latter seat.

“The other passengers who had been injured were lying scattered on the roadway. The dead and injured were removed as expeditiously as possible in the charabanc, the machinery of which was still intact, to Arddarroch, the property of Mrs Brooman White.

“There everything possible was done for them, pending the arrival of ambulances which conveyed them to the Western Infirmary, Glasgow.

“Later, I went back to the scene of the accident, and had a look at the tree. I took 15 photographs, but unfortunately the light was bad.

“I examined the roots of the tree, and in my opinion, for a tree of the height it was, these were not strong enough to hold on to the soft shingly soil. They were exceptionally short, and appeared to have been cut, but not recently.

“I was familiar with the road, and I had travelled on it often. I had not previously taken any notice of this particular tree. At the time of the accident, I was travelling at 18-20 mph, and had a clear view. It was a calm night, with no wind.”

Harold Bryan, a salesman resident in Kirkintilloch, and a passenger on the charabanc, said the whole thing happened in a matter of seconds. He occupied one of the front seats, and saw the tree falling. He said the driver did his utmost to get clear in time, but he was unsuccessful.

Helen Queen, a saleswoman from Partick, who occupied the seat nearest the lochside in the second back row, said she was looking over at the loch, and was quite unaware that there was any danger, or that an accident had occurred.

Then she turned round with the intention of speaking to her companions, and discovered the back was off the charabanc, and that her companions were lying on the ground.

Duncan Ferguson, a fireman with the LNER at Springburn, was one of the party. He was struck on the left shoulder by a branch, and when he came to, he was standing on the road, 15-20 yards from where the tree fell.

Andrew Milne, foreman carter, residing at The Hut, Craggan, Loch Long, said he had been working for Messrs Ferguson Brothers, timber merchants, Paisley, who owned the timber on this part of Luss Estate.

He had seen the tree that had fallen many times — it was a fair-sized elm, standing fairly erect on a projection of rock. The ground at the back was excavated, and he did not think it was a safe tree, because there was not enough soil around the roots to hold it.

Hugh Ferguson, timber merchant, of Messrs D. and H.Ferguson Ltd., of River Cart Sawmills, Paisley, said his firm bought a specified number of trees on the Luss Estate. The particular tree was in no worse position, he considered, than the others.

He did not notice that the tree was standing on a projection of loose rock, but the embankment on either side appeared to have been excavated.

In his opinion, the tree was not in a dangerous state. Had he  been informed that it was dangerous, he would have had it taken away.

The jury, having been addressed by the Sheriff, retired for 60 minutes before returning a formal verdict, to which they added a rider.

They stated that owing to the removal of earth and soil from the base of the elm during road widening operations, the tree was rendered unsafe, and should have been removed at the same time as the road was widened.

No blame whatever was attached to the driver of the charabanc, who did all in his power to avert the disaster.

There is a carved stone set into the roadside wall almost opposite Arddarroch Lodge at Finnart, commemorating the building of the road. A transcription reads: “This road was made from the Castle of Rosneth to Tenne Claugh at Arrochar in the year 1787 by His Grace, John Duke of Argyle. Erected by Donald Fraser.”

Today the alignment of the road from there to Arrochar remains essentially as it was, although other work has been carried out over the years. This stretch was officially closed in 1911 because of storm damage to the bridge at Glenmallan, though many motorists and cyclists continued to use it.

This lasted until 1921, when a heavy spate destroyed the bridge. The road was now completely closed, with only a plank in place across the burn. The pressing need for a completely new bridge provided the catalyst for a complete upgrade of the road.

The work was completed by May 1924 at a cost of £75,000. Some 20,000 tons of rock had been removed, swiftly followed by the provision of a tarmacadam surface. The way was now clear for a resurgence of the Three Lochs Tour, and it helped set the scene for the tragic outing of June 1925.

It became clear that some people felt that justice had not been done, and in February 1926, it emerged that five parties were seeking damages of up to £750 from the Western District Committee of Dumbarton County Council, and that Lord Ordinary at the Court of Session, Lord Murray, had given approval for a trial by jury.

Those pursuing the case received a major setback in May 1926, however, when the Court of Session Lords decided there was no general duty on the road authority to inspect nearby trees to see whether they were stable or not, contrary to Lord Murray’s interpretation.

By early August 1927, it was revealed that the matter had been taken on appeal to the House of Lords and considered by Viscounts Dunedin and Sumner, along with Lord Blanesburgh.

Lord Dunedin, in allowing the appeal, stated that a case had been made out for a trial, with the concurrence of the other two Lords. The case was being remitted to the Court of Session, and it would be left to the Court there to decide whether there should be a trial by jury.

In late June 1928, Lord Murray gave judgement at the Court of Session. The defendants were absolved, with expenses.

He stated the whole case turned on a question of fact — the tree as it stood had shown no overt signs of being about to topple.