A number of local people remembered Allan as an art teacher and a founder member of Helensburgh and District Art Club — most of all his grand-daughter, Karen Fraser, and a niece, Aline Campbell who now lives in Innellan.

Karen said: “I still live in Helensburgh in my grandparents house, in which I remember my spare room being my grandfather's art studio when I was little.

“He was always working on a painting, whether it be a commission for someone or for the latest art exhibition.”

Allan McKenzie Fraser was born in Helensburgh in 1909, the son of plumber ‘Badgie’ Fraser who lived with his family at 122 East Princes Street.

He attended Hermitage School, where he later taught art, and went on to study at Glasgow School of Art. He became an art teacher and served in several Dunbartonshire schools, eventually becoming head of the art department at Dumbarton Academy.

He married Christina Moore in 1941, and served as a mechanic in the Royal Air Force from 1942-45. Their son John, now deceased, was born in 1945, and in due course he had a son, also Allan, and daughter Karen.

Helensburgh and District Art Club was formed in 1951, and Allan and his great friend Gregor Ian Smith, a very prominent local artist, were among the founder members.

He had five paintings on display at the Art Club's first annual show in the Victoria Hall in September 1952, and they were reviewed by a critic in the Helensburgh and Gareloch Times.

“Allan M.Fraser's 'Galloway' was a landscape in which one could feel the clear sunlight,” he wrote. “So too in 'Dumfin Farm' and 'Loch Lomond', though there cooler tones prevailed. In the latter the long curve of the road carried the eye right on to the continued curves of loch and hill.

“His 'Iona' brought out the charm of the Cathedral's perfect situation, though the outlines of the building seemed a little sharp. His flower study of anemones was very pleasing, the varied hues of the flowers contrasting well with the mass of turquoise in vase and foreground, the fallen petals making an added note of interest.” 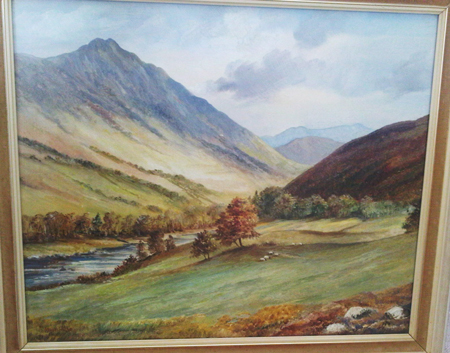 Karen Fraser recalls: “My grandfather’s artistic streak rubbed off on my dad who also did many paintings which are dotted about Helensburgh in friends houses. I used to do a bit too, but not for a while, and I was a member of the art club for a couple of years.

“My brother, who lives in Glasgow with his wife and new baby, has started doing sketches and paintings also when he is working away from home, so we did think of doing an exhibition of grandfather, son, and grandchildren.

“My grandmother put on an exhibition of his work not long after he died.

“Maybe we might even offer some of grandfather’s paintings for sale, as we have many paintings of his, a mixture of oils and watercolours.”

Aline Campbell says that she too has several of his paintings, painted over a number of years. He specialised mostly in landscapes, but was also in demand to paint pictures of local yachts.

His other hobby was bowling, and he was a member of Helensburgh High Green.