After she left school she went on to study Traditional Music Performance at the North Highland College in Alness, Ross-shire from 2001-2.

She completed a BA with honours in Scottish Music at the Royal Scottish Academy of Music and Drama in Glasgow, where she studied from 2002-6 and was awarded the Sir Jimmy Shand Scholarship for musicianship. Now she is a full-time musician based mostly in Edinburgh.

Eilidh is a prolific composer, and many of her tunes are now being played and performed throughout the world. She has toured in England, Ireland, France, Germany, Denmark, Russia, Romania, Egypt and several other countries.

She said: "I have always been influenced and interested in the music from my home area, researching this as part of my degree, and I have many other musical interests which form part of my repertoire."

She also teaches fiddle to groups and to individuals, and has considerable experience teaching at workshops with many organisations and at festivals.

Eilidh is one half of a Scottish music duo with Mark Neal from East Kilbride, and they play traditional and contemporary tunes and songs with many of their own compositions on fiddle, guitar and vocals.

In the traditions of Scottish music with many influences from the west coast, they blend the historical and modern perspective using older and newer compositions. They have taken that music to Europe, touring successfully.

Both compose tunes and songs, taking influences from a wide range of musical styles from piping and fiddling to indie/funk/jazz and everything else around.

In addition to playing, they are both experienced teachers in their instruments, and are available together for workshops and master classes in single instrument or mixed instrument settings. 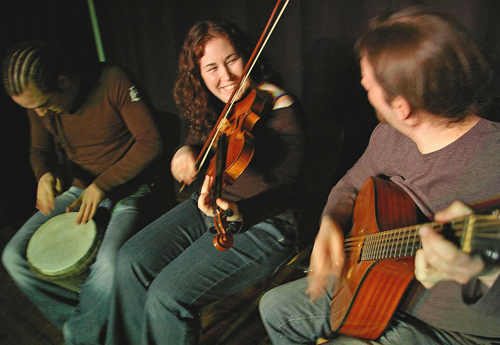 They are also both members of the occasional three-piece band Heeliegoleerie (pictured) with Ali MacLeod from the Black Isle, and the band won a Danny Kyle Award at Celtic Connections in 2006.

Eilidh and Mark have their own website www.fiddleguitar.com which gives details of past and future gigs.

She said: “We play a mix of traditional Scottish music, funk, jazz and electronica. Our aim is to try to cross over the boundaries, and be able to play in a jazz club for folk club.”

Eilidh's prowess was recognised in January 2010 when she won the Best Achievement for Argyll award in the 2009 For Argyll Awards, run by the website of that name.

In October 2010 she reached the semi-finals of the BBC Radio Scotland Young Traditional Musician Award in Coulter, South Lanarkshire, but after a weekend of intense preparation and performances was pipped for a place in the final.

In autumn 2009 she was also closely involved in the setting up of Helensburgh Trad Music Live, a group of local people, who play, or are interested in traditional Scottish music.

The group was set up to bring like minded people together for regular sessions, to run local events, concerts and workshops, working with established arts organisations.

They hold a traditional music session every Sunday at 6pm at the Rhu Inn when anyone interested is welcome to come and join in.