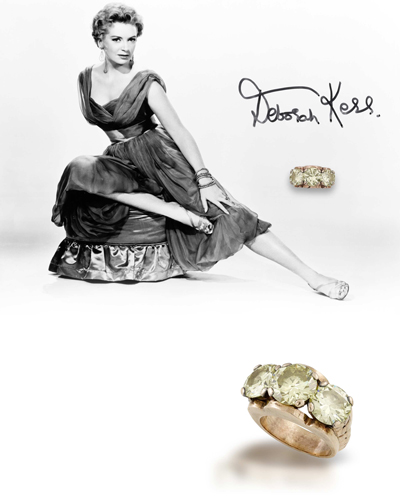 JEWELLERY owned by Helensburgh film star Deborah Kerr was sold at auction by Bonhams in London on Thursday December 4 2008 — and the prices exceeded all expectations.

Deborah Kerr, who was born in 1921 and died in Suffolk in October 2007, starred in more than 50 films over four decades, most memorably appearing in From Here to Eternity, with Burt Lancaster (1953), The King and I, with Yul Brynner (1956) and An Affair to Remember, with Cary Grant (1957).

She was also leading lady to many more of Hollywood’s most famous leading men, including Clark Gable, Robert Mitchum, James Mason, David Niven and Spencer Tracy.

The collection sold at Bonhams New Bond Street premises included many of the late actress’s most favourite pieces, worn and cherished when she was at the height of her fame.

The main item was her diamond, three-stone engagement ring from her first marriage to Squadron Leader Anthony Charles Bartley, which was expected to fetch between £20,000 and £25,000 — but it was bought by an absentee buyer for £33,600.

Dating from circa 1945, the year they married, Lot 21 was the ring, comprised of three brilliant-cut diamonds of yellow tint, weighing 2.32, 2.98 and 2.17 carats respectively.

The entire piece is highly articulated and set with collet mounted cabochon turquoise. It also has a detachable tied ribbon-bow pendant/brooch with a swing drop.

The remaining items also exceeded sale price estimates. Lot 23 (right) was a stunning 20th century collar necklace composed of a row of oval-cut amethysts, which graduate slightly in size from the centre towards a hexagonal-shaped amethyst clasp.

Suspended from this row is a fringe of seven similarly-set amethyst drops spaced by filigree floral motifs. The whole fringe is embellished with spherical bead drops. Its es

The collection, which was sold on behalf of Deborah Kerr’s family, had been sitting in a bank vault since her death.

Bonhams also offered two 23 x 14 inches Deborah Kerr costume design sketches from the 1952 Paramount movie "Thunder in the East" in their Entertainment Memorabilia sale on December 21 in Los Angeles. They were expected to fetch up to $500, but were not sold.

Rendered in gouache on paper, each depicts the star wearing elegant 1950s-style dresses; both somewhat annotated in pencil and signed in lower margins "Edith Head". One has further information about materials and costs on the back as well as an attached black and white snapshot showing the star wearing the finished dress.