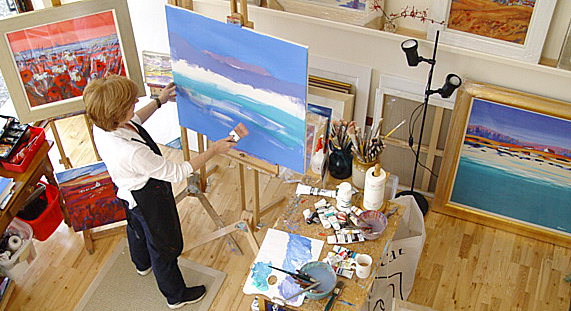 ONE of the most commercially successful of the 21st century Helensburgh and district artists was Mary Batchelor, who passed away after a long battle against ill health in October 2027.

Mary’s very colourful works adorn art galleries throughout Britain and fetch high prices at art sales and auctions. She was inspired by Scottish landscapes and she matched its magical presence with vital colour and broad brush work.

A full-time artist whose home was formerly in the burgh but who latterly lived in Rhu, Mary attended St Bride's School (now Lomond) before she trained at Glasgow School of Art. She worked solely in acrylics, usually on canvas.

She studied under the tutelage of Peter Howson, David Linley and Norrie Kirkham. “All of them were a huge inspiration,” she said in an interview in 2010. It was not her first career, however. “I hoped to go to Art School but went to the Western Infirmary to do physiotherapy instead — such was parental decision making in those days!” she said.

“It wasn't until my son and daughter were settled at school that I took the opportunity to go to the Glasgow School of Art day classes.

“I eventually submitted a piece to the Royal Glasgow Institute, it was accepted and then was given the red dot which denotes that a painting is sold, and then the galleries ask you to exhibit . . .”

She thrived on bringing her beloved Scottish homeland to life with bold, vibrant work, but also revelled in travel abroad, enjoying the challenge of capturing unfamiliar scenes and different light.

“The brilliant Scottish Colourists — Cadell, Peploe, Fergusson and Hunter — are also a source of great inspiration to me," she said.

“I admire the bold use of colour and texture, and the confidence exuded in every brush stroke which has contributed so richly to the tradition of painting in Scotland.

“All I try to achieve with my work is to do justice to the land and sea which I see before me in Scotland. They are my passion and the reason I never struggle for something to paint.

“I love to make new discoveries and find new visions around each corner, but, equally, I have certain favourite locations of which I never tire, returning over and over again — often finding a new light or element to capture.

“It is Scotland’s ability to surprise, no matter how well you think you may know her, which has always amazed me. 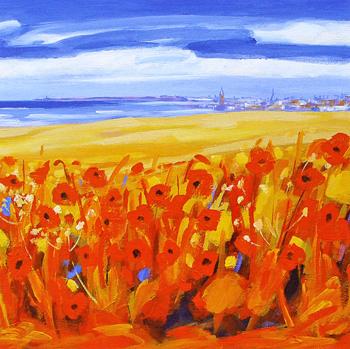 “I paint solely using acrylics. They sit well with my technique which is one of broad application and rapidly working the paint. The fast drying paint has to be manipulated quickly and it is this to which I attribute the sense of movement and spontaneity within my work.”

Winner of the MacRoberts Mayfest prize in 1997, her reputation continued to grow, as did her network of galleries.

Mary's work could be found in a wide range of Scottish galleries, and she showed regularly in London and the home counties.

In 2008 she had a busy year. In January she exhibited at Tracey McNee Fine Art in London’s Mayfair, and at Southside Art, Glasgow.

In February she was one of  ‘30 Leading Scottish Artists’ whose work was on show at the Contemporary Fine Art Gallery at Eton, while in March it was the Glasgow Art Fair with Art Exposure Gallery.

In February and March 2009 her work was featured in the Caledonian Show of Leading Scottish Artists at the Contemporary Fine Art Gallery in Eton, London.

In March her work was seen at the Landscapes Art Exposure Gallery in Parnie Street, Glasgow, and she was featured artist at Regatta Fine Arts in Kings Linn, Norfolk, and the Tighnabruaich Gallery in Argyll.

In April she exhibited at the Paisley Art Institute Annual Exhibition and the Glasgow Art Fair in George Street, Glasgow, and she was featured artist at the Landscapes Art Exposure Gallery. In June she exhibited at Glasgow's Home Gallery.

In May 2010 Mary's latest works were on show at the 44th annual Brighton and Hove Artist's Open Houses Festival, and she said that this was her main exhibition for the year. Her paintings were at a new office block in Ditchling Road, Brighton, and one of them, 'Tiree Summer', was used on the cover of the festival catalogue. The 32" x 34" work, along with another large painting, was sold before the private viewing, and they are now in Switzerland.

Mary was a featured artist with www.Scotlandart.com in their new premises in Bath Street, Glasgow, in September 2010 and then with the Atholl Gallery at Dunkeld from November until January 2011.

The residencies are an annual event organised by L’Association Charles Rennie Mackintosh en Roussillon, which was formed in 2004, initially to organise an exhibition for the celebration in Roussillon of the centenary of the Entente Cordiale with Scotland.

In recent years it has run a programme to increase awareness of the life and work of Mackintosh and, in the spirit of Mackintosh, to encourage and to pioneer cross-cultural exchange initiatives. The association is administered by an elected committee and has a French and a Scottish president. It is affiliated to the Charles Rennie Mackintosh Society in Glasgow.

The principal organiser of the residency programme is Robin Crichton, who was involved in the Scottish film industry for many years, and he told Mary that her name had been put forward and asked if she would take part.

“We lived in separate apartments in the centre of Collioure, and we were free to soak up the culture and landscape for the month,” Mary said. “An exhibition of work from the artists time there is arranged in France and Scotland, and we were asked to donate one piece to the association`s permanent collection in Collioure.

“To have an opportunity to immerse myself in the culture and landscape of that area away from the normal pattern of my life was amazing and very exciting.” 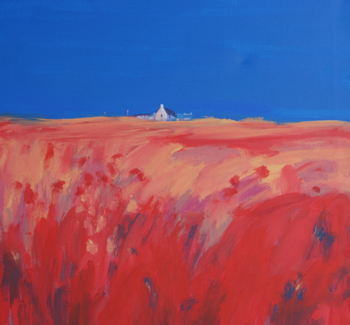 In July 2012 an exhibition of her latest work opened on the island of Islay, staged by Petra Pearce at her Outback Gallery at Sanaigmore, and it was the first work by Mary to be exhibited after she returned from Collioure in France last year.

Petra told Mary: "Each day I walk past your paintings and think what a lucky woman I am! The paintings are glorious and well worth the wait.

"Your time in Collioure has enriched your painting to my mind, not at the foundations which were solid and strong already but in the subtle finishing which takes your work to the next level. Very exciting."

There are corporate collections of her work at Deloitte Touche, MacRoberts Solicitors, Conoco (UK) Ltd., Russell and Callander, Graham Technology, the Trades House of Glasgow, and Kidstons of Glasgow.

Her work was made available to the wider public through her best pieces being put into print, and they were also available in card form.