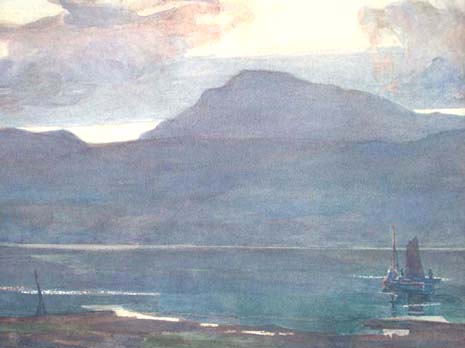 A PAINTING by Helensburgh artist Erskine Beveridge, “After Sunset, The Gareloch”, was acquired by the Anderson Trust from the fine art dealer Neil McRea in 2008 — and provides this artist’s interpretation of a familiar view.

It is also a welcome addition to this growing collection of paintings inspired by this area, many by artists who at some time lived and worked here.

The new painting will be on view to the public in Helensburgh Library as part of future exhibitions of paintings from the Trust.

The annual exhibition has become a regular feature in the Library which is appreciated by many local residents. Mounting these exhibitions is one of the more obvious tasks of the Trustees.

Others include research and a continuing commitment to the intentions of the donor, Miss Annie Templeton Anderson, in maintaining the paintings in good order and seeking to add to the collection with new works that have a specific Helensburgh connection.

The watercolour painting “After Sunset, The Gareloch” (top), was probably painted around 1912.

Neil McRea comments: “The simplicity of the composition together with the restricted colour range each recognise and reflect the poetic vision that was prevalent in the work of several members of the Glasgow School during this time.”

He also identifies “an awareness and appreciation for Pre-Raphaelite romanticism”.  Certainly anyone viewing the Gareloch of an evening even today is unlikely to remain unaffected by the poetic mood it inspires. 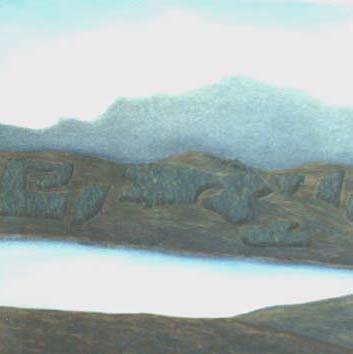 It is interesting to compare the mood expressed in Erskine Beveridge’s painting with that of two other paintings in the Anderson Trust collection of the same view.

James Whitelaw Hamilton’s “Evening on the Gareloch” (middle), painted at the end of the 19th century, is similar in its simplicity, and its under-stated tones have greatly benefited from recent cleaning and restoration work.

The third painting, “Evening Gareloch” (lower) by the contemporary local artist, Claire Scullion, is a much stronger, though none the less subtle, interpretation of the same view, which introduces a slight tension between the natural landscape and the man-made forestry plantations on the hill.

Erskine Beveridge was born in 1875. His father was Alexander Watt Beveridge (1835-1916), surgeon major with 78th Highlanders who served in the Indian Mutiny, including the defence of Lucknow and the final Lucknow operations, and the 1868 expedition to Abyssinia.

The successor to the linen factory business was his uncle, also Erskine Beveridge (1851-1920) who was also a published archaeologist and photographer. His first cousin was Lord William Beveridge, author of the Beveridge Report in 1942 which led to the creation of the welfare state in the UK.

The artist (pictured left c.1910) grew up in Edinburgh in a large family, having two brothers and three sisters. He went to school at the Edinburgh Academy from 1885-93, the same school attended by his father, two uncles and two brothers.

He studied at Trinity College at Cambridge University from 1893 and graduated with a BA in mechanical science with honours. Although he was a trained engineer, his occupation was always listed as artist. He lived in Glasgow before moving to 10 Campbell Street, Helensburgh, in 1912.

A painter in oil and watercolour of seascapes, coastal scenes and landscape who exhibited between 1904 and 1939, he exhibited at the Royal Scottish Academy, The Royal Scottish Society of Painters in Watercolour, The Glasgow Institute, The Walker Gallery Liverpool, The Manchester City Art Gallery and the Royal Institute of Oil Painters.

He painted in a style that art historians have compared with the work of the fellow Glasgow artist, Robert Clouston Young. Many of his paintings were inspired by the Clyde and surrounding area

His niece and goddaughter Ann recalled that he worked during World War Two repairing or constructing precision instruments. She was not aware that he ever had any artistic training.

Ann remembered him enjoying classical music, and he had a large collection of old survey maps of Scotland for cyclists and walkers.

Erskine moved to North Berwick in retirement, and died there in 1970 aged 94.