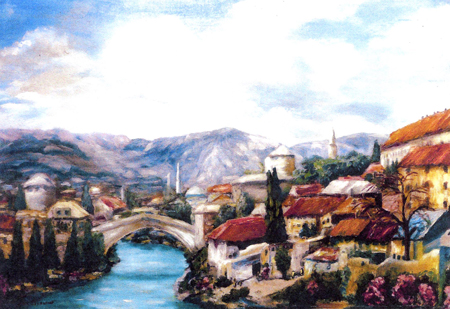 AN ATTRACTIVE painting by a Helensburgh artist turned up in the summer of 2008 . . . in a disused mill in Oldham, Lancashire, now used as a secondhand furniture store.

The 28 x 20 inch oil on hardboard painting by Jan Stirling is entitled ‘The Town of Mostar’, and it immediately caught the eye of John Crabbe, from nearby Todmorden.

“It cost me a mere £12 from a dealer with a display slot in the mill, and now admiring visitors keep asking me about the painting’s provenance,” he said.

So Mr Crabbe wrote to The Secretary, Helensburgh Art Club, c/o The Victoria Hall, to try to find out more, as he had been told that the artist played a very active part in the club.

“The picture now evokes frequent happy memories of holidays spent in that region long before the collapse of Yugoslavia,” he wrote.

“My reason for writing is to discover whether you have any idea of when the picture was produced, and to find out the years of her birth and death.”

The letter was passed to Art Club secretary Anita McLaren, herself a well known local artist, and she was able to put Mr Crabbe in touch with the artist’s daughter, Irene Brown, who lives in the town.

Mrs Brown said that her mother, who lived from 1904-96, came to the burgh with her husband after he retired.

They lived in Craigendoran, and she became closely involved in the Art Club, serving as secretary in the 50s and 60s.

“This painting must have been done when she was on holiday,” she said, “as she travelled extensively around Europe to paint. She normally worked in oil on hardboard, and concentrated on painting landscapes until late in her life, when she mostly painted flowers.”

Anita added: “We were delighted to be able to help, and isn’t it nice to think that a painting can give so much pleasure to someone.”