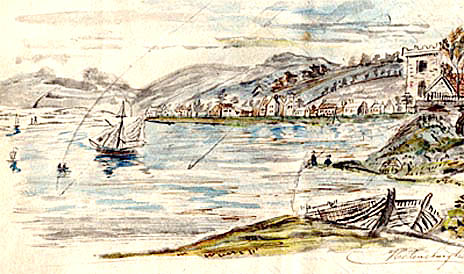 A REMARKABLE relic of Helensburgh of days gone by has been unearthed by James Brown FSA Scot, a historical researcher based in Ayrshire.

It is a manuscript volume dated 1822, containing six poems and several small vignettes which depict sailing and loch scenes. If that was the date the manuscript was prepared, the picture of Helensburgh would be one of the earliest known.

James edits the website of Baltersan Castle, a 16th century Scottish Renaissance tower house mansion six miles from Turnberry, and is vice-chairman and founding member of Maybole Historical Society and a member of the Charles Rennie Mackintosh Society.

He says: “In the manner of one thing leads to another, the Helensburgh interest started with Mackintosh at Baltersan Castle which led to Hill House — inspired by tower-house architecture — to me acquiring the small manuscript of poems with illustrations by an amateur artist.”

Now he would like to know a lot more about the manuscript and the artistic poet, and he is appealing for information.

The manuscript is written in one, neat legible hand throughout, on original marbled card, with the covers now detached and split. It contains six poems, almost certainly original, and seemingly unpublished, by an unidentified author.

The opening poem, 'Memory’, a poem wrote in the beginning of 1822' tells of the joys and perils of the sea. The opening lines are:
'How blest afar upon the silver sea
When the tall vessel rides before the wind
The mariner will tell how warily
He piloted the dangers far behind.'

In the second poem, 'The Schoolboy's Verse'. the author harks back to an idyllic childhood when he would sail his boat on the river. He writes:
'I wish that I were youthful yet
As when with high and beating heart
I swan across that rivulet.'

The next two poems concentrate on the plight of an orphan, possibly the author. In 'The Orphan's Comfort' the author laments the fact that:
'My parents have gone to their place
They have gone to the land above
The dwellings of virtue and peace
With the gentle spirits of love.'

The penultimate poem is 'The Widow's Soliloquy' and relates the feelings of a mother for her child on the death of her husband and the child's father. When she too dies there can be no words of comfort and
'She hath no boon nor pearl to give
But like thy father may look down
From that bright place where he is gone.'

The final poem appears less personal and more philosophical, and it is littered with many classical references. The author asks the question:
'Who can see thro' the hidden mist of year
And pace thro' life above its doubts and fears.'

His answer, seemingly, is no-one, claiming even:
'The Chaldean Seer could only half descry
The hidden day by his reflected eye.'

The manuscript is illustrated throughout with a series of pen and ink and watercolour vignette drawings, varying from the talented amateur to crude. One or two are identified — a view of Helensburgh, and an Italian cottage, both of which fall into the category of talented amateur.

There is also a steamship with sails up, which looks rather like Henry Bell’s Comet, and others include loch scenes, fashions and a coat of arms which is neither Helensburgh’s nor the Colquhoun’s.

Mary Jane Selwood of the local Anderson Trust art collection said of the burgh seafront sketch: “I can't remember seeing it before. The free style of painting looks more recent than 1822, though the scene would fit that date.”

James (left), who is a council member of the Scottish Castles Association, is available to speak to organisations on historical topics, and he has begun a new venture, organising relaxed, informative and entertaining tours.

“They are the product of a lifetime of being fascinated by my surroundings,” he says. “I was born and raised in Glasgow, and have lived in Ayrshire for the last ten years. I enjoy foreign travel and have visited four continents, and I have an unquenchable thirst for learning.

“I am keen to share my enthusiasm and learning with others through being a writer, tour guide and public speaker. In doing so, I aim to promote the sustainable economic development of Ayrshire and the West of Scotland.”