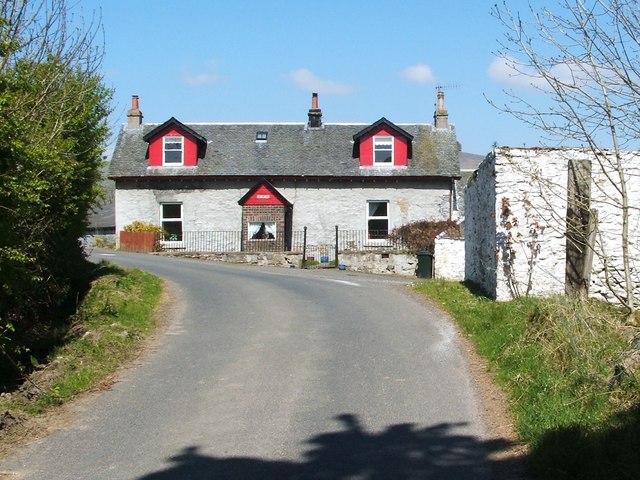 A GLEN FRUIN man turned his back on farming — and harvested a very successful new career as an actor.

Jim Sturgeon, who grew up at Drumfad Farm with his parents and three older sisters, works in film and television, and has appeared on the West End stage in London and in theatres around the UK. 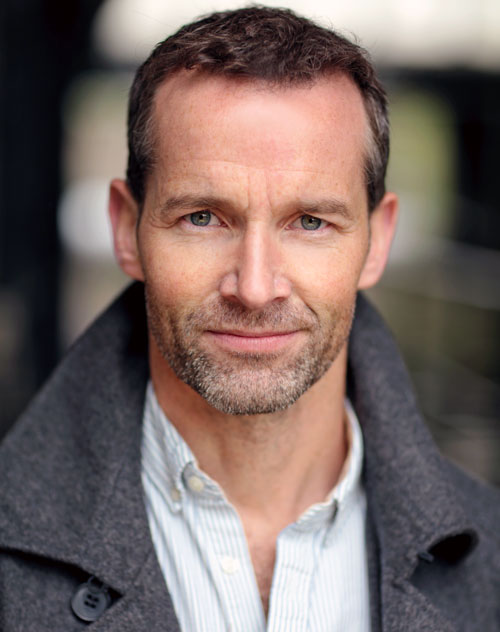 His most recent TV part was in the highly popular Shetland crime drama series, when he played popular island lawyer Alex Galbraith, whose murder provided the plot for the sixth series.

The series opener delivered plenty of suspects including an ex-soldier angry that Galbraith refused to defend him when he was accused of abusing Iraqi prisoners; a Shetland mum who lost custody of her kids in one of his cases; and a dodgy businessman with links to his wife.

This was his second part in Shetland — he was in the pilot series filmed in 2012 playing a character called Ronald Haldane, a waster who had got caught up in the murder that the series focused on.

Recently he was lead actress Suranne Jones’s onscreen former partner Iain in another hit drama series, Vigil, set on board a nuclear submarine from the Clyde Naval Base at Faslane.

It is all very different from his younger years working on Drumfork Farm, where his family arrived during 1940.

His grandfather James, who he was named after — he was the 20th of 20 grandchildren and the only male Sturgeon so, he says, his parents had no choice — moved from Beith in North Ayrshire.

Mainly a hill farm, about 800 acres, Drumfad Farm had a small dairy herd which he ran, along with a few hundred sheep and a herd of beef cows.

Jim’s father, William, was two when they moved, the second youngest of a family of six. He left school at the age of 15 and took over running the farm.

He met Elma Wilson from Garshake Farm in Dumbarton during their time at the Loch Lomond Young Farmers Club, and they were married in 1962.

In the mid-60s they moved into the farmhouse at Drumfad when his grandparents moved to the next farm, East Kilbride when it became vacant, and they kept acquiring neighbouring land throughout the years.

“Looking back, I had an absolutely incredible childhood at Drumfad,” Jim said. “My playground was over 1000 acres and there were treehouses, gocarts, motorbikes, tractors — so many exciting and dangerous things for a young boy to get up to.

“My dad would let me have a few pet lambs every year which I would feed and look after, then he would take me with him to the lamb sales where I would sell them and he would let me keep the money.

“Once I got older and had made enough money from selling my lambs I bought a calf from my father which I reared and then sold for a far greater profit. This was basically my dad teaching me ‘the business’.”

Jim went to Hermitage Primary and Hermitage Academy, and still keeps in touch with many school friends. He played football in the Helensburgh primary schools competitions, being on the losing sides in two finals.

At the Academy he started playing rugby, which he really enjoyed, and he got his first taste of acting when he joined the Young Farmers Club when he was 15.

He said: “The club certainly made a huge impact in my life. I made so many friends and have so many amazing memories. They had an annual variety concert at the Denny Civic Theatre in Dumbarton, and I loved every minute of it.

“The concert consisted of a 20-40 minute play, three 10 minute cabarets, and an array of sketches, singers and dancers, and it was on for three nights on the first weekend of February.

“When I was about 21 I wrote, directed and compered the entire show, which was a lot of work but incredibly rewarding. We took one of the cabarets from that year to a top three finish in the West of Scotland finals which was amazing.”

He left school at 16 and went to work on the farm (left) with his dad and sister, until finally realising that it was not for him.

“It was hard but honest work, as even though Glen Fruin can be one of the most beautiful places, the weather can be utterly brutal at times,” he said.

“I worked away for years thinking ‘one day I would get good at this’ or ‘this stuff will all make sense’, but it never did — I just didn’t have that gift for farming that so many of my family and friends had.

“I decided when I was about 26 that I’d need to find something else to do for a living, and that was when I hankered back to the concerts during my young farmer days and thought that could be a possible way forward.

“I didn’t really know anything about acting though, and apart from Drumfad being used for one of the farms on ‘Take The High Road’ had never really been exposed to it.

“It took me a couple of years to finally pluck up enough courage to tell my parents. It was in the middle of lambing season, so mid-late April, and we had 1400 ewes lambing outside which we had to feed and check five times a day.

“We were also calving about 100 suckler cows outside at the same time, and they also needed fed and tended as often as possible. We did all this and were still milking around 50-60 cows twice a day so it was a busy time of year.

“I’d had a pretty full-on day and got in late, and during a conversation with my mum and dad just said that I didn’t want to do this for the rest of my life.

“They both looked a bit shocked but they took it in their strides and accepted it. After a few seconds my mum asked what I wanted to do, and when I said that I wanted to be an actor they reacted brilliantly to that as well.”

He attended a National Certificate drama course at Clydebank College, and a teacher, Cara Kelly, managed to get him an audition at the Royal Scottish Academy of Music and Drama, now the Royal Conservatoire of Scotland, at the age of 28. After three years he left in 2003 with a BA degree in Acting.

“After I left drama school I spent a few months back at Drumfad as my dad had died the year before and there were a few things to sort out,” he said. “Then in September I moved down to North London to start a new career as an actor.”

His first professional theatre jobs brought him back across the border to the National Theatre of Scotland, Dundee Rep, and Perth Theatre.

In 2013 he landed the role of Dr Alec Harvey in Kneehigh Theatre’s production of ‘Brief Encounter’, which gave him the opportunity to play in theatres in America and Australia.

“It was great to get a lead role in such a brilliant production and be able to share the stage with some of of the most talented actors that I’d ever had the pleasure to work with,” he recalls. It was a charming show, full of love, laughs and tears and got such a huge reaction wherever we went.

“The producers decided to bring the play back to London’s West End in 2018 and asked me to step back into Dr Harvey’s brogues, which I gladly did and we enjoyed a limited run and incredible reviews.

“I’ve been in two West End plays over the last few years and they’ve both been incredible. ‘Brief Encounter’ was one, and the other was ‘The Father’. This is the play that went on to become the multi-award-winning feature film that Sir Anthony Hopkins won an Oscar for. 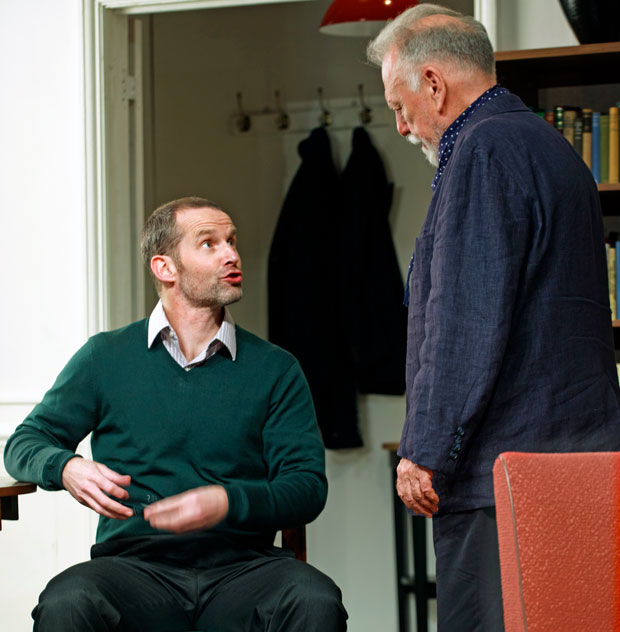 “I read the play and was completely blown away by it — it was heartbreaking. It’s written from the point of view of an elderly man who suffers from Alzheimers, so the audience experience the same confusion that he does. Ken Cranham (pictured right with Jim) who played the lead was outstanding and won several awards.

“My work over the past five or six years has been mainly in TV and film, as theatre jobs don’t come up all that often.”

Currently he can be seen in a new series just released on Netflix called ‘Gloria’, in which he plays a rather unpleasant character called Ronald Parker.

“It’s the very first Netflix Portuguese original production which hopefully will get a second season,” he said.

“I will also be appearing in a two TV shows coming out in 2022, which are very different.

“The first one is called ‘Liaison’ and it’s an espionage thriller, the second one is a comedy crime drama for the BBC, ‘Sister Boniface Mysteries’.”

Jim and his wife Sophie, whom he met when they were both acting in a short film, married on August 18 2012.

They now live in Beckenham where their daughter Lyra was born almost four years ago. His wife now runs her own very successful company.

In his spare time he enjoys watching football, clay pigeon shooting, and this year took up running, completing a 5k three times a week.

Does Jim have any lingering regrets about his dramatic career change.

“My only regret about leaving farming is that my daughter won’t be able to experience so much of the extraordinary things that I did growing up,” he said.

“Farming is a way of life, and you have to love it to be able to do it to be best of your ability and I just didn’t. I love what I do for a living now — I’m incredibly lucky and grateful that I’ve been able to make a living in this industry.”