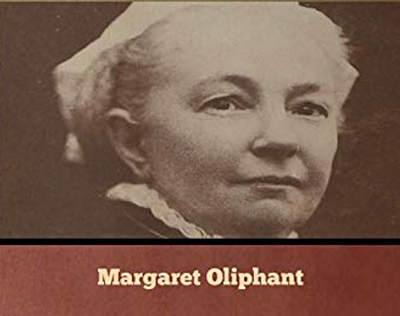 ROSNEATH was the setting for several of the stories written by the renowned Victorian writer Margaret Oliphant.

This remarkable woman is thought to have produced some 90 novels, 50 short stories, 250 articles for Blackwood’s Magazine, miscellaneous essays, and a number of non-fiction studies, including biographies and histories.

Some critics ranked her second only to George Eliot as a female novelist. But her private life was beset by one family tragedy or disappointment after another.

The marvel is that she continued to write through thick and thin. At one stage, she came to Rosneath, and although her time there was limited to two summers, it was a rare interlude of great happiness. 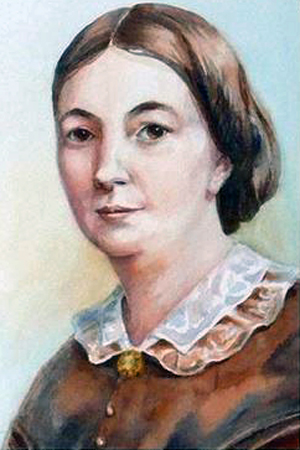 Margaret (right) was born on April 4 1828 at Wallyford, East Lothian, the daughter of James Wilson, a businessman, and Margaret Oliphant. Her father’s employment saw family moves from Wallyford to Lasswade, Glasgow, Liverpool, and London.

As Margaret grew up, she became an avid reader, and she began to write from an early age.

Her first story is believed to have been “Christian Melville”, but this was not published until 1856, a decade after being written, and was attributed to her wayward brother William, suggesting some reticence on her part.

Her first published novel was “Passages in the Life of Mrs Margaret Maitland of Sunnyside” in 1849. Despite the long title, it was reasonably well received by the reading public, and this encouraged her to continue.

Margaret had suitors from the age of sixteen, but it was Frank Wilson Oliphant, a maternal cousin, whom she married at Birkenhead in 1852. He was an artist, working mainly in stained glass, and this brought them to Harrington Square in London.

All seemed set for a happy married life. But dark clouds were already beginning to gather, and three of the couple’s six children died in infancy.

It was not long before family trouble emerged. Frank began to show alarming symptoms of the terrible scourge consumption, known today as T.B.

In some desperation, the family travelled to the Continent in January 1859, hoping the move to a better climate would assist his recovery. They passed through France, and on to Florence.

However, it was very cold there, and Frank’s condition grew worse. They moved on to Rome, by which time it was growing warmer, but Frank died there soon after. The family returned, first to England, then to Elie in Fife, and then to Edinburgh.

Margaret continued to write, but there were disappointments, with publishers showing a tendency to reject her work during this period. It must have hit her hard, particularly as she felt that with the death of her husband, she needed writing success to make ends meet.

Another family disappointment was the downfall of an older brother, Willie. He had trained for the ministry, but he fell prey to alcoholism.

Margaret took to supporting him, giving him some dignity by taking him on as her assistant, and paying him 10% of profits from her writing.

In November 1860 she met Robert Herbert Story, the young minister at Rosneath. He had heard that she was working on a biography of Edward Irving, the gifted but controversial churchman, and thought he could help. 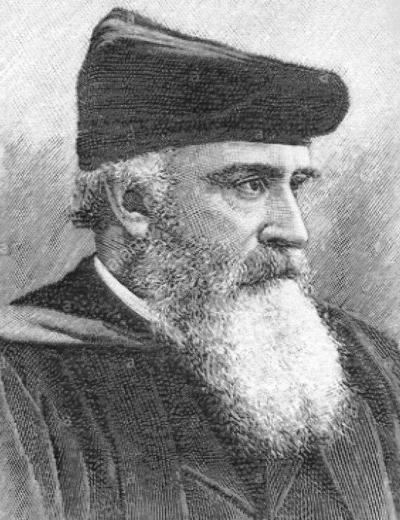 Story’s father, the Rev Robert Story (left), minister at Rosneath from 1818 until his death in 1859, had known Irving well, and had kept correspondence with him.

Irving’s interest in the Gareloch area was aroused through events centred round Mary Campbell of Fernicarry, Garelochhead, one of Story’s parishioners.

Mary was a sister of the already well-known Isabella Campbell (1807-1827), whose short life, perceived as saintly, had been made famous through a best-selling memoir by Robert Story.

Like her sister, Mary suffered poor health. From about March 1830, she was alleged by some to have acquired the so-called Gift of Tongues, while roughly at the same time, a Port Glasgow-based acquaintance, James McDonald, was similarly alleged to have acquired healing powers.  It was claimed he had healed an ailing sister, Margaret.

James had written to Mary, commanding the same words addressed to his sister: “Arise and stand upright” (derived from Psalm 20). Mary had seemingly regained her health as a result.

It appears that both Mary and James had been influenced by preachings on the part of the charismatic figure Alexander John Scott, late in 1829, when he had addressed gatherings at Row (Rhu) and Port Glasgow.

He in turn appears to have taken his cue on healing, prophecy and speaking in tongues from 1 Corinthians. Scott was employed as an assistant at Irving’s London Presbyterian Church.

These events attracted a great deal of interest, and in the summer of 1830, with Mary seemingly well recovered from her illness, she moved to Helensburgh, when meetings were regularly held.

Many churchmen, however — including Robert Story — treated these events with caution. Irving, on the other hand, while reliant on second-hand reports, appears to have been totally convinced that they were divinely inspired.

Robert Herbert, who had replaced his father as minister at Rosneath in 1859, was now encouraging Margaret to come to look at the correspondence.

Early in 1861, she did just that, and she was so taken by her reception that she decided to spend the summer on the peninsula.

She wrote in her autobiography about her stay, when she rented a house at Willowburn, Clynder: “I doubt I had ever been so gay. I was still young, and all was well with the children.

“My heart had come up with a great bound from all the strain of previous trouble and hard labour, and the valley of the shadow of death. There was boating, singing and Highland expeditions, all amusing, almost gay, as I had seldom been in my life before.”

At this time, Robert Herbert Story was aged about 25, and one commentator refers to him as “witty and flirtatious”.

This carefree image contrasts with a description of the same, but much older man, who went on to became Principal of Glasgow University, penned by a distinguished churchman: “Dr Story, tall and stately, was a man of first-class abilities and magnificent presence. He had a patriarchal white beard, an intimidating hauteur, severe classical features, and gypsy-black commanding eyes.”

Another visitor who called to see Margaret was John McLeod Campbell, deposed from his ministry at Row some 30 years earlier, through what became known as the Row Heresy Case. He too had known Edward Irving, and he was keen to help.

Margaret’s autobiography gave an unusual take on Campbell: “He was rather shocked, I am afraid, to find the biographer of Irving a young person (she was 33 at the time), rather apt to be led astray and laugh with the young people in the midst of his serious talk.

“Mr Campbell had been a very notable character in these parts, and he was at that time reverenced and admired as an apostle, though perhaps a little too much disposed, like everybody else, to talk too much of himself, instead of telling me about Irving, on whom my soul was bent.

“I have never had, I fear, a strong theological turn, and his exposition at family prayers, though I did my best to find it interesting, confounded me.”

Despite this disclaimer, religion and the church form key elements in many of her works.

She spent another summer back on the peninsula soon after, and there was a literary spin-off, with several stories set in the district.

One is called “A Son of the Soil”. As a work of fiction, some place names have been changed. Thus, the story begins at the farm of Ramore, similar to the real Mamore. The Holy Loch stands in for the Gareloch, while the Castle represents Rosneath House.

The central character is young Colin Campbell, son of the farmer at Ramore, who takes up studies for the ministry at Glasgow University. He befriends a much older man, Lauderdale, with whom he has serious discussions, often concerning religion.

There is also romance, when Colin falls for the vivacious Matty, a girl of high social status. The story contains an echo of Margaret’s own life, when Colin finds himself compelled to travel to Italy for health reasons.

Also produced were “Three Days in the Highlands” and “Among the Lochs”, which, while fictitious, are essentially travelogues, with various characters thrown in — some of them with people in her circle at Rosneath, including Story, Tulloch and Margaret herself.

Rosneath itself becomes Knocktarlitie, a gesture to Sir Walter Scott, who gives the village that name in “The Heart of Midlothian”.

These works were not the sum total of Oliphant’s output during this period. The first of her series of so-called Carlingford novels was completed in 1861. These were very well received.

Margaret was very proud of her Scottish heritage, with many of her works set in Scotland, but the English country house was another favoured location, and the Carlingford stories fall into this category.

Full-length novels were coming out at the rate of 2-3 each year, in addition to all her other work. Her biography of Edward Irving was  coming along, being published as two volumes in 1862.

Her happiness at Rosneath did not last. Early in 1864, Margaret’s surviving daughter, Maggie (11), died from gastric flu. In 1868, her brother Frank, who had emigrated to Canada, met with financial ruin. In 1870, his wife died.

Despite her own sorrows, Margaret was big-hearted enough to open her home to him and his children. Frank in turn died several years later. Yet another dependent was a niece, “Denny”, who herself had dependents.

Margaret has been accused of lacking the financial savvy to save, but with so many reliant on her, outgoings must have been considerable. So how much was she being paid for her efforts?

She gave one clue in her autobiography. She received £1,500 from John Blackwood, the head of the publishing firm, for her “The Perpetual Curate” (1864).

But the firm’s business manager was apoplectic with this generosity, suggesting it was significantly more than she would normally expect.

With the loss of so many of her family, Margaret became all the more protective of her two surviving sons, Cyril Thomas, the eldest, known as “Tiddy”, and Francis, known to her as “Cecco”.

Her desire to do the very best for them was shown by her move to Windsor in 1866, to be within easy reach of her boys, who were attending Eton College. However, neither ever enjoyed good health, and they were a source of great disappointment to her.

Cyril began studies at Oxford University, but never graduated. What he did succeed in doing was running up debts, but Margaret continued to support him. Cyril passed away in 1890, while Francis died four years later.

After that, her own health fell into decline, and she died in 1897 at Wimbledon. She was interred at Eton, beside her two sons.

She described writing as her “opiate”, and continued writing to the end, with two volumes of her “Annals of William Blackwood” published the year she died.

Although she was very popular until her death, the early 20th century saw a dramatic fall from grace. But her work has since been re-evaluated, and fresh appreciation of her talents emerged.

There has been recognition of her masterful portrayal of the social and religious life of the period, and her telling insights into human nature, sometimes carried with a fine sense of humour.

It is likely her work will grip the reader for years to come.